The Myth of Western Patriarchy 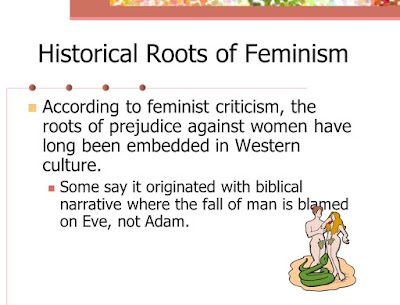 This illustrates the half truths circulated by Feminists. The big picture is quite different. The drama begins with Eve in the Garden and the New Paradise begins in the womb of Mary, the New Eve. Mary, the mother of Jesus Messiah, is the most honored woman in the world. She is honored in many religions other than Christianity.

In fact, the Feminist claim of universal patriarchy is a lie, or a convenient myth.

No, the structure of Western civilization is not patriarchal. Watch Jordan Peterson address this question.

Neither is the social structure of the biblical Hebrew patriarchal. This series breaks that down from the perspective of cultural anthropology.

Part 1 - Part 1 in this series addresses the Feminist claim that the biblical Hebrew had a patriarchal social structure. This unfounded assumption is the basis for attempts to justify the innovation of women priests. Since women were denied the opportunity to serve as priests among the patriarchal Hebrew the Church should ordain women to correct that social injustice.

Part 2 - Part 2 looks at the patterns of descent and shows that descent is is traced through both the paternal and maternal lines. A true patriarchy traces descent through the paternal line only. This is not a characteristic of the biblical Hebrew. Instead, they had a pattern of double descent. One expression of this is the twin entrance pillars of Solomon's temple. They are named Boaz and Jachin and the pillars commemorate Solomon's righteous ancestors on his maternal and paternal sides. Boaz was Solomon's great great grandfather on his father's side and Jachin was his great great grandfather on Bathsheba's side.

Part 3 - Part 3 considers inheritance and how rights of inheritance involve claims by both males and females. The inheritance laws among the biblical Hebrew are complex because the ruler had two first born sons. Provision was made for both sons to receive an inheritance. Additionally, grants were made to the sent-away sons of concubines. Daughters could petition to receive inheritance. By levirate marriage a widow was able to preserve her deceased husband's holdings for his son. In an extremely archaic practice, inheritance rights were attached to whoever had possession of the clan ancestor figurines. These were stolen by Rachel who knew that her husband Jacob (Israel) had no inheritance. If women did not inherit why did Rachel and Leah complain to Jacob, "Are we still likely to inherit anything form our father's estate? Does he not think of us as outsiders now?" (Gen. 31:14)

Part 4 - Part 4 looks at the right to rule. Feminists insist that the Hebrew woman's condition under Patriarchy is one of subjugation. Instead, we find strong, dignified, multi-talented, caring women who make a mark for themselves in the world. They invest wisely, oversee servants, and manage real estate. Some are so important that they are named in the Genesis king lists: Naamah, Anah and Oholibamah, are examples. Anah is called a "chief" in Genesis 36. Women also ruled as queens.

Part 6 - Part 6 looks at the question of governance. Do only men hold the reins of governmental authority? Decisions concerning governance were made by kings and queens. The Hebrew priests were in the service of these rulers. A Judean queen named Salome Alexandra ruled from BC 76-67. She was one of two women to exercise sole rule over Judea. Archaeologists have uncovered her palace in Jericho. Salome is the only woman mentioned in the Dead Sea Scrolls. Some of the religious reforms that shaped second-Temple Judaism were implemented under her rule.


Related reading: Are Feminists Correct About the Church?; How Feminist "Dambusters" destroyed the Church of England