The Development of the Nicene Creed 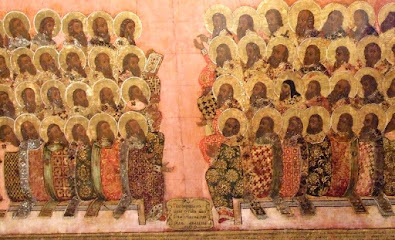 Icon of the Second Council of Nicaea


Though there are denominational differences among Christians, especially since the 16th century, Christians around the world agree on certain core beliefs. Many of these beliefs were clarified by councils of wise bishops, priests and deacons. This is why Christianity is described as conciliar.
In the history of the Church seven ecumenical councils have been especially important. These councils were called to resolve controversies surrounding Jesus Christ, the Virgin Mary, and holy images such as icons.

The Third, Fourth, Fifth and Seventh Councils address the veneration (honor) due to the Virgin Mary. The veneration of Mary was a common practice before the rise of Protestantism, and the oldest cathedrals have chapels dedicated to the Virgin Mary. Many statutes of Mary were destroyed by the Puritans under Oliver Cromwell's rule in England, and even today her image is an affront to those who hate her son. The destruction of images is called “iconoclasm.”
Martin Luther, the father of the Reformation, had much to say about the veneration of Mary. He wrote, "The veneration of Mary is inscribed in the very depths of the human heart." (Sermon, Sept. 1st 1522)
Luther also said, "People have crowded all her glory into a single phrase: The Mother of God. No one can say anything greater of her, though he had as many tongues as there are leaves on the tress." (From the Commentary of the Magnificat)

The Nicene Creed is a summary of the core beliefs of the Christian Faith.
We believe in one God, the Father Almighty, Maker (of heaven and earth, and) of all things visible and invisible.

And in one Lord Jesus Christ, the only-begotten Son of God, begotten of the Father before all worlds (æons), Light of Light, very God of very God, begotten, not made, being of one substance with the Father;

by whom all things were made (in heaven and on earth);

who for us men, and for our salvation, came down from heaven, and was incarnate by the Holy Ghost of the Virgin Mary, and was made man;

he was crucified for us under Pontius Pilate, and suffered, and was buried, and the third day he rose again, according to the Scriptures, and ascended into heaven, and sitteth on the right hand of the Father;

from thence he shall come again, with glory, to judge the quick and the dead;

whose kingdom shall have no end.

And in the Holy Ghost, the Lord and Giver of life, who proceedeth from the Father (Rome adds "and from the Son"), who with the Father and the Son together is worshiped and glorified, who spake by the prophets.

In one holy catholic and apostolic Church; we acknowledge one baptism for the remission of sins; we look for the resurrection of the dead, and the life of the world to come. Amen.

What follows is a summary of the decisions of the first Seven Ecumenical Councils.

1. First Council of Nicaea (A.D. 325) with 318 bishops present, including St. Nicholas of Myra, St. James of Nisibis, and St. Athanasius of Antioch, who was a deacon at that time.
As the first Roman emperor to claim adherence to Christianity, Constantine played a role in the proclamation of the Edict of Milan in 313, which decreed tolerance for Christianity in the empire. He called the First Council of Nicaea in 325. However, it is possible that Constantine did not agree with all the decisions of that council. His son Constantius II encouraged the Arians.

This Council was called to resolve controversy raised by the Alexandrian priest Arius, who rejected the Jesus Christ’s divine nature and eternal pre-existence as the second person of the Holy Trinity, the Son of God the Father. Arius taught that the Son of God is the highest creation. Therefore, in the Nicene Creed we affirm that Jesus Christ is “begotten of the Father, not made…”

2. First Council of Constantinople (A.D. 381) with 150 bishops present, including Gregory the Theologian, who presided over the Council, Gregory of Nyssa, and Cyril of Jerusalem.

This Council was convoked against the false teaching of the Arian bishop of Constantinople, Macedonius, who rejected the deity of the third Person of the Holy Trinity, the Holy Spirit. He taught that the Holy Spirit is not God, and called Him a created power like an angel, and therefore subservient to God the Father and God the Son. The Council affirmed as a dogma (unchanging truth) the equality and the single essence of God the Holy Spirit with God the Father and God the Son. The Council also supplemented the Nicene Creed, or "Symbol of Faith," with five Articles in which is set forth its teaching about the Holy Spirit, about the Church, about the Mysteries, about the resurrection of the dead, and the life in the world to come. This is called the Nicene-Constantinopolitan Creed and it serves as a guide to the Church for all time.

3. Council of Ephesus (A.D. 431) with 200 bishops present, with Cyril Patriarch of Alexandria as president of the council.

This Council repudiated the doctrine of Nestorius, Archbishop of Constantinople, who taught that the Virgin Mary simply gave birth to the Christ the man. He insisted that Mary be given the title Christotokos (Christ Bearer), but not Theotokos (God-Bearer), thereby denying that Jesus is God incarnate. Nestorius taught that God dwelt in Jesus, as God dwelt in a temple. The Council upheld the divine nature of Jesus Christ and that at the time of the incarnation he was of two natures, divine and human, and that being so, the Mary did indeed bear God. The Council also affirmed the Nicene-Constantinopolitan Creed, and strictly prohibited making any changes or additions to it (as happened when the Western Church added the words “and from the Son” to the Creed, referring to the procession of the Holy Spirit. This is called the “Filioque clause” and among Anglicans this phrase may be omitted when reciting the Nicene Creed.
4. Council of Chalcedon (A.D. 451) with 650 bishops present

This Council met to challenge the doctrine of Eutyches, an archimandrite of a monastery in Constantinople. In attempting to defend the full divinity of Jesus, Eutyches went to the extreme of rejecting the full humanity of Jesus. Eutyches taught that the human nature was completely absorbed into Jesus Christ’s divine nature (Monophysitism).The Council determined that Jesus Christ is perfect God, born by God, and perfect Man, taking his flesh from his mother Mary and in every way He is like us, except without sin.

The Council condemned monophysitism and deposed Dioscorus, the Patriarch of Alexandria. In 452, one year later, with the support of the Eastern Roman emperor Theodosius II, Dioscorus convened the Second Council of Ephesus (later denounced as the “Robber Synod”), where he reinstated Eutyches, and attempted to excommunicate Pope Leo I for his condemnation of Eutyches.
Some Eastern churches do not accept this judgment. These include the “miaphysite” Ethiopian Orthodox Tewahedo Church, the Eritrean Orthodox Tewahedo Church, the Coptic Orthodox Church of Alexandria, the Armenian Apostolic Church, the Syriac Orthodox Church, and the Malankara Orthodox Church of India. These are considered “Non-Chalcedonian” churches. Miaphysitism holds that in Jesus Christ, Divinity and Humanity are united in one nature (monism), the two being united without separation, without confusion, and without alteration.

5. Second Council of Constantinople (A.D. 553) was called by the emperor Justinian and Eutychius, the Patriarch of Constantinople, presided. (Eutychius should not be confused with the heretic Eutyches.) There were 165 bishops present or represented.

This council convened to address the heretical proposition that the Christ and Jesus were two separate persons loosely conjoined. This Council reaffirmed that Jesus Christ has two natures, fully human and fully divine, and that these are neither separable nor mixed.

6. Third Council of Constantinople (A.D. 680) with 170 bishops present, including St. Sophronius, Patriarch of Jerusalem, and St. Maximus the Confessor, who the Romans had tortured by cutting out his tongue cut and chopping off his right hand.

The Sixth Ecumenical Council also rejected several innovations, namely, the Latin Church's requirement that priests and deacons be unmarried, strict fasting on Saturdays during Lent, and representations of Jesus as a lamb [Lamb of God], or in any way other than in the form He appeared on the earth. This was intended to curb what was regarded as Roman idolatry.

The decrees were framed by the president Tarasius, and ratified by the acclamations and subscriptions of three hundred and fifty bishops.

By now the Church had to address the question of Hebrews who would affiliate with the Church. The Seventh Council decided: "Hebrews must not be received unless they are manifestly converted with sincerity of heart."
This Council was convened against the iconoclastic heresy, which had been raging for sixty years before the Council, under the Greek Emperor Leo III, who hoped to convert Muslims to Christianity. To do so, he thought it necessary to do away with icons. Emperor Leo’s son, Constantine V (741–775), held the Council of Hieria to make the suppression of holy images official. Veneration of the holy icons was finally restored and affirmed by the local synod of Constantinople in 843 A.D., under the Empress Theodora.
At the seventh ecumenical council it was determined that, “As the sacred and life-giving cross is everywhere set up as a symbol, so also should the images of Jesus Christ, the Virgin Mary, the holy angels, as well as those of the saints and other pious and holy men be embodied in the manufacture of sacred vessels, tapestries, vestments, etc., and exhibited on the walls of churches, in the homes, and in all conspicuous places, by the roadside and everywhere, to be revered by all who might see them. For the more they are contemplated, the more they move to fervent memory of their prototypes. Therefore, it is proper to accord to them a fervent and reverent adoration, not, however, the veritable worship which, according to our faith, belongs to the Divine Being alone — for the honor accorded to the image passes over to its prototype, and whoever adores the image adores in it the reality of what is there represented."

In keeping with the spirit of the early Middle Ages, there was an emphasis on every church having a relic enshrined in the altar. A relic consists of the physical remains or personal effects of a saint or venerated person preserved as a tangible memorial. All Eastern Orthodox churches and many Roman Catholic churches have altars containing relics. Many of the oldest churches in England have relics. Relics of St. Thomas Becket are housed in Trinity Chapel at Canterbury Cathedral. Recently, archaeologists have found the remains of four of the Puritan founders of the Jamestown Settlement and were surprised to find a relic among the items buried with Capt. Gabriel Archer.  (See 2015, Washington Post, “Jamestownexcavation unearths four bodies and a mystery in a box”)
The Councils rejected as heresy the belief of Nestorius because he divided the one Son and Word of God into two sons, and, on the other side, also rejected the heresies of Arius, Dioscorus, Eutyches, and Severus, because they maintained a mingling of the two natures of the one Christ.