Contrary to the view that the Jebusites were a Canaanite tribe, they were a widely dispersed population by the 16th century AD. Today some Jebu live in Nigeria and in ancient times, two Jebusite populations lived in Canaan. One branch lived in the region of Gilead and the other in and around Jerusalem which was a Jebusite stronghold before David’s time.
The two Canaanite groups of Jebusites maintained their solidarity, giving military aid to each other when needed. They were never defeated or driven out of Canaan by the Israelites. In fact, Jebusites served in David’s army and court. 1 Kings 9:20-21 states that Jebusites also served in Solomon’s kingdom.

Jerusalem was named for the Jebusites, as is evident in 1 Chronicles 11:4 – “David and all Israel marched to Jerusalem, that is Jebus, where the Jebusites were, the inhabitants of the land.”
David purchased a threshing floor from the Jebusite chief Araunah and used the site to erect an altar to God. Threshing floors were sacred places among many biblical populations.

The Jebusites had been living in Canaan for many centuries. Jerusalem in Abraham's time was called Salem and the King of Salem was Melchizedek, "the priest of the Most High God." (Gen. 14:18) The Jebusites built their royal complex on the southeastern hill of Jerusalem.

Jesus enters Jerusalem on Palm Sunday
The waving of palm branches to greet kings and high priests who entered the city appears to have originated with the Jebusites.
Jebu rulers are installed with branches from the Igi ọ̀pẹ (palm tree). As a child, Jude Adebo Adeleye Ogunade was warned not to touch the leaves of the Igi-Ose tree, because as his Mama Eleni explained: "That tree is the tree whose leaves are used to install Chiefs and Kings of Ijebu and as your grandfather was a custodian of the rites of chieftaincy and kingship you must not play with its leaves." The Igi Ose is a Baobab and it is used in arid areas in ceremonies as an alternative to the Igi ọ̀pẹ.
The terms Jebu and Yebu are probably related. The Jebusites apparently dispersed along the Nile. Yebu was a principal shrine on Elephantine Island in the Nile. The history of Yebu extends back to 3000 BC. It was the original 'border town' between Egypt and the Nubian lands to the south and in ancient times was an important strategic position both for the defense of the border and as a trading route.
The Jebusites are an ancient people with a tradition of kings and priests. Today their presence in the Middle East is less evident than in Nigeria where they are known as “Ijebu.” As with the Canaanite Jebusites, the Ijebu are divided into two groups: the Nago-Jebu and the Ketu-Jebu. Both divisions take the serpent as their totem. Ketu and Naga are two ancient words for serpent. In ancient Egyptian literature the cosmic serpent is called Rahu Ketu who threatens to devour the Sun (solar eclipse). This suggests that the Jebu moved into Nigeria from the Nile Valley. 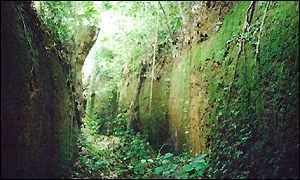 Eredo rampart
John Lliffe reports in his 2007 book Africans: The History of a Continent that in 1500 AD Ijebu Ode was "a very large city" (p. 80). To the southwest of Ijebu-Ode is the largest pre-colonial monument in Africa. Local people link the Eredo boundary walls to Bilikisu Sungbo, another name for Sheba, according to the late Patrick Darling, the British archaeologist who drew world attention to the Eredo system of walls. He reported, "We are not linking what we found to a city, but to a vast kingdom boundary rampart." The wall system runs for 100 miles and is 70 feet high.
T. O. Ogunkoya's The Early History of Ijebu also claims the Jebu presence in Nigeria goes back to the 16th century.  However, it is possible that the Jebu came there from the east where they had deeper roots historically. The Eredo discovery links Jebu territory and Sheba in ancient Yemen. There is evidence of other populations migrating from the east to Nigeria and Niger (See A Brief History of the Lake Chad Region.) 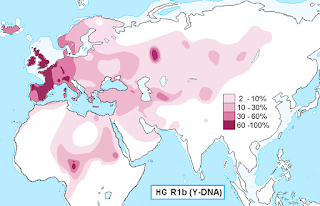 The genetic studies of some populations (Kanembu, Ouldeme, Daba, Daza, Fali, and Tali) in Northern Nigeria, Niger, Chad, and Cameroon reveal paternal ancestry of Y-DNA Haplogroup R1b as shown on the map above. This further suggests a connection between some populations of those countries and some populations living in lands to the east.
Today the two IJebu provinces are called Jebu Remu and Jebu Ode, and the title of their high king is "Awujali.” The IJebu are classified as Yoruba, but the term 'Yoruba' was applied to related groups after the 18th century. 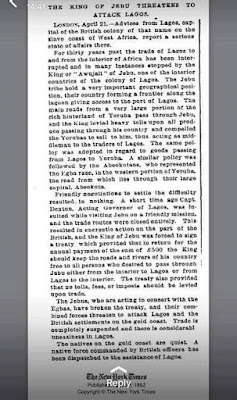 In 1892, the New York Times reported on the Jebu control of the water systems of the Benue Trough extending to the Port of Lagos. The headline (shown above) reads "The king of Jebu threatens to attack Lagos."
Related reading: The Judean Palm; The Trees of Prophets; A Brief History of the Lake Chad Area
Posted by Alice C. Linsley at 10:30 PM

What if The Jebusites are the Jebala tribe of Morocco ?
yes I agree that they may have some types of relationaship with many sub-saharian tribes but let us not forget that many African tribes have Berber origins and some relations with the Sahara.
Thank you for this wonderful blog.

It is not possible to determine the relationship of the Jebala without DNA tests and research into their history. The linguistic relationship between the names Jebala and Jebu is not sufficient because there are many populations in Africa with similar names. The Jaba of Benue and the Juba of Somalia are examples.

Dr Linsley, I have thoroughly enjoyed reading dozens of articles in this blog. Do you have a book out or forthcoming that connects your research, organizing it in a single or multiple volume?
As a Christian, I find your research to be invigorating for my heart, mind and soul.
However, I struggle to get the “full picture of the elephant,” to use the metaphor. I have learned what I thought were horns are in fact tusks, and that this large floppy thing is an ear and not a wing, but I am looking at the elephant through a telescope, studying detail by detail, unable as yet to reorganize these details into a full picture / macro perspective of the elephant, that is, a full picture of early mankind and the genesis of our faith.
If not, do you have a recommended order of reading of the posts already written?

I am finishing a book on The Social Structure of the Biblical Hebrew. I hope to take that and another complete manuscript to a book agent early in 2022.

When the book is published, I will announce it at this blog.

In the meanwhile, consider joining the international Facebook group The Bible and Anthropology where we delve deeply into topics that might interest you.