Nimrod was a Nilo-Saharan Ruler

The term "Kushite" is a general term for people who lived in the region of Kush at a time when the Nile was much wider. This included many peoples. Among the Kushites were the Ainu, red and black Nubians, Horites, the Ar or Aro, and the Beja. 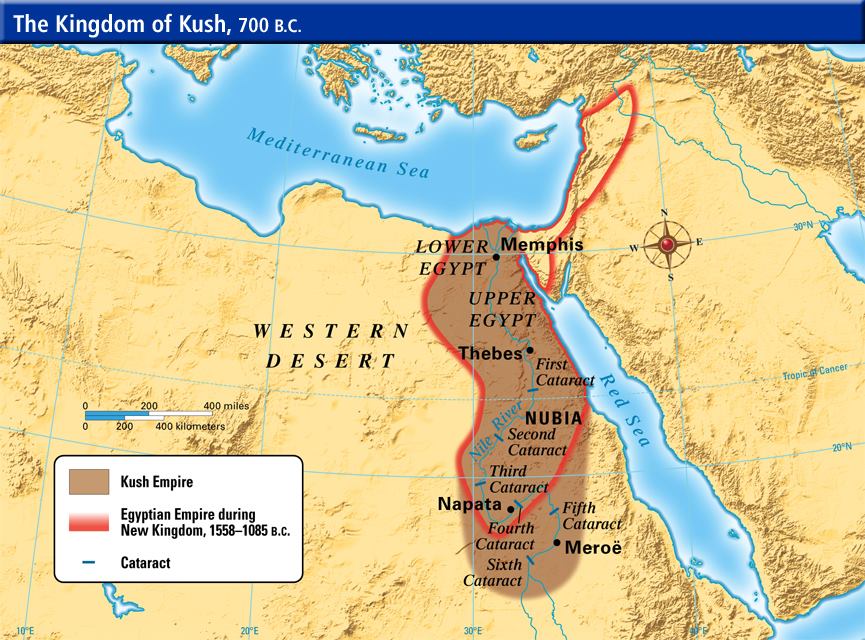 The Kushites were the first to unite the Upper and Lower Nile and their influence is seen on the earliest dynasties of Egypt.

The point of origin of Kush is likely the Sudan and the region of Lake Chad and must date to at least 2200 B.C. Kush is listed as one of Noah's grandsons and Noah lived about 2490-2415 B.C. Kush was the father of Nimrod, another great kingdom builder of the ancient world. Wherever the Kushite rulers went they took their royal priests and scribes. The Kushite religious life diffused through the agency of these ruler-priests. They built their shrines and temples along the major water systems and were instrumental in collecting taxes for commerce along the waters they controlled.

Before the Kushites were the Nilo-Saharans and among them was a hunter-gatherer king called Nimrod. Luo scholar Wander Salmon has connected his name to the name of a Luo price who is the ancestor fo the Luos in Tanzania. His name was Kadhirondi, which means go and gather, fetch, collect, or hunt in Luo. Rondi and rod are cognates. So in the Nilotic context, Nimrod's name fits his Biblical description as a great gatherer or hunter for the Lord.

Anthropologically speaking, we might describe Nimrod as a great hunter-gatherer chief who left his home and established a territory in the Tigris-Euphrates Valley. He is "En-Meru" in Sumerian, the chief hunter, or the lord/master/leader (En) of hunters. In Akkadian, the chief or ruler is called sar. Compare this to the Hebrew word that appears in the Targum nah shirkan = hunter, and note the similarity to the Hausa word sarkin maharba = lead hunter.

He would have been served by warriors and priests. Some of these priests were Hapiru or Habiru (Hebrew). The designation is a reference to the Sun. The Arabic yakburu means “he is getting big” and with the intensive active prefix: yukabbiru means "he is enlarging."  This refers to the morning ritual of Horite priests who greeted the rising sun with prayers and watched as it expanded across the horizon.

The oldest known center of Horite worship is Nekhen (Hierakonpolis) in Sudan. Votive offerings at the Nekhen temple were ten times larger than the normal mace heads and bowls found elsewhere, suggesting that this was a very prestigious shrine. Horite priests placed invocations to Horus at the summit of the fortress as the sun rose. This is the origin of the morning ritual whereby the sun is blessed daily in every devout Hindu home and the Jewish Sun Blessing ritual (Birkat Hachama) that is performed every 28 years.

The Egyptians called the temple priestly attendants ‘pr.w, the w being the plural suffix. This has been rendered *wap'er by the Afro-Asiatic language expert Christopher Ehret. The *wap'er had significant political authority alongside the ruler. They presided over the rituals directed toward the High God Ra and acted as intercessors between Ra and the community.

The Dravidian east-facing temple was termed O-piru, meaning “Sun House” or “House of the Sun.” Sar-gon I (Nimrod) is said to have been the son of a virgin queen who was overshadowed by the High God. He was born in an O-piru. His home city was called Azu-piranu, meaning House of God (Azu in Akkadian, Asa in Chadic, Asha in Kushitic, Ashai in Hebrew; a Jerusalem priest was named Am-ashai in Neh. 11:13).

Many Dravidian shrines and monuments are now submerged under the sea, but originally they were on land that bridged the Arabian Peninsula and southern Pakistan and southwestern India. These settlements are sometimes referred to as the "Har-appa" civilization. Har refers to Horus and "appa" is the Dravidian word meaning father. The origin of Dravidian religion was apparently Egypt and ancient Kush from which the Horites came. Har-appa means Horus is father, just as today a Jew might refer to his father as "horeh" and to his ancestors as "horim" (Horites).

In the ancient world, a temple was considered the mansion (hâît) or the house (pirû) of the deity. The Creator Re is associated with the temple in Heliopolis (City of the Sun) on the east side of the Delta. Hat-Hor, the virgin mother of Horus, had her principal temples in Dendera and Memphis to the south of Heliopolis and on the west side of the Nile. The principal temples of Horus were further south in Nekhen and Edfu, and on the west side of the Upper Nile. Doubtless, the position of these temples relative to one another is significant and entails research beyond the scope of this essay.

Re, Hat-Hor and Horus represent the Egyptian Triad, in which Horus and his father were said to be “one.” Christians will recognize that Jesus makes this same claim concerning Himself in John’s Gospel, “I and the Father are one” (John 10:30). He says this in the context of a shepherd-priest. Horite priests kept flocks and sacrificed animals from these flocks. This is why their shrines were always located near sources of water such a river, a well or an oasis.

Against those who claim that Abraham's Horite ancestors were polytheists, we note that among the many divine powers (baals) of the Egyptians only Horus and Hathor are ever shown in human form, and usually together, as the Virgin Mary and the Christ Child are shown together in Christian iconography. Re’s presence is symbolized by the Sun, but he is never shown in human form.

Kushite rulers, like Egyptian rulers, did not name their biological fathers in their king lists. This is because they believed that the ruler-priest was the son of Re whose emblem was the sun. The Pharaoh was called "son of Re" which is why Egyptian texts never mention an earthly father of the king. Kingship was rather a manifestation of the solar deity's overshadowing of noble women. Sargon the Great (Biblical Nimrod) claimed not to know his father.  He based his authority to rule on the suggestion that he was conceived according to the Kushite myth of miraculous virgin conception.

Nimrod, one of Abraham's ancestors, was a great kingdom builder. He was ethnically Kushite but was probably sent away from his older brother Ramah whose territory was in northern Arabia. This explains why he regarded his mother as "lowly." She would have been a woman of less wealth and status than the wife of Ramah, Kush's the firstborn son. After numerous conquests, Nimrod’s territory was far greater than his brother’s. It extended the length of the Tigris-Euphrates Valley and within this territory there were three principal cities: Babel, Erech and Accad in the plain of Shinar (Gen. 10:10). The script used to communicate across Nimrod’s empire is called “Akkadian.”

The conquest of the Sumerian city states by Kushites rulers is well-documented. Sargon the Great lived from about 2290 to 2215 BC, which is when his son Rimush (Ramesh) by his sister-wife ascended the throne. Alternative dates for Sargon the Great are 2360-2279, but these dates likely refer to his maternal grandfather after whom he was named. It was Sargon the Elder, not Sargon the Great, who conquered Nippur in 2340 B.C. and established his capital in Accad.

Sar-gon is the name by which Nimrod of the Bible is remembered in history. Sar-gon is a title meaning High King or King of Kings. The Elamite word for king is sunki, a cognate of the Hahm/Hamitic sarki, meaning king. The Sumerian word for king is sar and the Chadic word for ruler - gon.

The Igbo researcher, Dr. Catherine Acholonu, reports that in Nigerian lore Nimrod is known as Sharru-Kin which is interpreted to mean “the righteous King.” Nimrod's Akkadian name was Šarru-kīnu, which is usually translated “the true king.”

Many of the place names of Sar-gon’s kingdom in Kur-gal match places names in ancient Kush. For example, Akkad is Agade, which is the original name of a river settlement in Odukpani, Nigeria. (Its geographical coordinates are 5° 29' 0" North, 7° 58' 0" East.) The name Akkad is also related to the name of the city of Agadez in Niger, with a long association with metalworkers. Sargon’s territory was called Kish, which is Kush. One of the cities of his territory was Mari which is the Egyptian word for Mary. Another was Yar-muti (Old Arabic) which means Obedient (muti) Friend (yar).

A seventh century Assyrian text says that Sar-gon's birthplace was a city on the banks of the Euphrates called Azu-piranu. It was a Horite shrine as evidenced by the word piranu. The Habiru devotees of Horus called a temple O-piru, meaning "House of the Sun." Azu is the East African name for God - Asa. So Azu-piranu means “House of God” and is equivalent to the Hebrew word Beth-el.

The evidence is conclusive that the Afro-Asiatic Dominion was essentially Kushitic and a vehicle for the diffusion of Horite worship. Dr Christopher Ehret has expressed this succinctly in his treatise "History in Africa."  He writes, "The linguistic, genetic, and archaeological evidence combine in locating the origins of this family far south in Africa, in Eritrea or Ethiopia, and not at all in Asia. A complex array of lexical evidence confirms that the proto-Afrasian society belonged to the pre-agricultural eras of human history." (p.4)

"The Dravidian east-facing temple was termed O-piru, meaning “Sun House” or “House of the Sun.” Sar-gon I (Nimrod) is said to have been the son of a virgin queen who was overshadowed by the High God. He was born in an O-piru. His home city was called Azu-piranu, meaning House of God (Azu in Accadian, Asa in Chadic, Asha in Kushitic, Ashai in Hebrew; a Jerusalem priest was named Am-ashai in Neh. 11:13)."

My Chaldean boss was Azu (called Aziz in Arabic). Is that cognate to Yoruba Oalu? My friend's last name is Oaluwale (I think it means "god visits my home").

O-Piru combines the pictograph for the Sun with the Dravidian word for temple/shrine. Ta-piru is the ancient Kushite word, as in ta-seti, which means Land of the Bow.

There is a close correlation between Dravidian-Elamite-Akkadian and ancient Kushite words.

The Kushites were the first to unite the regions of the Upper and Lower Nile and spread from there to Pakistan and southern India.

Hello, Dr. Alice Linsley. I must confess that since I found you and your writings on the internet, my interest in the history of ancient Africa has grown significantly. Your research and scholarship, I've found, are always based on facts that can never be controverted or impeached. Your scholastic honesty is truly heartwarming and very encouraging.

"NIMROD WAS A KUSHITE RULER"

The Hausa ethnic people of Nigeria's word for king is sarkin(seriki). The Hausas are said to have migrated to northern Nigeria from the Baghdad area bordering the Elamite province of Khuzestan. Note the Elamite word 'Hauja' or 'Huja' as possible origin of what later became Hausa. Please read more on this wikilink:https://en.wikipedia.org/wiki/Khuzestan_Province

Also, I thank you for the brilliant, well researched essays, including the ones on Abraham's Kushite ancestors.

There is also a Hausa city called Sarkin Pawa.

Amah, I am glad that you are finding the essays helpful. Thank you for mentioning the Hausa connections.

I am aware of the story about the Hausas descending from a great chief who migrated to Nigeria from Baghdad. I am somewhat suspicious of the historical accuracy of this story, however. It is a later narrative than the material we have in Genesis. I think it more likely that there was a fairly steady back and forth flow of Afro-Arabians between the Sahara and Iraq from at least 1200 BC.