Atrahasis and Noah: Similarities and Differences


The "Ark Tablet" of just twenty lines was recently translated by British Museum scholar Irving Finkel. It is an Old Babylonian account in which the deity instructs the Babylonian ruler Atrahasis on how to build and waterproof a circular basket-like boat or coracle. The tablet dates to 1900-1700 B.C. so it reflects a time about 400-600 years after Noah. Scholars note both similarities and differences between the Genesis flood narrative and this account. 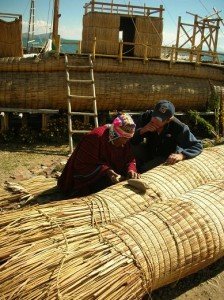 Atrahasis' boat was constructed from a large quantity of palm-fiber rope, sealed with bitumen, and it was large than the coracle shown above. His boat had a diameter of 230 feet across and the walls were 20-feet-high.

According to Genesis 6:14, Noah's ark was make of reeds (גפר gopher), a building material that was plentiful in the Lake Chad region where he lived during the African Aqualithic. The word is found only one other place in the Bible. Moses' mother put him in a reed basket which is called an "ark" in Exodus 2:3. This is why some Bibles read: "Make yourself an Ark of gofer wood, with reeds make the Ark" (Schocken Bible, Vol. I, p. 35)

The marsh Arabs of Iraq also build boats out of reeds like this. The bundles of hollow reeds give considerable buoyancy to the vessel. Thor Heyerdahl learned from the Marsh Arabs that if the reeds are cut in August they retain their buoyancy rather than absorbing water. Reed boats of this type were about 60 feet long and were capable of carrying 50 tons of cargo when fully loaded. 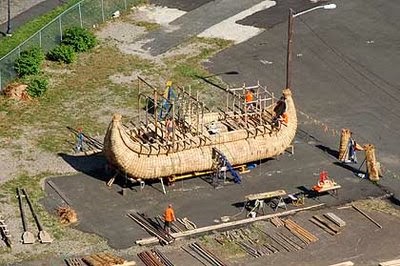 A motif common to both Genesis and the Babylonian Ark Tablet is the preservation of animals in pairs. A male and female set would be necessary to perpetuate the species. These stories pertain to great rulers of the Ancient Afro-Asiatic Dominion who kept menageries of exotic animals.

Athenaios of Naucratis reports that a white bear was housed by Ptolemy II in his private zoo at Alexandria. The oldest known zoo was in Nekhen, a Horite shrine city in Sudan. It is the oldest known city dedicated to Horus. The Nekhen ménagerie existed in the middle of the second millennium B.C. It is believed that the local ruler kept powerful wild animals as symbols of his power.

Atrahasis' name appears on one of the Sumerian king lists as the ruler of Shuruppak. Noah's name is listed in the Genesis king lists. Noah lived approximately 2490-2415 B.C., when the Sahara experienced a wet period (Karl W. Butzer 1966). The wet period is referred to as the African Aqualithic, the Gurian Wet Period, or the late Holocene Wet Period. This period corresponds to the Old Kingdom, a time of great cultural and technological achievement in Sudan and Egypt.

Noah and the rulers named in the Genesis 4 and 5 king lists controlled the major water systems of Lake Chad, the Nile, and the Tigris and Euphrates. The interconnected waterways were their roads. They were familiar with boat construction and likely had fleets. However, every aspect of the ruler's life was to be under divine direction. This included the codification of laws, such as the Law of Tehut (3200 B.C.), and the construction of ships.

According to Genesis 6:19, Noah brought onto the ship a male and female of each animal he saved. However, Genesis 7:2 says that he brought on seven pairs of only "clean" animals. Clearly, there are two flood accounts, just as there are two creation stories. These divergent accounts represent different traditions among the ancient Afro-Asiatics.

Related reading: New Fragment Reveals More About Humbaba; Answers to High Schoolers' Questions About the Flood; Noah's Flood: Where and When?; The Afro-Asiatic Dominion; When the Sahara Was Wet; The Ancient Egyptians Were Seafaring; Gap Theory or Gap Fact?