When we consider ancient wisdom literature, we tend to think of books like Job, Proverbs, or the Wisdom of Ben Sirach. The word "wisdom" does not appear in the book of Genesis so some might assume that the first book of the Bible does not touch on this subject. However, from an anthropological perspective, Genesis reveals the antecedents of wisdom literature in the Bible.

Leon Kass touches on wisdom in Genesis in his book The Beginning of Wisdom: Reading Genesis. He explores the ethical dimensions of Genesis as a physician committed to teaching it as a defense against the "antiwisdoms" of modernity (p. 4). He hopes his book will help Jewish “children of skeptics” to understand why their predecessors found Genesis compelling and illuminating. Kass is critical of how science abandoned "the large metaphysical-theological questions and spiritual-moral concerns that preoccupied" ancient Man, and most especially Abraham's people (p. 5). He explores the Genesis text as a coherent whole. His approach is to gain practical wisdom for today and his method is dependent upon psychological insights and insights from the Talmud.

Kass sees the patterns in Genesis and explains that Genesis speaks not about "what happened, but what always happens" (p. 10). He maintains that Genesis is "instructional narrative" (p. 79). Joseph and Solomon married women of the royal Egyptian court and both men embody wisdom in the Old Testament. On closer examination, we see that these rulers had much in common.

Imbued with wisdom from God, Joseph is recognized by Pharaoh as wiser than all the royal wise men. He speaks as one with authority. Solomon also is a wise teacher, as is evident in the Proverbs.  Indeed, the 3000 year old Egyptian text Teaching of Amenemope suggests that Solomon's Proverbs were based on an older tradition whereby royal sons were taught. Solomon married Pharaoh's daughter and there was a close relationship between the Egyptian court and Solomon's court (Currid, 1997: 159-171). It is likely that Solomon had royal advisers, but the biblical text places emphasis on Solomon as the righteous ruler imbued with divine wisdom (another Messianic allusion). The similarities between Proverbs and the Teaching of Amenemope can be explained by the fact that the Hebrew (Habiru) were blood relatives of the Nilotic rulers and priests who preserved the tradition received from their Horim. Ibn Erza holds that the phrase al-tifra-u in Proverbs 8:33 means "don't change the order." The verse says: "Listen to my instruction and become wise. Don't change the order." The rulers and priests felt constrained to preserve the tradition of their Horim (Horite ancestors).

In the minds of the rulers named in Genesis, wisdom is the Lord's instrument by which He created all things (Psalm 104:24). "God founded the earth by wisdom; by understanding he established the heavens; by his knowledge the deeps broke open, and the clouds drop down dew" (Prov. 30:20).

Wisdom “came forth from the mouth of the Most High and covered the earth like a mist” (Sirach 24:3). Here we have an allusion to Genesis 1:1 which speaks of the Spirit (ruach/wind/breath) going forth from the Creator to establish order in the chaotic deep. In Job 32:8, Elihu declares that it is the spirit in a man, the breath of Shaddai, that gives him wisdom.

Such wisdom is given to righteous rulers who seek it. God rewards the ruler who seeks wisdom above power and wealth (2 Chronicles 1:11). Wisdom expresses itself in good governmental administration (Gen. 41:8-43). It is demonstrated in mathematics, engineering, architecture, as expressed in this statement: "Wisdom builds her house" (Prov. 9:1).

Wisdom/skill is chokmah (hokma) in Hebrew and is related to chakam (hakam) which refers to a wise or skillful royal official. Hakam is the word found in the Genesis 41 narrative, where we are told that Pharaoh called for his wise men and, after they failed to interpret his dreams, he called for Joseph. Joseph interpreted the dreams and also gave Pharaoh unsolicited advice on how to prevent catastrophe. The king of Egypt than declared that there is none so wise and discreet as Joseph. Joseph was elevated to a position that made him like a "father" to the king (Gen 45:8). Joseph never claimed to have wisdom of his own. He relied on God to give the meaning of the king's dreams. If Pharaoh was regarded as a "son" of God and a deified ruler, how much more would Joseph as Pharaoh's "father" have been regarded as deified? So Joseph, rather than Pharaoh, becomes the archetype of Christ.

Kass notes that both Joseph and Solomon, the wisest men in the Old Testament, are attached by marriage to the royal house of Egypt. He sees this as the reason for the moral failure of both rulers. However, these were not "foreign wives" who led their husbands astray. Joseph and Solomon were of Horite ancestry, and by marrying into that caste, they were reconnecting with the Horites of Egypt. These were the keepers of the wisdom they received from their Nilo-Saharan ancestors at Nekhen. They preserved the ancient science and technologies that made Egypt great.

The Horites of Edom (Gen. 36) built a temple in honor of Pharaoh's daughter. This was Petra's central temple and it was called Qasr al-Bint al-Faroun, which means "The Fortress of the Daughter of Pharaoh." The walls rose to over 75 feet. At its height of glory, Petra rivaled the grandeur of Herod's Jerusalem. The skill exhibited here is the wisdom of the Horites.

The Horites traced blood line through the mother. Married women held and bequeathed property, and a few even ruled over their clans. Anah is listed as a "chief" in Genesis 36. Her name is also spelled Anat and Anath. Joseph married the daughter of a Horite priest of Heliopolis, the most prestigious shrine city of the ancient world. Her name was Asenath, a variant of Anath. 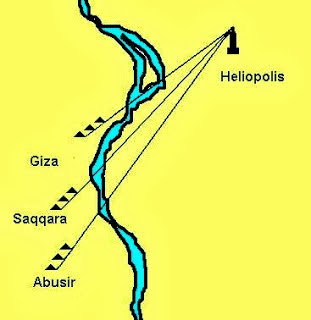 In 2010, the tomb of a Horite priest was discovered south of the cemetery of the pyramid builders at Giza. It belongs to a priest named Rudj-Ka (or Rwd-Ka). Rwd-Ka was a purification priest serving the house of Khafre (2520-2494 BC), the pharaoh who built the second-largest pyramid at Giza which was aligned to the obelisk of Heliopolis. This was an important priest and scribe of the Egyptian royal court as evidenced by his several titles. Rwd-Ka means "deified ruler of the sphere or realm."

The Horite priest was purified before entering the temple. His purification involved fasting, abstinence from sexual relations and alcohol, ritual bathing, and an intense period of prayer. Korah, Moses' half-brother, was a priest according to Numbers 16:17,18. His name means "shaved one." Horite priests shaved their heads and bodies as part of the purification ritual. Joseph shaved before he appeared before Pharaoh (Gen. 41:14).


Related reading:  The Enigma of Joseph; Seats of Wisdom; Leon Kass on Genesis; Diplomatic Communities of the Old World Middle East; Joseph as a Wise Egyptian Diplomat; Who Were the Horites?; Horite Deified Sons; Genesis in Anthropological Perspective

*** He sees this as the reason for the moral failure of both rulers.****

What evidence is there of a moral failure of Joseph?

Marriage to Asenath is not an example of moral failure on Joseph's part. Here Kass draws on Talmudic sources which are not authoritative for Christians and which often obfuscate the Christological significance.

Kass also suggests that the way in which Joseph plays cat-and-mouse with his brothers represents moral failure.

I suppose you could ding him for tempting his brothers out of the promised land and not returning himself (at least in life). Obviously it was God's will for His people to live in the land He gave them and not Egypt.

Hannah, and the wife of (Danite)Manoah, and the virgin Mary all went through an 'annunciation', where the "angel of the Lord appeared" is this the same as the Holy Spirit Overshadowing? There are phrases in the Egyptian 'Hymn to Aten' using similar words.

Regarding animal analogies, some interesting parallels:

Divine annunciations are found in many sacred writings. This is not the same as overshadowing.