For some time I have been exploring the possible connections between the ancient Annu of the Upper Nile, the Ainu of Hokkaido and Okinawa, and the Ainu of Canada's eastern seaboard. Recent DNA studies have revealed that the Ainu of Hokkaido and the Ryukyuans of Okinawa have a closer genetic affinity than either group has to the Japanese. The Ainu of Japan possess almost exclusively Haplogroup D-M174 chromosomes.

One theory is that the Ainu migrated to Japan from the Nile Valley by a northern route. 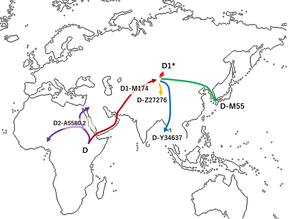 It is likely that they migrated by a southern route also and that there were different periods of migration. There is no doubt that the Ainu dispersed widely during the late Paleolithic and Neolithic Periods. "Ainu moshir" refers to the Ainu homeland, which includes many regions in which Ainu live. Tessa Morris-Suzuki has written that the geographical boundaries of the dispersed Ainu populations have never been precisely identified, and even the Ainu themselves are not able to identify all of them.

The ancient Nilotic Annu/Ainu were associated with the shrine at Heliopolis (Biblical On), one of the most prestigious of the ancient world. Anu is also the name of their God in Akkadian, suggesting that the Nilotic Annu were a preist caste that also migrated into Mesopotamia.

Still missing is a definitive DNA study of the Micmaq Ainu of Canada. The information I provide here comes from a Canadian Ainu informant whose grandfather was pure Ainu. There are also Ainu living in western China, but I have little information about them.

The connections suggest a dispersion of Proto-Ainu much earlier than I would have guessed. The Ainu today appear to be the descendants of the prehistoric Wa. This indicates a connection back to Africa and to the Y-chromosomal Adam and Haplogroup A. The San are in Y-DNA Haplogroup A. This group is the foundation of all known patri-lineages carried by modern humans. However, Haplogoup A is found only among men in Africa, or among men outside of Africa of recent African extraction. The Ainu are in Y-DNA Haplogroup D, found in Northern Japan and Okinawa.

The Khoisan-Japanese connection calls for further research. The Arabic name for the San is Wakwak. The Sandawe (Tanzania) call the Bushmen Wanege. Wa was the earlier name for Japan and the word appears in the name Okina-wa.

While the Khoisan do not have a word for priest, they do recognize the role of the holy man who makes pure after blood is shed. W'b in ancient Egyptian refers to the priest caste, the pure ones, and the healer priest was called wab sxmt (wab sekhmet). There is an interesting connection to the Sumerian word wasabu which means to sit. The Egyptian word wabau is likely related. It refers to a healer-priest, one is sits by the sick person.

A comparison of the Kata Japanese and Hebrew scripts reveals a connection that is likely explained by the fact that the earliest scripts were those used by priests attached to rulers over many regions worldwide. 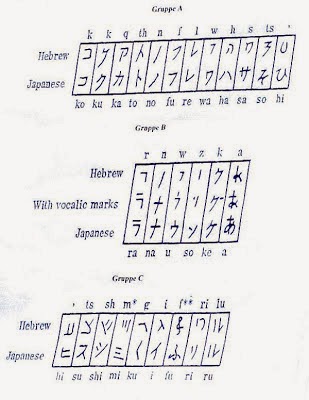 A scribe called Wani Kishi is said to have brought Kata to Japan. It is used by the Ainu of Northern Japan. Japan's earliest known population was Ainu. The Kojiki indicates that Wani Kishi arrived sometime after 372, but before 375 AD. Kata was a priestly syllabic system, similar to Hebrew. Wa-kishi is an African term that refers to the ancestors.

There is artifact evidence of connections also. Consider the similarity between these two garments.

The Ainu attus is made from the fiber of an elm tree native to Hokkaido. This traditional robe bears close resemblance to the traditional African dashiki.


Luigi Cavalli-Sforza's genetic distance chart places the Ainu rather distant from the Bushman, but the anthropological and linguistic suggest a connection. Given this scheme, the dispersion of the ancestors of the Ainu out of Africa has to have taken place before the separation of Africans and Asians. Still, more research is needed.

The anthropological and linguistic evidence along with the evidence of migration studies strongly suggests that the urheimat of the ancestors of the Japanese Ainu and the Micmac Ainu of Eastern Canada may have been the Nile Valley. The genetic evidence is still outstanding. Molecular Geneticist, David Wilcox has written:

Let me clear up how the genealogies like Cavalli-Sforza's should be viewed. The position of the branches doesn't mean much - what counts is what they are connected to. Each branch point represents a point where two lineages diverged. The Japanese Aniu in the diagram are genetically closest to the group containing Japanese, Koreans, Mongols, Samoyed and Tibetian in their overall genomes. The present day Nilotic peoples are part of the African complex at the top. The distribution of the Haplogroup X (which did indeed arise from N in the Middle East - maybe 30 to 40,000 years ago), on the other hand, is interesting and might indeed indicate a migration from Europe rather than Asia - but it could also indicate an early migration from the west which was pushed eastward by the further migrations from Asia.  I'm not sure what to think about it, but I would suggest that a few of the Micmac people submit their DNA to the National Geographic project for tracing migrations and see what sort of result they get - preferably someone from the easternmost area which has the highest level of X, and thus probably the lowest level of Asian admixture.

The genetic evidence connecting the Ainu of Hokkaido and Okinawa with the Edo of Nigeria is rather more substantial. The latest writings indicate a consensus that YAP’s origin is in West Africa (Nigeria), with a founding derivative clade in the ancestors of the Shiya Muslims who made their way to South Asia (India), Central Asia and eventually to Japan. 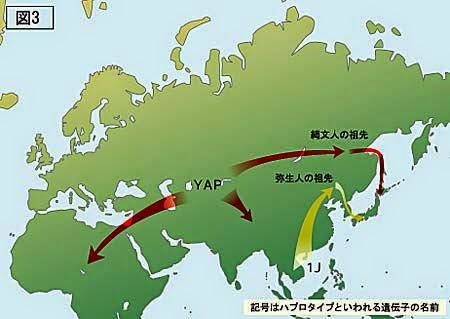 The FANTE, an AKAN language tribe is so similar in looks, culture,language intonation to the Luo. I once stopped a group of young men because I assumed they were speaking Luo. However,they are classified as West African, and not Nilotic. It is possible some groups are lumped together due to their proximity. If the Lemba are geneticaly Jews, then what is the meaning of the term AFRICAN? May be the SAN are the true AFRICANS. http://news.bbc.co.uk/1/hi/8550614.stm

Yes! Many linguistic connections and traditional practices common to the ancient Nilotic peoples are found among the Luo. And you, John, have been my most helpful Luo informant!

Genetic MtDNA data on Lemba women shows no descent from Jewish females. This is significant since Jewish identity is traced through the mothers.

That is why John asks if the San are the original Africans. This is important in thinking about Africa. The San are red. Today when most people think of Africa they think of black people. They miss the reality of Africa's great genetic diversity.

The Biblical writers recognized that the people among them with red skin were of an ancestral line of extreme antiquity.

Accidently landed on this blog when i was searching for the lineage of Mary (Mother of Jesus) and since then i can't stop reading. Very fascinating research indeed, and to my surprise it helps alot giving a new perspective in understanding Genesis.

I have question regarding this Ainu, in other article you posted about Abraham Annu Ancestors, yet in this article you mentioned about Okinawa to be linguistically related to Joktan the son of Abraham. I got abit confused since Joktan as you described earlier is the arabic tribe. So Abraham had Annu ancestors and he got a son who was to be arabic tribe, and then this arabic tribe is related to the Ainu that later dispersed to Japan? So this Ainu predate Joktan (as in Abraham had Annu ancestor) or the other way round? Or they are a mixed? Im sorry i really have no knowledge in this field but since it is so interesting i got all confused while reading :)

And other off topic I read you mentioned arabic is older than hebrew, while from what i know it is from different group of semitic languages. Hebrew and Aramaic are of the same group while Arabic is from another group which is younger than Aramaic by century. And Abraham you said as Horites also known as Hubiru (Hebrew) thus make it older than old arabic or? In relate to this article "Joktan" related linguistically with Okinawa, if Joktan is arabic tribe then their language should be arabic, while you put the Kata have similar or related form with Hebrew.

I read long time ago about diaspora, that Japanese Shinto have similar atributes with that of Judaism in religious ceremonies. Now it is about to make sense for me since they probably shared the same ancestors back to Abraham.

Thank you very much for your research and writings, all this time Bible especially Genesis is really confusing for me to understand, especially about creation and about the lineages, now I begin to understand it bit by bit from another perspective you have introduced to me trhough your writings.