Seligman is at the center of a long-standing controversy. Some consider him a racist. What do you think? 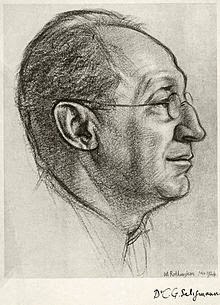 Charles Gabriel Seligman (1873-1940) was a British physician and ethnologist whose work influenced such renown anthropologists as Bronislaw Malinoski and Evans-Pritchard. He was a Fellow of the Royal Society, and he served as chair of Ethnology at the London School of Economics from 1913 to 1934.


Seligman did anthropological field research in Melanesia, Ceylon (Sri Lanka), and among the Nilotic Shilluk of the Sudan. He speculated that the "Hamites" were pastoral Europeans who came in waves into Africa and were better armed and smarter than the agricultural Negroes they encountered in Africa. (C. G. Seligman, The Races of Africa, London, 1930, p. 96)

Today the evidence of anthropology, archaeology and molecular genetics raises serious doubt about Seligman's portrayal of the Nilotic peoples as being Negroid until they intermarried with white Europeans. Instead a picture is emerging of a prehistoric Africa with peoples of all colors, and a wide range of facial and hair types.

Rather than Europeans moving into Africa, there has been a movement of peoples back and forth between Africa and the ancient Near East, Asia, the Pacific, the British Isles, and even eastern Canada. The Nilotic peoples were sea faring and dispersed widely much earlier than is generally recognized. The peoples of the Nile were likely the first to use sails to navigate. The fact that the Nile waters flow northward while the prevailing winds blow southward, necessitated tacking.

Seligman's theory stressed the racial unity of the black Hamites, and the term "Hamite" came into use as a reference to black people, and more generally as a reference to Africa. This perpetuated the misconception that all peoples of Africa are and always have been Negroid. Seligman certainly knew this not to be the case.

Seligman recognized the common descent of the Hamites and Semites, writing that "there is no doubt that the Hamites and Semites must be regarded as modifications of an original stock, and that their differentiation did not take place so very long ago, evidence for this statement being furnished by the persistence of common cultural traits and linguistic affinities."

Seligman did not recognize that the ruling lines of these peoples practiced endogamy, making it difficult to distinguish ethnic differences between the Hamites and Semites. Scientific analysis of the Genesis King Lists reveals that the lines of Ham and Shem intermarried, so that Abraham, Moses, David and Jesus are descendants of both great Nilotic chiefs.﻿ 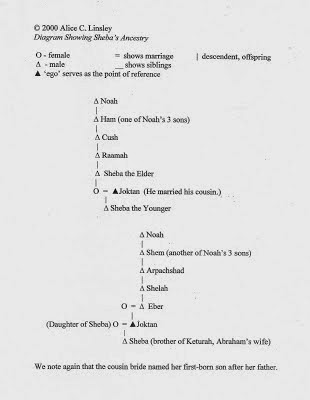 The marriage and ascendancy pattern of these Nilo-Saharan rulers drove expansion out of Africa into Arabia and Southern Europe.

The Hamite and Semite rulers had two wives. The first wife was a half-sister and the second wife was a patrilineal cousin or niece. The first born son of the half-sister wife ascended to the throne of his biological father. The first born son of the patrilineal cousin bride ascended to the throne of his maternal grandfather, after whom he was named. Other sons were given gifts of servants, jewelry, flocks, herds, warriors and craftsmen, and sent away to establish territories of their own. This marriage and ascendancy pattern as a driving factor in Kushite expansion should not be overlooked.

Seligman recognized cultural commonalities among the Hamites, and that many of these same cultural traits were found among the Semites. Culturally and linguistically they have a common heritage. The unity of the Nilotic peoples is reflected in the thematic parallels in their origin narratives. These same themes are found in the Genesis creation narratives.

Seligman thought that the Negro and Hamite admixture and cultural similarities were particularly evident within the ruling classes. However, we would expect to see a pattern of unity and diversity as rulers in the ancient world worked to unify the people of their territories. Ethnicity in the ancient world was tied to the ruler. Seligman also stressed distinction between two groups that he labeled Negro-Hamitic and Nilotes.

His research was not comprehensive. It did not include in-depth study of some of the key Nilotic peoples, such as the Oromo and the Luo. However, he was an influence on Dr. Paul Baxter who until his dead in 2014, was easily the world's leading scholar on the Oromo.

Racial categories have been rendered irrelevant by DNA studies. It has been noted, for example, that a set of twins can be born with physical features that would have been assigned to different races according to the old notion of race.

Today we more accurately speak in terms of haplogroups, clades and subclades, rather than races. Within a haplogroup there are a wide range of physical features.  For example, there were red and black Nubians. 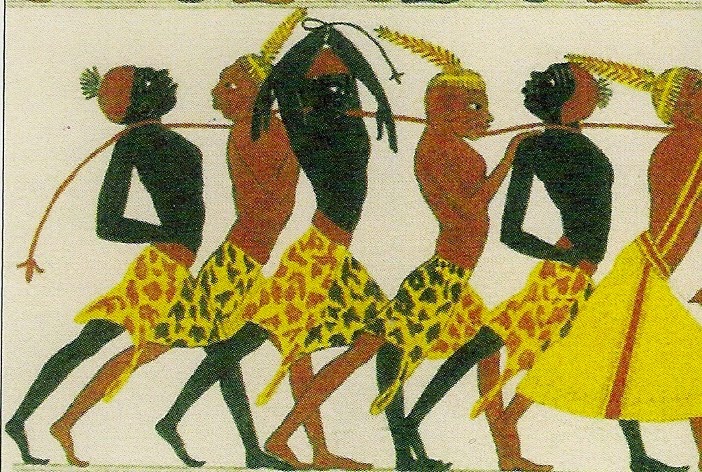 Were we able to test Abraham's DNA, we would likely find that he is in haplogroup R1b (Y-DNA) which has a wide range of physical features. The dispersion of the R1b group is shown on the map (below). Note the bright red around Lake Chad, Noah's homeland, and the Upper Nile Valley. The R1b is also prevalent in the British Isles where Kushan peoples settled and where Horite mining experts took up residence. The Horite Hebrew rulers are listed in Genesis 36.

The highest concentration of R1b in Africa is in the Lake Chad region, Noah's homeland.

The Genesis narrative suggests that Abraham had a distinctive red skin tone that is associated with other Edomites, like Esau. Analysis of the marriage and ascendancy pattern of the Edomites reveals that it is identical to that of Abraham's Nilotic ancestors. This is what would be expected if Abraham is a descendant of both Ham and Shem.

The Edomites may have been kin to the red Nubians. The Shasu of Nubia also lived in Edom. The red skin tone is a more dominant trait in HG R1b.

Among the people who were ethnically "Kushite" we have a wide range of physical features, some associated with Africa and others associated with Europe. Kushite culture is evident in the construction of pyramids and the mummification of rulers. These traits are found from Niger to Southern China.  The Nilotic Kushites are kin to the European Kushan. The European Kushan are also in HG R1b.

Seligman's assumption that the city building, iron-working peoples of the Nile were white is a big stretch. My African friends call this the theory of "white black men" and laugh. Just another case of a white man assuming that the more advanced technologies must be attributed to white people.

Race itself is a non-starter, anthropologically and genetically speaking. What people looked like has no bearing on their intelligence, their technological development, or their chosen way of life. If a white person lives a simple country life by choice, this is viewed by whites as "simplicity" but if black person chooses the same way of life, whites are likely to regard that person as lacking ambition.

I try to align my thinking about human origins and diversity of peoples to the best data available. However, that involves a judgment on my part. My judgment is often flawed. That is why I often apologize to the readers for mistakes.

Related reading: The Kushite-Kushan Connection; Solving the Ainu Mystery; The Nile-Japan Ainu Connection; A Kindling of Ancient Memory; Kushites in Mindanao; When is the Evidence Sufficient?; Kushite Burial Practices

I think the term "race" is inaccurate as well. We are all the human race.

In regards to endogamy, I've often heard that repeated incest cause a great deal of disfigurement, diseases and such, over a length of time. There was a tribe in Africa that solely married with their own clan, and near 90% of them had what was called "ostrich feet"... Very disfigured.

If Abraham's ancestors, and all the way down to the time of Jesus, practiced incest, should we expect more disfigurations? Or am I getting mixed up between incest and endogamy?

Most people seen to think the word Hebrew (ib-ree) originates from Abraham's ancestor Eber. In Genesis 10 it alludes to this when it says, "the father of the children of Eber". However it's difficult to tell if this is indicating ethnicity, religious status, or something else.

What are your thoughts?

Geneticist Dr Eamonn Sheridan, from the University of Leeds, says: "It is important to note that the vast majority of babies born to couples who are blood relatives are absolutely fine, and whilst consanguineous marriage increases the risk of birth defect from 3% to 6%, the absolute risk is still small."

This risk is hardly greater than the risk for birth defects among white women over 34. Here the risk of bearing a child with a defect increases from 2% to 4% for them.

Besides, the pattern to which we are referring applied only to the royal families who put a great deal of thought into the selection of brides. Also, these people understood basic principles of breeding. Consider the story of Jacob's animal husbandry by which he built up a healthy herd.