The Relationship of John the Baptist and Jesus Messiah 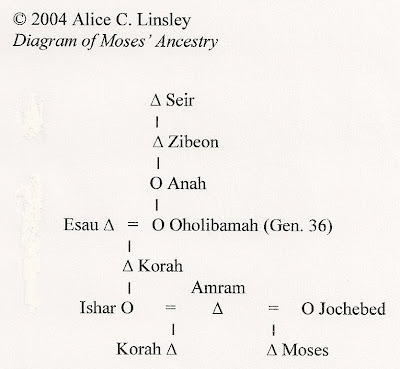 There have been many attempts to reconcile the genealogical information given in Matthew 1 and Luke 3. These lists are used by the writers for different narrative purposes. Nevertheless, once we understand the marriage and ascendancy pattern of the Horite Hebrews we can recognize the historical validity of the biblical claim that John and Jesus were blood relatives and both of the Horite Hebrew priestly lines.

A fruitful approach to investigating the relationship of Jesus and John is to look for the repetition of patterns such as two wives, three sons, the cousin-bride's naming prerogative, etc. The first step to understanding the marriage and ascendancy pattern of John and Jesus is to diagram the Biblical data, such as I have done in the diagram of Moses's ancestry.

John and Jesus come from the priestly lines that descend from Amram. One line is traced through Aaron, Moses's full-brother, and the other is traced through Korah, Moses' half-brother. According to Numbers 26, Korah's claim to be priest was supported by the Hanochites (descendants of Jacob's first born son, Reuben). Korah the younger is named by his mother Ishar after her father, according tot he cousin-bride's naming prerogative. Ishar is derived from the Hebrew isha, meaning "woman." Women are sometimes listed as "sons" in Genesis and Exodus if the ruling line is traced through them, which is the case with Ishar (Ex 6:17), and Anah and Oholibamah (Gen. 36). The last two women are Horites of Edom, of the house of "Seir the Horite."

The priestly lines of Aaron and Korah were ruler-priest clans before they became divisions. One division, the line of Matthew (Mattai/Mattan) resided in Bethlehem. Joseph of Ari-mathea was in the priestly line, something that qualified him to be a member of the Sanhedrin.

Following the kinship pattern of his ruler-priest forefathers, Amram had two wives. One was a half-sister, as was Sarah to Abraham, and the other was a patrilineal cousin, as was Keturah to Abraham. Ishar was Amram's cousin bride, and Jochebed was his half-sister.

According to Holy Tradition, John was a cousin of Jesus through his mother Elizabeth who was sister to Ana (Anah). Ana was Christ's maternal grandmother (as the Anah shown in the diagram was Korah's maternal grandmother). In the relationship of John and Jesus, we find intermarriage between lines of priests according to the ancient pattern of their ruler-priests forefathers. John’s mother Elizabeth was of the “daughters of Aaron,” meaning that she was the daughter of a priest. According to Holy Tradition, Mary was also a daughter of the priest, Joachim. According to the custom of the Horite Hebrew ruler-priests, she married into a priestly line when she married Joseph, grandson of Mattenai (Matthew 1:16).

John's father was a priest of the division of Abijah (Luke 1:5, 8). Abijah's was the eight division of priests which apparently resided in Bethlehem. Bethlehem was a Horite settlement according to I Chronicles 4:4 which names Hur (Horite) as the "father of Bethlehem" and Rahab's husband Salmon, the son of Hur is called the "father of Bethlehem" in 1 Chronicles 2:54. Nazareth was also a Horite Hebrew settlement.
The eighteenth division of ruler-priests, called ha·pi·TSETS (Happizzez), resided in Nazareth. In 1962 excavators discovered a small piece of a list of the twenty-four priestly divisions. This third to fourth-century marble fragment is inscribed with the names of the places where four of the divisions resided, including Nazareth, the residence of Happizzez. The name of the division is of Nilotic origin. Happizzez is related to the ancient Egyptian word for the life-sustaining Nile which was Happi.


John's mother, Elizabeth, married into the priestly line of Amram when she married Zechariah, a descendant of Abijah. Mary married into the line of Amram/Korah when she married Joseph, son of Asaph. I Chronicles 26:4-8 tells us that among "Korah's descendants there were Obed Edom's sons Shemaiah (the firstborn), Jehozabad (the second), Joah (the third), Sachar (the fourth), Nethanel (the fifth), Ammiel (the sixth), Issachar (the seventh), and Peullethai (the eighth). God had blessed Obed of Edom. His son Shemaiah had sons who ruled their families because they were soldiers. Shemaiah's sons were Othni, and Othni's skilled brothers Rephael, Obed, Elzabad, as well as Elihu and Semachiah. All of these people were Obed Edom's descendants. They, their sons, and their relatives were skilled and had the ability to perform the service. Obed Edom's family included 62 men."

"Obed-Edom" refers Korah's descendants who were rulers in Edom. These Horite Hebrew rulers are listed in Genesis 36. Seir the Horite ruled in the territory where Abraham lived between Hebron and Beersheba. Seir's granddaughter is Anah, the maternal grandmother of Korah the Elder, whose daughter Ishar married her patrilineal cousin Amram, the father of Moses, Aaron, Miriam and Korah.

There were twenty-four priestly divisions after the construction of the Second Temple. Nineteen of these divisions are listed in Nehemiah 12:10-22. In this list we find these names of particular interest: Eber, Joachim, Joseph, Abijah, and Mattenai. These are the names of priests who married the daughters of priests and from these lines came John the Baptist, Joseph, Mary and Jesus, the Incarnate Son of God.

John the Forerunner's testimony concerning Jesus as "the Lamb of God that takes away the sin of the world" (John 1:29) springs from direct knowledge of the tradition of his Horite Hebrew forebearers among whom Messianic expectation originated.

The idea that of 12 tribes is a late development, coming out of the Post-exilic period of Israel's history. The earlier organization was a 3-clan patrilineal confederation. This is evident when we explore the marriage and ascendancy pattern of the Horite Hebrew ruler-priest caste in the Bible. Here are the 3-clan confederations:

Kind of mind blowing. Reading your blog faithfully for many years now, I never realized, until now, that the whole time that I was buying in to the ideas that you are presenting, of the persistence of three-clan confederations as an ancient organizing principle for this people, that it was supplanting the idea of the 12-tribe identification that we commonly tend to think of the dominant paradigm at the time of Jesus. Still hard to accept. I guess I would say that, of the 10 confederations you are expositing in the list shown above, which seem to comprise a fair succession of confederations that would have been identity-determinative in describing the succession of the "ruler-priest caste" that we are following for purposes of Biblical Hebrew-to-Christian history, I might buy in without reservation to the idea of the first five or six, up to Yishmael-Yaqtan-Yitzak, but after that it breaks down for me. At some point doesn't the call to allegiance to the clan-identity principle get superseded by a call to allegiance to the tribe-identity principle? Maybe by the time of the Second Temple period, or at some point after, or gradually over the next century, doesn't the question of "which of the 3-clan confederations is my core identity?" get superseded by "which of the 12-tribes is my core identity?" as the fundamental social organizing principle for the Hebrews? So that, by the time of the betrothal of Joseph (Yoseph bar-Yaqub), of the House and Lineage of David, Tribe of Judah, to the Virgin Mary, of the Tribe of Levi, the Gospel writers are intent on expositing, and kind of celebrating, the Tribe identity of the Lord, while forgetting completely about which of three clans in a supposed three-clan confederation, He could be said to belong to?

Very perceptive! The shift takes place under the editorial hand of the Deuteronomist Historian which dates to 700-300 BC.The Deuteronomist is the final hand on the Genesis. This presence represents fundamentalism and iconoclasm and attempts to reshape Hebrew history. The book of Genesis contains information about Abraham and his ancestors who lived long before the Neo-Babylonian Period (about 700-300 BC), the period of the Deuteronomist Historian. The DH stresses rejection of images, exclusive devotion to Yahweh, and obedience to his prophet Moses (Deut. 18:18)