Blame Eve for the Heat 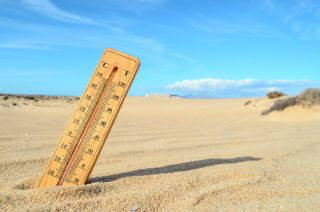 Recently, Ralph, a member of the international Facebook forum The Bible and Anthropology asked this question: "Who's sin caused the Fall, Eve's or Adam's?" Here are the responses:


Del - Adam's, I should think; as covenant head, he would have been fit to intercede sacerdotally for Eve had he himself not participated in the sin.

Alice - That is a good response to Ralph's question and accurate if we accept the biblical assertion that Adam is the first named ruler-priest of the ruler-priest lineages that descend to the Messiah, Jesus. The genealogical lists in Matthew and Luke are intended to show that connection. Also that point is made in Paul's parallelism of Adam and Jesus. "For since death came through a man, the resurrection of the dead comes also through a man. For as in Adam all die, so in Christ all will be made alive." The priestly office is clearly identified with men.

Kristine - In Romans, Paul refers to “one man” (who sinned) like 13 times but never to one woman, even though she ate first.

Alice - St. Cyril of Alexandria teaches that humanity became “diseased… through the sin of one," and if we attend to the Genesis text closely, that is the sin of Eve, the crown of creation (think pyramid), whose action of submitting to the will of a creature who slithers along the ground (bottom of pyramid) inverted the hierarchical order in creation, so that all of the creation is subjected to decay. Therefore, as by that first woman and first man death entered, so by the New Eve (the Theotokos) and the New Adam (Jesus Messiah), death is overcome. "Christ is risen from the dead, trampling down death by death, and on those in the tombs bestowing life!"

The Eastern Church never speaks of sin being passed from Adam and Eve to their descendants. Instead, each person bears the guilt and shame of his or her own sin. What then is the inheritance of humanity from Adam and Eve if it is not guilt? It is a condition or a disease that results in death, which St. Paul also points to in I Corinthians 15:21 where he parallels Adam and Christ. "For since death came through a man, the resurrection of the dead comes also through a man. For as in Adam all die, so in Christ all will be made alive."

Del - I think the difference between the East and the West in this case has to do with the East thinking the Western theologians are using the word "guilt" in penal/juridical sense. While, in fairness, some theologians certainly *do* use the term in that way, that doesn't seem to be the traditional doctrine, which uses the term "debitum" as shorthand for the disorder a man experiences who lacks the justice that comes along with the grace of divine sonship. Since a person is made for interpersonal communion with other persons (and, preeminently, interpersonal communion with God), if he lacks the grace of divine sonship, he can't fully be himself. He is spiritually disfigured, and this creates a disorder in the union of the soul with the body, which in turn negatively impacts both. We can speak of this in terms of "guilt", because it is something corrected by justice (i.e., by "arightness"). It isn't really the same thing as personal guilt, though, nor do I think the Western fathers or later medievals mean to imply an identity between the two.

Alice - True, Del. Another difference is that the Eastern Fathers were sensitive to archetypes and were great observers of patterns in Scripture. One of those patterns is male-female couplets. Note, for example, that after Eve's sin, the cool encounters with God become hot encounters. Gen 3:8 speaks of the Lord God walking in the garden in the cool of the day. In Gen. 3:15, God tells the Woman that she will bring forth the Seed that will crush the serpent's head. Note the promise of the Son. The next visitation is to Abraham in heat of the day: "The LORD appeared to Abraham near the great trees of Mamre while he was sitting at the entrance to his tent in the heat of the day." (Gen. 18:1) Again a son is promised. The male-female couplets in Genesis usually point us to Messianic expectation.


Related reading: St. John Chrysostom on Eve's Sin; Adam Was a Red Man; Binary Sets in the Ancient World; The Sun and the Moon as Male-Female Couplet; Rebecca Ran to Her Mother's House; Binary is a Bad Word These Days