"Binary" is a Bad Word These Days 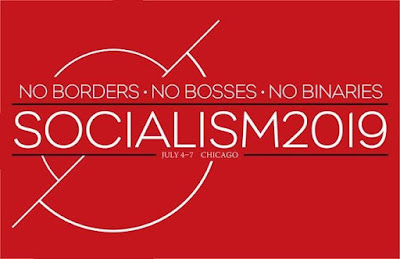 Recently, I read about a catchy slogan that has gained popularity among left-leaning segments of American society. The slogan is “No borders, no bosses, no binaries." This was one of the slogans used to advertise the 2019 Socialism Conference.

Clearly, a world without borders, bosses, and binaries would be the realm of chaos. This is what the Bible warns against. Proverbs 22: 28 says, "Don't move a boundary marker set up by your ancestors." Native American wisdom speaks of the Creator assigning lands to the various peoples. Leftists are quick to point out the tragic treatment of Native American populations by Europeans, yet they would rob them of the lands that they rightfully control through their tribal councils. Removing borders and boundaries does not make people free.

The slogan drives at a new world order where the existing authorities are replaced by ideologues, and as history has shown, ideologues hold their principles above human lives. Far more people were murdered in the Twentieth Century by socialists than by the Nazis. In Russia alone, the number killed under Stalin's regime is incalculable, easily as many as twenty million.

The slogan expresses lawlessness or anarchy in order to achieve a new order. Socialists are willing to sacrifice lives, property, and social stability to achieve a pipe dream. Chaos only brings chaos. The spiral is not upwards toward a better social order. It is always downwards toward more chaos until a leader emerges who will strong arm the people into submission. That leader comes to power through bloody struggle, not through an orderly process of elections. In Marxian thought this is a positive development and one which is necessarily repeated over and over. We have only to look at the final decades of ancient Rome to imagine the horrid life this cycle produces for the average citizen.

Socialism operates on the level of theory and Utopian idealism. It is not rooted in empirical observations. It is made of dreams, ambitions, and non-reality. In stark contrast is the biblical worldview with its emphasis on the Law.

In the Bible the Law hinges on the empirical observation of binary sets and distinctions which are recognized in patterns in nature. The distinctions present certain hierarchies. For example, in the binary set male-female, males are recognized as being larger and stronger than females. Homosex was forbidden because it defies the male-female binary order in creation. The defiance has no limits. It gives way to theories of a gender continuum and gender transitions.

In the binary set Sun-Moon, the sun is recognized as the greater light (Genesis 1). The light of the Moon is refulgent. The Moon reflects the glory of the Sun. Another hierarchy.

Another binary distinction is between humans and plants. Onanism was forbidden because the seed that should fall to the earth is the seed of plants, which spring forth from the earth. The seed of man should fall on his own type (the womb), from which man comes forth.

There is a binary distinction between humans and non-human animals. Bestiality was forbidden as it blurs the distinction between humans and animals. Likewise, the distinction between life and death was not to be blurred by boiling the baby goat in its mother's milk (forbidden three places: Ex. 23:19; Ex. 34:26, Deut. 14:21). The baby's life is to be nurtured by the mother's milk.
The binary worldview of the Bible makes it clear that God's order in creation has both hierarchies and boundaries. Both have been rejected throughout history by people who defy the divinely established order. Homosex is merely one of numerous transgressions of boundaries. Transgression of boundaries provides a sense of freedom from restrictions. However, it can also cause disorientation.

The wisdom of the Law becomes clearer to us when we understand the binary logic upon which it rests. This wisdom has a basis in empirical observation and reality. It points us to a realm of peace under a Good God. Some seek to replace it with a lesser wisdom and a god of their own invention.

Related reading: The Binary Worldview of the Bible; Blood and Binary Distinctions; The Sun and Moon as a Binary Set; Public Debate and Search Engine Politics; Trapped in a Web of Punditry