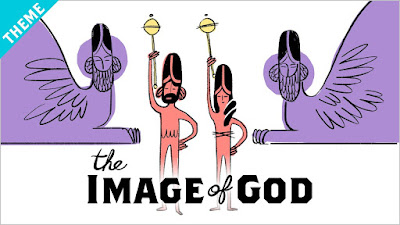 Then God said, "Let us make man in our image, in our likeness, and let them rule over the fish of the sea and the birds of the air, over the livestock, over all the earth, and over all the creatures that move along the ground." (Genesis 1:26)


What follows is the abstract for IMAGING GOD: A theological Answer to the Anthropological Question? by Alistair McFadyen (University of Leeds). The full text may be read here.


McFadyen's article makes sense of the theological context of this Biblical figure of speech - "the image of God" and he rightly asserts that the theological and the anthropological meanings are inextricably entwined. He uses the term "anthropological" in a theological sense, i.e., as related the biblical view of human nature, and this helps his argument. On the other hand, he fails to explore the trope as an anthropologist would and that weakens his case.

The weakness comes from failure to see that the structure of Psalm 8:4 is parallel to the structure of Genesis 4-5. Adam and Enoch are paralleled, as are their descendants whose lines intermarried. In this diagram of Cain's line (Genesis 4) and Seth's line (Genesis 5) are shown parallel. They represent two ruling houses that intermarried. Naamah, the daughter of Lamech the Elder, married her patrilineal cousin Methuselah. She named her first-born son Lamech, after her father. This is one of many examples of the cousin bride's naming prerogative found in the Bible.

Analysis of the diagram enables us to see that Enoch and Adam are rulers whose descendants practiced endogamy, that is, their royal lines intermarried. Endogamy is a universal trait of castes. Their descendants represent the oldest known ruler-priest lines, and it is from them that the Son of God came in the person of Jesus Messiah.

On a fundamental level "imaging" God is what the deified ruler is to do. To miss this is to lose sight of the connection between dominion and the divine image. There is a Messianic dimension as the One who has ultimate dominion is the Son of God. Jesus Messiah is the icon of God the Father and this icon is not a static picture, but a living image.


"Because God’s relating – and therefore God – are already oriented towards the human; indeed, oriented and seeking the human in its fullest realization. Psalm 8 has a shorthand code whereby it rolls up the whole history and future directedness of God’s relating in its orientation towards human well-being, flourishing and consummation: God’s mindfulness (v.4). And it is in the context of wondering acknowledgment of the status that affords human beings that it articulates the anthropological question in a specifically and definite theological register."


Adam was made in the image of God and this expresses a God-Man relationship, but beyond that we must consider the claim of Abraham's ancestors that they are the royal descendants of Adam. In other words, they claim a historical link to the divine image through their Horite Hebrew ancestors and this constitutes their work as ruler-priests who are to image God.

Psalm 8:4 is reveals an important theological and anthropological understanding of the God-Man relationship. Adam parallels Enoch/Nok, the father-in-law of Cain and Seth . In this sense, Genesis poses two founding fathers: Adam and Enoch/Nok/Anochie. They are founders of the ruler-priest lines described in the Genesis 4, 5, 11, 25 and 36. These are not genealogies. They are King Lists.

Note that Enoch and Adam are paralleled in Psalm 8:4:


What is man (Enoch/ha-noch) that you are mindful of him,
or the son of man (ben adam) that you care for him?

Psalm 8:4 connects the Adam and Enoch and highlights their historicity and meta-historical significance. The historical ruler Enoch parallels the "son of man", Jesus' favorite description of Himself. There is a sacred mystery here concerning Christ that places Him at the nexus of the meta-historical and the historical. Both Adam and Enoch point to the fully human Son of God, the very "image of God" shown to us perfectly and fully in the person of Jesus Messiah.

The Psalmist parallels two deified rulers: Adam and Enoch. He regards both as "fathers" of the Hebrew people whose roots are in Eden. Perhaps this is why Jesus' ruler-priest identity was recognized in Tyre in Mark’s Gospel, not on a mountain, as in Matthew's account of the Transfiguration. For Mark, the Messiah’s appearing means the beginning of the restoration of Paradise. Mark likely had in mind this passage from Ezekiel 28:

"Son of Man, raise a lament over the king of Tyre and say to him: Thus says the Lord God: You were the seal of perfection, full of wisdom and flawless beauty. You were in Eden, in the Garden of God; every precious stone was your adornment... and gold beautifully wrought for you, mined for you, prepared the day you were created."

Likewise Amos 1:5 speaks of “him who holds the scepter from the house of Eden."

Genesis connects "image of God" with dominion over all the earth. Consider this from Genesis 1:26:


Then God said, "Let us make man in our image, in our likeness, and let them rule over the fish of the sea and the birds of the air, over the livestock, over all the earth, and over all the creatures that move along the ground."

In the beginning, Adam did not have to work for his dominion. God bestowed to him a territory to rule over. The suggestion that Man is to enjoy status as a deified or righteous ruler who "images" the Ruler of the universe is quite evident. This is a bestowed ontology.

The Fall did not remove the image and likeness of God, nor did it remove the responsibility to "image" God. Adam's descendants spread abroad and they ruled over territories from Africa to India and beyond. As they dispersed, they took their expectation that a Son who would be born of their ruler-priest lines. He is called the "Seed" of God in Genesis 3:15. Of this Seed, Paul writes in Galatians 3:


"Now to Abraham and his Seed were the promises made. He saith not, and to seeds, as of many; but as of one, and to thy Seed, which is Christ… And if ye be Christ’s, then are ye Abraham’s seed, and heirs according to the promise."

Jesus referred to Himself as the promised "Seed" when He foretold his death in Jerusalem. He told his disciples "Unless a seed fall into the ground and die, it cannot give life." (John 12:24)

The phrase "image and likeness" suggests a royal seal which holds the image or likeness of the king. There is a sense of divine appointment. Adam, Enoch, Cain, Seth and all appointed rulers after him are to "image" on earth the righteous rule of God. Yet all failed, save Jesus Christ beneath whose feet God will subject all things.

McFayden writes, "Engaging with Psalm 8 suggests that, biblically, asking the anthropological question (what is humanity?) is tied to the answer to the theological question: who is God?

Psalm 8:4 does indeed speak of who God is. However, it does so using parallelism of historical persons and it places the Son of God as the culminating figure of the biblical narrative and the Messianic Faith.

Related reading: The Substance of Abraham's Faith; Cain as Ruler; Enoch: Angelic Being or Deified Ruler?; Horite Hebrew Deified Sons; The Horite Ancestry of Jesus Christ: The Ra-Horus-Hathor Narrative; Adam Was a Red Man; Righteous Rulers and the Resurrection