Enoch: Angelic Being or Deified Ruler?


There is much interest and speculation concerning "the Watchers" mentioned in the books of Enoch and Daniel. Are these angels or are these robed elders (deified rulers/"sons" of God) who appear in Revelation 19?


"And behold! He cometh with ten thousands of His holy ones to execute judgment upon all, and to destroy all the ungodly: and to convict all flesh of all the works of their ungodliness which they have ungodly committed, and of all the hard things which ungodly sinners have spoken against Him." (1 En 60:8). Compare to Deuteronomy 33:2, also a source later than Genesis.

In the Book of Daniel the Aramaic term that denotes angels is "watchers" (`îrîn). Each is called "watcher and holy one" (`îr weqadîsh). The term "watcher" implies that angels act as God's sentinels, watching and guarding, as in the case of the angels appointed to guard the entrance to Eden.

Watchers appear in literature that post-dates the earliest material in Genesis. They are mentioned in Vedic (Sanskrit) texts that speak of gods begetting children with humans. They appear in the Gilgamesh Epic, in the Lamech scrolls, and in the Book of Enoch which states that 200 "Watchers" descended to earth in the time of Jared, son of Mahalalel, and instructed men in the arts and sciences.

The term "watchers" appears in the book of Daniel which has a Babylonian context with its emphasis on the sacred number seven. This tradition is later than the material found in the parts of Genesis that emphasize the binary feature: male-female (Gen. 2), "two of every sort" (Gen. 6).

Is Enoch, who did not taste death, a deified elder or an angel? If it can be proven that the deified elders and angels alike were understood to be watching the activities of humans, the confusion can be resolved very nicely. A deified ruler is regarded as an angelic being.

Analysis of the kinship pattern of the Genesis king lists points to an older, less mystical, tradition that places Adam and Enoch in the same generation as founding "fathers" of the ruler-priest lines (Habiru/Hebrew). This is evident in Psalm 8:4 which parallels Enoch and Adam:

The question is which Enoch? Because this Enoch is poses as a contemporary of Adam, it is likely that this Enoch is the unmentioned father-in-law of Cain and Seth who married their cousins. As has been confirmed through analysis of the kinship pattern of the Genesis kings, the cousin bride named her first born son after her father. This is shown in the diagram below. 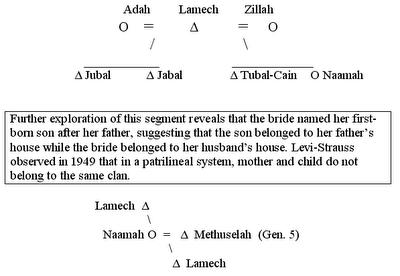 Note that Lamech's daughter Naamah married her patrilineal cousin Methuselah and named their first born son Lamech, after her father. This is called the "cousin bride's naming prerogative." This feature identifies the ruler-priests lines of the Bible, making it possible to trace the ancestry of Abraham, Moses, Samuel, David and Jesus back to these earliest Biblical rulers. The number seven is associated with the priesthood in the Babylonian tradition. Enoch as the "heavenly priest" is the topic of this paper by Andrei A. Orlov, Enoch as the Heavenly Priest.

Cain is portrayed in Scripture as the archetypal earthly ruler. He married into a royal house, a family to which he was related. Adam is the representative of the whole of created humanity in the analogical framework of the Apostle Paul, but Enoch is the representative of the oldest known line of king-priests in the Bible. That is the likely explanation for the Psalm 8:4 parallelism: What is enoch that you spare a thought for him, or ben' adam that you care for him? 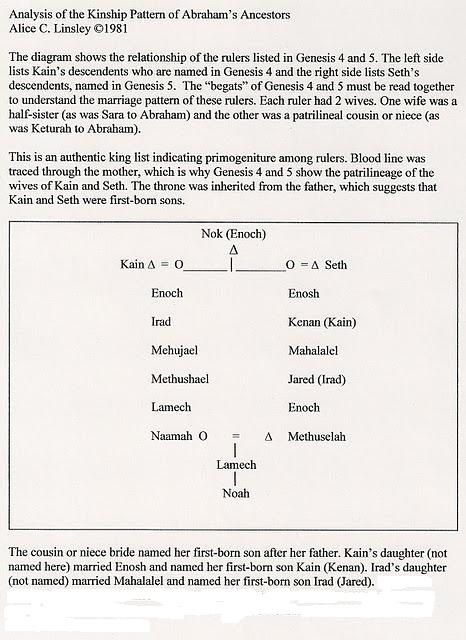 Analysis of the marriage and ascendancy pattern of the Genesis rulers indicates that Cain and Seth married the daughters of a ruler named Enoch/Enosh. These wives named their first born sons after their father. Kain's first born son and heir is Enoch (Gen. 4:17). Seth's first born son and heir is named Enos or Enosh (Gen. 5:6), the linguistic equivalent of Enoch. This places the hidden or unmentioned Enoch as the patriarch of the ruler-priest lines of Cain and Seth. These lines intermarried (endogamy). If we read Adam as the father of the red R1b peoples, not as the first human created, the hidden Enoch would be Adam's contemporary (in the same generation).

There are questions to consider when approaching the figure of Enoch. As there are 3 men with that title, which Enoch is the focus of the Babylonian myth?  If we recognize that the name of Seth's successor Enos or Enosh is the linguistic equivalent of Enoch, there are 3 who hold this title: The sons of Cain and Seth and the son of Jared (Irad). The Enoch under consideration is Enoch, the seventh from Adam, who was taken (translated) to heaven according to Genesis 5:24. His name, which comes from anochi, has a double meaning. It means one who ascends to the throne and the one who is heir. Enoch ascended to the throne of his father Lamech who lived 777 years, and he ascended to heaven where he offers prayers with incense. He represents the righteous elders who constitute the heavenly council.

There are problems also with the mystical symbolism surrounding Enoch. Emphasis is placed on the number seven in association with Enoch. However, it is Lamech to whom the most sacred number is applied: 777.  Genesis 5 presents this information:

The different numbers pertaining to Lamech the Younger are (Septuagint) 753, (Samaritan) 653, and (Masoretic) 777. No other man in the Genesis king lists has such a discrepancy in the total number of years. Again, Lamech, not Enoch, is the lightening rod who draws our attention and provokes questions. Blessed saint John of the Golden Tongue noticed this.

Lamech is a variant of the Akkadian and Egyptian word la-melech, meaning "priest of the King."The word la-melech has been found inscribed on hundreds of seals. La-melech seals typically had the image of a scarab (dung beetle) or a sun disc. Both were emblems of the Creator. The sun disc and scarab were used as a royal seal by the Kings of Judah. Hezekiah's seal is an example.

Lamech the Younger and a message of hope


Lamech the Younger, the father of Noah, is assigned 777 years in Genesis 531: "And all the days of Lamech were seven hundred seventy seven years." Here we have a message of hope.

The number 7 represents new life, mercy and renewal. Cain murdered and tried to hide his crime from God. Cain deserved death, yet God showed him mercy by sparing his life. Cain was exiled from his people and God showed him grace by placing a mark on him as a protecting sign. Reflecting on this great mercy shown to his ancestor, Lamech challenges God to show him greater mercy. If grace was shown to Cain (7), then Lamech, the Elder, by confessing his sin, claims a double measure of grace (77). He claims that God avenges him "seventy and sevenfold" (Gen. 4:24). Lamech, the Younger is assigned a triple measure of grace because he is said to have lived 777 years.

John Chrysostom commented on the unfathomable grace expressed through the story of the Elder Lamech. Here is what he said: “By confessing his sins to his wives, Lamech brings to light what Cain tried to hide from God and by comparing what he has done to the crimes committed by Cain he limited the punishment coming to Him.” (St. John Chrysostom’s Homilies on Genesis, Vol. 74, p.39. The Catholic University Press of America, 1999.)


Related reading: God's Mercy and Cain's Demise; The Life Spans of Methuselah and Lamech; Who Were the Watchers?; The Mighty Men of Old; The Seventh Seal and Silence in Heaven; Does the Binary Feature Signal Greater Complexity?; Number Symbolism and the Bible; The Pattern of Two Wives; Adam Was a Red Man; INDEX of Topics at Just Genesis

A lot of people (most?) think what is going around as the Book of Enoch is a forgery.

Do you not think so?