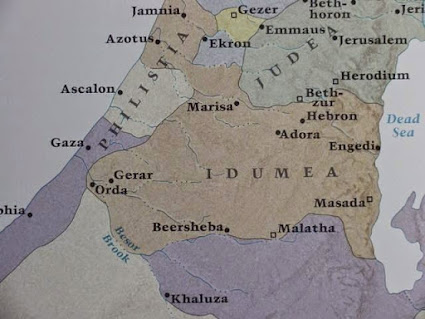 Abraham's territory was in Edom between Hebron and Beersheba (north-south axis)
and between Engedi and Gerar (east-west axis).
Aaron was buried in Edom.

Abraham is the central figure of the book of Genesis, and a pivotal figure throughout the Bible. He is presented as a man of faith who acted on his faith and was justified by faith.


Was not Abraham our father justified by works, when he had offered Isaac his son upon the altar? Seest thou how faith wrought with his works, and by works was faith made perfect? And the scripture was fulfilled which saith, Abraham believed God, and it was imputed unto him for righteousness: and he was called the Friend of God. Ye see then how that by works a man is justified, and not by faith only. (James 2:21-24)

A case can be made that Abraham's Messianic Faith lives in Christianity.  This is more evident when the specific points of the Horite beliefs are considered. What was the substance of Abraham's faith?

That question can be answered by investigating Abraham's cultural and religious context using Genesis and extra-biblical sources of information such as linguistics, kinship analysis, archaeology, anthropology, and DNA studies. When we bring the evidence of these disciplines together, we draw the following conclusions:

Abraham's people originated in the Upper Nile region which includes western Sudan, southern Ethiopia and northern Somalia. This is the region of ancient Eden (eden is related to the Nilo-Saharan word egan, meaning garden and to the Akkadian word edinu, meaning fertile plain). It was here that the first Bible promise was made to Abraham's ancestors. The Edenic Promise of Genesis 3:15 foretells how the Woman would bring forth a son who would crush the serpent's head and restore paradise.

This Horite Hebrew expectation was expressed about 1000 years before Psalm 91 in the Pyramid Texts. "Horus has shattered (tbb, crushed) the mouth of the serpent with the sole of his foot (tbw)" (Utterance 388)

As the sun was the symbol of the Creator and his Son, divine appointment was expressed by overshadowing. When the Virgin Mary asked how she was to become the mother of the Messiah, The angel answered, "The Holy Spirit will come on you, and the power of the Most High will overshadow you. So the holy one to be born will be called the Son of God." (Luke 1:35)

The region of Eden is where we find the oldest agricultural practices, metal-working, circumcision of priests, and the oldest Hebrew (Habiru/Abru/'Apiru) temples and shrines. 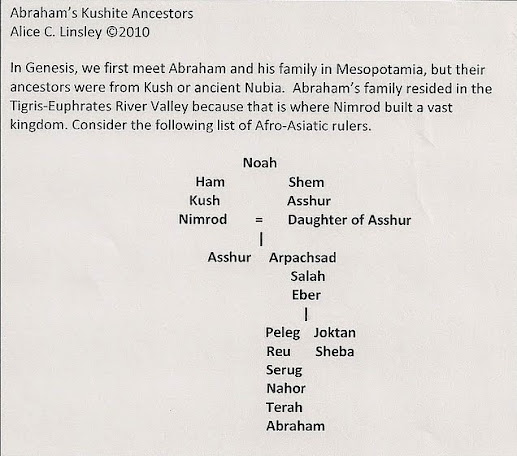 The Genesis king lists indicate that Abraham's ancestors migrated from ancient Kush to Mesopotamia. Abraham is a descendant of Nimrod, the son of Kush (Gen. 10:8), who built a vast kingdom in the Tigris-Euphrates River Valley. This Kushite migration has been confirmed by DNA studies. Nimrod's brother was Ramaah who settled to the southeast of Dedan in northern Arabia.

The term "Horite" pertains to Horus, who the Horite Hebrew regarded as the "son" of God. This God Father-God Son relationship is central to the Messianic Faith of Abraham and his Horite Hebrew ruler-priest caste.

The oldest known site of Horite Hebrew worship is at Hierakonpolis (Nekhen) on the Nile (c. 4000 BC). Other Horite shrines (mounds) are mentioned in the Pyramid Texts. The Horite Hebrew and the Sethite Hebrew served the same God and the same king. However, they maintained separate shrines. Their relationship is that of a moiety. The term "moiety" refers to one people organized into two ritual groups.

The Horite Hebrew were dedicated to the Creator God and his Uniquely Begotten Son by a Chosen Woman (Gen. 3:15), and the Generative Word. A Horite song found at the royal complex at Ugarit, speaks of HR (Horus) who descends to the place of the dead "to announce good tidings." Horus is also described as rising on the third day (The Ancient Egyptian Pyramid Texts, Utterance 667).

Among the Nilotic Hebrew God Father was called Ra and the Son was called Horus, from which the words "Horites" and "Horim" are derived. Among the Horites of Mesopotamia God father was called Ani and the son was called Enki, meaning Lord over all. The breath of God was perceived as a wind that refreshed or destroyed and was called Enlil. That sounds very much like the Holy Trinity!

Under Judaism, beginning around 600 BC, the Trinitarian understanding of the Godhead was rejected. This necessitated the redaction of sacred texts of the Horite Hebrew who believed in God Father and God Son. This explains the contextual incongruities found in Genesis today.

Abraham's people believed in a supreme creator God with lesser assisting semi-divine powers in a hierarchical ranking, like a pyramid. This is called henotheism. Each clan was headed by a hereditary ritual leader and had guardians from among the lesser powers (along the idea of guardian angels). In ancient Egypt these powers were represented by animal totems. Only one power was represented as a man - Horus - God's uniquely begotten son. The biblical priesthood and the Messianic Faith originate among the devotees of Horus. The priesthood of the Horite and Sethite Hebrew was restricted to males and was concerned with ritual purity, especially the avoidance of blood guilt.

The Horite Hebrew anticipated a Righteous Ruler to be born of their caste. His identity would be confirmed by his third day resurrection. The Horite Hebrew expectation that the Righteous Son would not remain in the grave is expressed in Psalm 16:10: "For thou wilt not leave my soul in hell; neither wilt thou suffer thine Holy One to see corruption."

The New Testament speaks about Jesus as the ruler-priest. He is the firstborn from the grave and by his resurrection He delivers to the Father a "peculiar people." He leads us in the ascent to the Father where we receive heavenly recognition because we belong to Him.

Heavenly recognition for the Horites was never an individual prospect. Heavenly recognition came to the people through the righteousness of their ruler-priest. Horite Hebrew rulers took this seriously, some more than others. The best rulers were heavenly minded and the worst were so earthly minded that they shed much blood enlarging their territories. All failed to be the Ruler-Priest who rose from the dead. Therefore, none have the power to deliver captives from the grave and to lead them to the throne of heaven (Ps. 68:18; Ps. 7:7; Eph. 4:8). That one true ruler-priest is Jesus, the Son of God.

Genesis presents two founding lineages for Abraham's people. One is traced from the historical Adam, the father of Cain and Seth. Adam. Cain and Seth married the daughters of a chief named Enoch. The name Enoch. Those brides named their first-born sons after their father. This is the earliest example in the Bible of the cousin bride's naming prerogative.

Genesis poses both Adam and Enoch as the ancestors of the rulers listed in Genesis 4, 5 and 11. This may explain why the names Adam and Enoch are parallel in Psalm 8, verse 4:

Jesus is associated with two Horite Hebrew settlements: Bethlehem and Nazareth. In these ancestral settlements there resided very ancient priestly divisions. Nazareth was the home of the eighteenth priestly division, ha·pi·TSETS (Happizzez). Bethlehem is designated as a settlement of Hur in I Chronicles 4:4 which names Hur (HR) as the "father of Bethlehem." Rahab of Jericho was the wife of Salmon, the son of Hur (a Horite Hebrew). Salmon is called the "father of Bethlehem" in 1 Chronicles 2:54. Rahab was the grandmother of Boaz who married Ruth. Salmon is a Horite name associated with Bethlehem in 1 Chronicles 2:51.

Analysis of the king lists of Genesis 4, 5, 10, 11, 25 and 36 reveals a distinctive marriage and ascendancy pattern that is unique to the Horite Hebrew ruler-priest caste. The pattern involves two wives, as with Lamech (Genesis 4); Terah, Abraham, Esau, Jacob, Amram, Moses, Elkanah, Ashur, and Joash.

The wife of the ruler-priest's youth was his half-sister. Before ascending to rule over his clan, there is a second marriage to a patrilineal cousin. The first-born son of the first wife is the proper heir of his father. The first-born son of the cousin wife served as a vizier in the territory of his maternal grandfather, after whom he was named. This is called the "cousin-wife's naming prerogative." This hints at a pattern that will be fulfilled when Jesus Messiah takes His second wife, the Church.

The origins of the faith of Messiah (Christ), the Son of God, came to Abraham, not as special revelation, but as a tradition received from his forefathers. The distinctive traits of this tradition align remarkable well with the key features of catholic (universal) faith and practice, suggesting that Christianity is a true expression of the Messianic Faith:


Because of God's promise in Eden, Abraham and his ancestors lived in expectation of the Son of God and taught their children to do so. Their priestly lines intermarried exclusively (endogamy) in expectation that the Seed of the Woman would come of their priestly lines. The Edenic Promise was a central belief of the Horite Hebrew tradition. They believed that the son would be born of the Woman of Genesis 3:15. She would conceive by being "overshadowed" just as was announced to Mary by the angel (Luke 1:35).

The Virgin Birth is one of many signs that the One born to Mary is the Son of God. This is not about the birth of the Sun at the winter solstice. This is not a reworking of the Egyptian tale of Horus. The Horus archetype provides the pattern whereby Abraham's descendants would recognize Messiah. It points us to the Virgin who gave birth to the Son of God under humble circumstances. In the Horus myth, Hathor gives birth in a cave. In Orthodoxy, icons of the Nativity show the Theotokos with the newly born Christ in a cave.