The Cross on a wall at the Temple of Horus at Edfu.

There is a surprising consistency between the Horite Hebrew religion and Christianity. The earliest Christians were Jews who continued their worship practices. However, Judaism, did not preserve the faith of Abraham.

Certainly, early Christian worship was patterned on the synagogue, with scripture readings, prayers, homilies, and days of feasting and fasting. The east-facing altar is patterned on the worship places of the Hebrew, as are church furnishings such as the tabernacle and the lamp. However, Christianity alone affirms that Messiah is the Son of God.

The Apostle Paul wrote a great deal about the Messianic Faith and how it is expressed in the promises made to Abraham the Hebrew. Paul stresses that those who follow Jesus Messiah have been made partakers of those ancient promises (Galatians 3:7-9). He exposes as a false teaching the Judaizers' insistence that the Messianic Faith requires adherence to the laws of Judaism.

Paul makes it clear that the true believer is connected to Abraham the Hebrew, not to Judaism. He identifies Abraham’s Seed as Jesus Messiah. In Galatians 3:29, Paul explains, “If you belong to Christ, then you are Abraham’s descendants, and heirs according to the promise” made to Abraham.

In a sense, the earliest followers of Jesus re-discovered the faith of Abraham. They came to believe that Jesus is the Son of God whose sacrifice on the mountain was prefigured in the sacrifice of the Ram on Mount Moriah. James 2 explains, "Was not Abraham our father justified by works, when he had offered Isaac his son upon the altar?" This is what Father Abraham discovered. 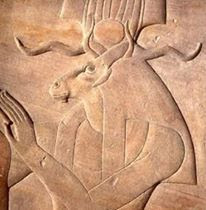 Horus as the appointed ram to be sacrificed.


For Abraham the Horite Hebrew, the ram was associated with the west, the setting sun, and the future. The son of God rode with the Father on the solar boat. The boat of the morning hours was called Mandjet and the boat of the evening hours was called Mesektet. While Horus was on the Mesektet, he was in his ram-headed form.
The ram provided by God spoke of  God's acceptance of Abraham's intent to offer Isaac. The lamb that Issac had anticipated and which Abraham said God would provide became the ram. Horus was the Lamb in his weaker state and he was the Ram in his glorified sacrificed strength.

John expresses the good news of Messiah this way:

God declares that Jesus is his Son. All who believe this know in their hearts that it is true. If anyone doesn’t believe this, he is actually calling God a liar because he doesn’t believe what God has said about his Son. And what is it that God has said? That he has given us eternal life and that this life is in his Son. So whoever has God’s Son has life; whoever does not have his Son, does not have life. (1 John 9b-12)

Among the Horite Hebrew the sun was the symbol of the High God. The ancient solar symbolism is very much a part of Christianity. The oldest churches in both the East and the West have the altar at the east end (ad orientem) and the priest celebrates facing the rising sun with his back to the congregation.

Timothy I, Patriarch of the Church of the East from 780 to 823, explains, "He [Christ] has taught us all the economy of the Christian religion: baptism, laws, ordinances, prayers, worship in the direction of the east, and the sacrifice that we offer. All these things He practiced in His person and taught us to practice ourselves."

In many of the great cathedrals the window above the high altar depicts the sun. Here is an example from the Duomo in Milan, Italy. 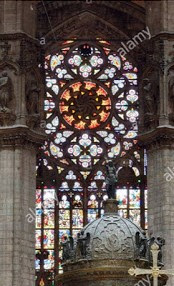 Another example is found at a church in Lugano, Switzerland. This image was adopted by the Jesuits and is found wherever they established centers of learning. 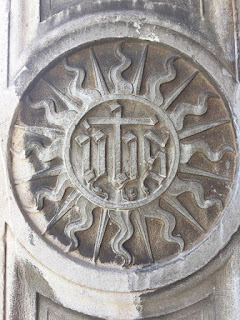 The Messianic Faith of Abraham has spread to so many populations that it is difficult to identify a single people group with his faith. Judaism rejects the idea that God has a son, so Judaism does not represent the faith of Abraham the Hebrew. (The English word "Hebrew" is derived from the Akkadian word "abru" - priestly official. The caste of Hebrew priests was called "abrutu" - collegium of abru-priests. See The Assyrian Dictionary of the oriental institute of the university of Chicago,1964, page 64. 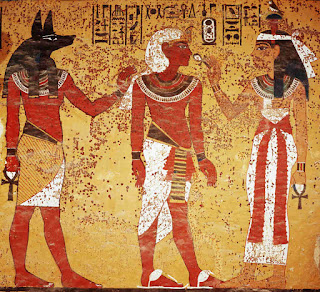 The ankh appears on ancient images related to the hope of the resurrection. It is held, often by Hathor (mother of Horus), to the mouth of the deceased in the mouth opening ritual. The image above was found in the tomb of King Tutankhamun. In the Nicene Creed, the Spirit of God ("Akh" in ancient Egyptian) is called "the Lord, the giver of life."

The mouth is used to consume food and the deceased were offered the bread of life, called "the kmhw bread of Horus" in ancient Egyptian, and called " khenfu cake" in Akkadian. Khenfu cakes are mentioned in the 2500 BC Code of Ani. Ani/Anu is the Akkadian word for the High God and his son's Akkadian name is Enki. God the Spirit was called Enlil. Enlil is equivalent to the Hebrew word Ruach (Genesis 1), as it means the breath or wind of the Creator.

The image above shows a ka-priest presenting the bread of life in a basket. Note that the bread is round like the sun at the top of the image. The bread above is reflected in or replicated by the bread below. ("As in heaven, so on earth."). The sun was the emblem of God Father and God Son among the Horite Hebrew. As on Hezekiah's seal, it often appears winged and resembles the scarab or dung beetle that navigates by the Milky Way. The ancient Egyptians considered the Milky Way the path to eternity.


The Bread of Life

In The Pyramid Texts (2400 BC) we read: "O Hunger, do not come for me; go to the Abyss, depart to the flood! I am satisfied, I am not hungry because of this kmhw bread of Horus which I have eaten." (Utterance 338) It appears that the "kmhw bread of Horus" is the bread of immortality prefigured in Scripture as Manna in the wilderness. Jesus said, "I am the bread of life. Your forefathers ate the manna in the wilderness, yet they died.This is the bread that comes down from heaven, so that anyone may eat of it and not die." (John 6:48-50) Concerning himself, Jesus said that "unless you eat the flesh of the Son of Man and drink his blood, you have no life in you. Whoever feeds on my flesh and drinks my blood has eternal life, and I will raise him up on the last day" (John 6:53-54).

Certainly some biblical populations are still extant. The Jebusites are an example. They are called Jebu or Ijebu in Africa. Jebu rulers are installed with palm branches. Jude Adebo Adeleye Ogunade writes in his memoir about growing up Ijebu. He was warned not to touch the leaves of the Igi-Ose tree, because as his Mama Eleni explained: "That tree is the tree whose leaves are used to install Chiefs and Kings of Ijebu and as your grandfather was a custodian of the rites of chieftaincy and kingship you must not play with its leaves."

Jerusalem was a Jebusite city and a Jebusite tradition was observed when Jesus was greeted as King by people waving palm branches. 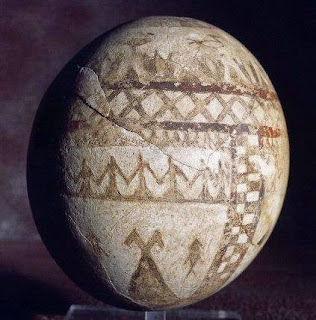 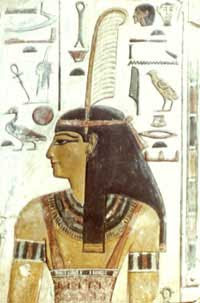 The eggs were placed in graves as an expression of hope for life after death. The ostrich feather was also symbolic of that hope. The personification of truth called Ma'at is shown with an ostrich feather in her hair. Using this feather, she weighed the hearts of the dead to determine who would enter eternal life and who would experience the second death (Rev. 2:11, 20:14).


(For further exploration of this topic, see this thread.)

Related reading: Understanding the Science of Biblical Anthropology; The Ra-Horus-Hathor Narrative; What Abraham Discovered on Mount Moriah; The Substance of Abraham's Faith; Ancient Words for Priests, Horite Mounds; The Sky Bull as a Messianic Symbol; Judaism is NOT the Faith of Abraham