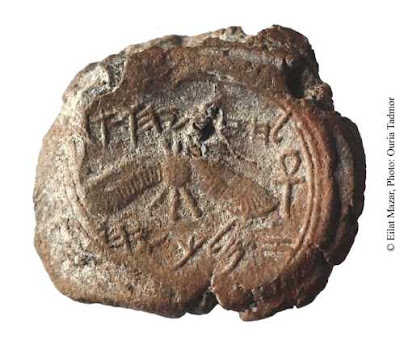 The Ankh and the winged sun/winged scarab are associated
with the Messianic beliefs of the Horite Habiru.


This remarkable seal or bulla of the Judean King Hezekiah was discovered by Efrat Greenwald at the Ophel, an ancient dump beside the wall that surrounds Jerusalem's Old City. This bulla was found with 33 additional bullae, many pottery sherds and figurines in Area A of the 2009 excavation season supervised by Hagai Cohen-Klonymus of Hebrew University in Jerusalem.

This is the first seal impression of an Israelite or Judean king ever exposed in situ in a scientific archaeological excavation.

Initial inspection failed to recognize the seal's importance and it was put in storage. Recently the bulla was identified by the Paleo-Hebrew inscription that says: "Belonging to Hezekiah [son of] Ahaz king of Judah" who reigned from 727 to 698 BC. II Kings 18:5 says of Hezekiah that “after him was none like him among all the kings of Judah, nor among them that were before him.” He is also mentioned in the annals of King Sennacherib. To protect the city's only water source, Hezekiah had a tunnel built to bring water from the Siloam Spring into Jerusalem.

The seal is significant because it identifies King Hezekiah with the Messianic belief of his Horite Habiru (Hebrew) ancestors. The bulla is imprinted with a winged sun or dung beetle flanked on both sides by the Egyptian ankh, the symbol of life.

The word "ankh" refers to the breath of Life, from akh, meaning spirit. From the Book of the Dead, we find these words spoken by the High God Ani: "O you Soul [ba], greatly majestic, behold, I have come that I may see you ... I am noble, I am a spirit [akh], I am equipped; O all you gods and all you spirits [akhu]..."

The ankh appears on hundreds of ancient images related to the hope of the resurrection. It is held, often by Hathor (mother of Horus), to the mouth of the deceased in the mouth opening ritual. The mouth is used to consume food and the deceased were offered the bread of life, called "the kmhw bread of Horus" in ancient Egyptian and called " khenfu cake" in Akkadian. Khenfu cakes are mentioned in the 2500 BC Code of Ani.
Both the winged sun and the ankh are symbols attached to the Horite Hebrew religion. They were devotees of God Father (Re/Ani) and God Son (Horus/Enki). Horus was the only Nilotic deity ever shown as a man. His narrative sets forth the Messianic expectation of Abraham's Nilotic ancestors.


One of the earliest known medical practitioners was Eanach (Enoch). He served the Pharaoh as his priest-physician, a wab sxmt (wab sekhmet). Eanach lived around 3000 BC, and is said to have "healed the pharaoh's nostrils." Likely, this involved placing the cross-like Ankh against the Pharaoh's nose and offering prayers for his healing.

Contrary to the official statement about this find, the winged sun and the winged beetle symbolize the same religious belief.  No change in symbolism is represented, and both images are representative of Horite Hebrew belief in bodily resurrection.

The African dung beetle rolls balls of dung along the ground and deposits them in its burrows. The female lays her eggs in the dung ball and when the larvae hatch, they feed off the dung until they emerge from the earth. The orb of the lowly beetle replicated on earth the solar orb of the Creator. Both were seen to sink below the earth and to give life to those buried in the earth.

The "rolling" dung beetle orients itself by celestial lights as it rolls a dung ball away from the competition. During the day it orients by the sun and at night by the Milky Way. The dung beetle can see the magnetic lines running north and south in the sky. From time to time, as the beetle pushes the dung ball, it stops and climbs on top of the ball to look around. The ancient Nilo-Saharans would have observed this behavior and it may have facilitated the alignment of their monuments to meridian cardinal directions and the solar arc.

In 1997 University of Colorado astronomy professor J. McKim Malville identified alignments at a megalithic complex in the desert at Nabta, west of the Nile River in southern Egypt. This site was seasonally inhabited by cattle herders between 11,000 and 4,800 years ago (Malville et al. 1998). One circle of standing stones exhibits a line-of-sight 'window' at an azimuth of 62 degrees; the direction at which the rising mid-summer sun would have been visible about 6,000 years BC. This is the oldest astronomically aligned structure yet discovered on the planet. Among Hezekiah's Horite ancestors the heart was the essential organ when it came to the resurrection of the body, as it would be weighed in the afterlife. The body of the pure heart would rise from the dead, as the sun rises in the morning. This is why the scarab was placed over the mummy's heart. The scarab was given the name Khoprer, which is derived from kheper, meaning "to become."

The beetle's young fed off the dung ball buried underground. Likewise, food was placed in the graves of the ruler in hope that he would come forth from the grave and lead his people to immortality. Heavenly recognition for the Horites was never an individual prospect. It came to the people through the righteousness of the ruler-priest. All failed to rise from the dead, save Jesus, the Son of God. Therefore, He alone has the power to deliver captives from the grave and to lead them to the throne of heaven (Ps. 68:18; Ps. 7:7; Eph. 4:8).

This story on the discovery has a slightly different take:

Late in Hezekiah's life, both the royal administrative authority and the king's personal symbols changed from the winged scarab, a symbol of power and rule throughout the ancient Near East, to that of the winged sun—a motif that proclaimed God's protection, that was employed by the Assyrian kings, including Sennacherib.

The "official" story doesn't hold up logically, nor does it align with the historical evidence. The winged sun and the winged beetle represent the same religious belief. No change in symbolism is represented.

Further, the dispersion of such royal symbols is expected given that the Horite ruler-priests reigned throughout the ancient Near East, which extended from the Nile to the Orontes in Turkey and to the Tigris-Euphrates Valley.

Why did it take 6 years to release this information? Efrat Greenwald, who discovered the seal, reads Paleo-Hebrew.

Why did it take 6 years to release this information?

I don't know. I imagine any physical evidence tying Jews to Israel from ancient times is considered sensitive, maybe even incendiary in these times.

Perhaps also because this excavation is being done at the Arab town of Silwan in East Jerusalem.

Statements issued about this project have been wrong in the past. On January 16, 2008, Eilat Mazar announced that her excavation team at the Ophel had uncovered an inscribed seal dating to the time of Nehemiah. She read the name on the seal as “Temech” (tav, mem and het). It was first thought that the seal indicated the Temech family, servants in the first temple in Jerusalem. They were among those taken into Babylonian captivity, as mentioned in Nehemiah: "These are the children of the province, that went up out of captivity, of those that had been carried away, whom Nebuchadnezzar, the king of Babylon, had carried away, and came gain to Jerusalem and to Judah, every one to his city." (Nehemiah 7:6)

European scholar Peter van der Veen questioned Mazar's theory, saying that she erred in her reading of the inscription. He pointed out something rather obvious: that the seal inscription should be read backward, since a seal creates a mirror image when pressed in clay. He argued on that basis that the seal bears these letters (shin, lamed, mem and tav) and that the correct reading is "Shlomit". Mazar later acknowledged that the seal should be read as "Shlomit."

This is really cool Alice!

I am reminded of Malachi 4:2 "But unto you that fear my name shall the SUN of righteousness arise with healing in His WINGS..."

One of my favorite verses!