The Church's Consensus on Women and the Priesthood 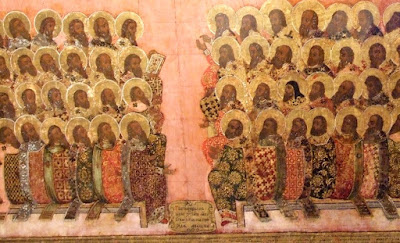 The Church is not a democracy in which sacred tradition, doctrine, and discipline can be changed by consensus. The Church already has a consensus...the Apostolic Consensus. When it comes to the question of women priests, the consensus is clear.

Consider what these Church Fathers have to say about women and the priesthood.

St. Irenaeus, "Against Heresies" (1.31.2) wrote, "After this he gave women mixed chalices and told them to give thanks in his presence. Then he took another chalice much larger than that on which the deceived woman gave thanks, and, pouring from the smaller... to the much later. . the larger chalice was filled from the smaller chalice and overflowed."

Tertullian, in "The Prescription of Heretics" (41), says: "How wanton are the women of these heretics! they dare to teach, . to dispute, to carry out exorcisms, to undertake cures, it may be even to baptize."

In his work "On Veiling Virgins" (9.1), Tertullian wrote: "It is not permissible for a woman to speak in church, nor may she teach, baptize, offer, or claim for herself any function proper to a man, and least of all the office of priest."

Firmilian, in Epistle 75.1-5 to Cyprian, tells of a woman who went into an ecstasy (shamanism?) and came out a prophetess. "That woman who first through marvels or deceptions of the demons did many things to deceive the faithful, among other things... she dared to do this, namely that by an impressive invocation she feigned she was sanctifying bread, and offering a sacrifice to the Lord."

Origen, in his commentary on 1 Cor 14:34 tells of the four daughters of Philip; who prophesied, yet they did not speak in the Churches. "We do not find that in the Acts of the Apostles... . For it is shameful for a woman to speak in the church."


"If women were ordained to be priests for God or to do anything canonical in the church, it should rather have been given to Mary... . She was not even entrusted with baptizing... Although there is an order of deaconesses in the church, yet they are not appointed to function as priests, or for any administration of this kind, but so that provision may be made for the propriety of the female sex [at nude baptisms]. Whence comes the recent myth? Whence comes the pride of women or rather, the woman's insanity?"

In 49. 2-3 St. Epiphanius tells of the Cataphrygians, a heretical sect related to the Montanists. He wrote:


The Cataphrygians pretended that a woman named Quintillia or Priscilla had seen Christ visiting her in a dream at Pepuza, and sharing her bed. He took the appearance of a woman and was dressed in white."Among them women are bishops and priests and they say nothing makes a difference' For in Christ Jesus there is neither male nor female... '' [Gal. 3:28]

St. John Chrysostom, in his treatise "On the Priesthood" (2.2) points out that Jesus said, "Feed my sheep" only to Peter. "Many of the subjects could easily do the things I have mentioned, not only men, but also women. But when there is question of the headship of the church... let the entire female sex retire."

In the same treatise (3.9) St. John Chrysostom wrote: "Divine law has excluded women from the sanctuary, but they try to thrust themselves into it."

St. Augustine, "On Heresies" (27) speaks of the Pepuzians mentioned by St. Epiphanius. "They give such principality to women that they even honor them with priesthood."
ACNA Bishop William C. Wantland, an authority on canon law, said, "I do not know if a woman can be a priest but I know that only a priest (or bishop) may offer the Eucharist." He concludes, "It would therefore be a great spiritual danger to allow a celebrant of doubtful validity to function..." He also wrote, "We Anglicans believe that the Eucharist, like Baptism, is a Sacrament 'generally necessary for salvation'... We also believe that only a Priest (or Bishop as High Priest) may offer the Eucharistic sacrifice... If (for the sake of argument) a woman cannot, in God's will, be a priest, then she cannot validly offer the Eucharistic sacrifice, nor am I then fed on the Body and Blood of Christ if I partake of her offering. My soul, no longer sacramentally nourished, is in mortal danger." (W. C. Wantland, The Catholic Faith, the Episcopal Church and the Ordination of Women, Diocese of Eau Claire, 1977, pp. 20-21)
Evelyn Underhill said that the chief reason for opposing the ordination of women in the Anglican Communion was her belief that "so complete a break with Catholic tradition cannot be made save by the consent of a united Christendom."
What has happened instead is a dangerous innovation initiated by the Episcopal Church which set aside catholicity when it broke with received tradition.
In his address to the 1978 Lambeth Conference (July 31), Canon John Macquarrie pointed out that many in the Anglican Communion “conscientiously believe that a woman cannot validly consecrate the Eucharist.” He added, “And who can prove beyond doubt that such persons are mistaken?”
The late Dr. J. I. Packer wrote, “Jesus is the second man, the last Adam, our great high priest and sacrifice, our prophet, priest, and king (not prophetess, priestess, and queen), and he is all this precisely in his maleness. To minimize the maleness shows a degree of failure to grasp the space-time reality and redemptive significance of the incarnation.” (J. I. Packer, “Introduction,” in Man, Woman and Priesthood, ed. James Tolhurst (Gracewing, 1989), p. 13. This reflects the binary worldview of the Scriptures. In dualism, the entities in a binary set are equal, but in the biblical worldview one entity in the binary set is observed to be superior in some way to the other. Thus, in the male-female set, males are seen to be larger and stronger than females, and it is the stronger that stoops to save, not the weaker.

Anglicans claim that their priests belong to the one universal Church and that the Eucharistic sacrifice is offered not only for those immediately present, but also for the whole Church. This cannot be true where the priest is a woman since she is not recognized as a priest by the universal Church. “Since the Church is universal,” writes Dr. C. B. Moss (1888-1964), “she requires a ministry which is universally recognized.”
The final report of the Anglican-Roman Catholic statement on the ordained ministry states that “every individual act of ordination is therefore an expression of the continuing Apostolicity and Catholicity of the whole Church.”

Related reading: Why Women Were Never Priests; The ACNA and the Priesthood of the Church; Men at Altar, Woman at the Empty Tomb; The Priesthood in Anthropological Perspective; God as Male Priest; C. S. Lewis on Women Priests

Thank you. The Episcopal Missionary Church thanks you.