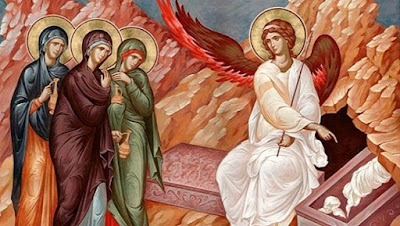 A woman standing as priest at the altar distorts the Gospel and creates confusion. Form and gender matter. However, the issue from an anthropological perspective is about the distinction between the blood work of men and women. Among the people to whom God first delivered the promise of salvation (Gen. 3:15) the two were distinct and never permitted to be confused. The blood work of men pertained to war and hunting. Women did not participate in these. The blood work of women pertained to the monthly cycle and childbirth. During these times women remained apart in a birthing hut or cave which men were not permitted to enter.

Women were the first to be at the empty tomb.

Related reading: Why Women Were Never Priests; Blood and Binary Distinctions; On Blood and the Impulse to Immortality; The Church's Consensus on Women and the Priesthood