My sister took a course in Anthropology which exposed her to the discipline of kinship analysis. On the final exam 25% of the questions dealt with kinship. This question posed a real challenge: “The biblical pattern of tracing genealogy is patrilineal.”
The answer that the professor wanted was “True.”
Since my sister has followed my Genesis research for years she knew that this statement is only true in part. In fact, the biblical Hebrew had a pattern of double unilineal descent in which both the patrilineage and the matrilineage are recognized and honored, but in different ways.

The Horite Hebrew had two wives. One was a half-sister (as was Sarah to Abraham) and the other was a patrilineal cousin (as was Keturah to Abraham). The first wife was the sister bride and the wife of the man's youth. The second wife was taken close to the time of the man's enthronement.
Because there were two wives, there were also two first-born sons, but only one was the proper heir. The proper heir was the first-born son of the first wife. The first-born son of the cousin bride belonged to the household of his maternal grandfather. In his study of primitive kinship patterns Claude Levi-Strauss recognized in 1949 that mother and child do not always belong to the same household or clan.

Isaac ruled over Abraham's territory in Edom because he was Sarah's first and only son. The firstborn son of the cousin wife served the throne of his maternal grandfather, after whom he was named. The pattern is evident in this diagram.

Lamech the Elder had two wives. HIs daughter Naamah (Gen. 4) married her patrilineal cousin Methuselah and named their first-born son Lamech, after her father (Gen.5:26.) 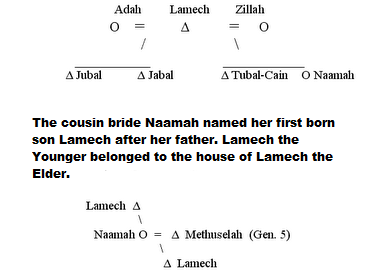 The line of the cousin wife is traced through the cousin bride’s naming prerogative. This custom explains why similar names appear in Genesis 4 and 5 two generations apart. For example: Irad’s daughter married her patrilineal cousin and named their first born son Jared after her father. Irad and Jared are linguistically equivalent names. Irad/Yrd is mentioned in Genesis 4:18 and Jared/Yrd is mentioned in Genesis 5:15. 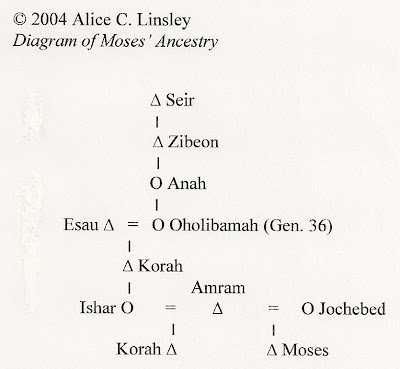 Amram's cousin wife was Ishara/Izhar. She named their firstborn son Korah after her father. Korah the Younger ascended to the throne of his maternal grandfather. This means that Jochebed was Amram's half-sister wife. All of the people in this diagram are descendants of or kin to Seir the Horite Hebrew ruler (Gen. 36).

Note that there are two named Esau in the diagram above. Esau the Elder married Adah, the daughter of Elon the Hittite. Esau the Younger married Oholibamah, the daughter of a Horite female chief named Anah. Esau the Younger would have been named for his mother's father, Esau the Elder. It is impossible to determine which wife was Esau the Younger's mother because the data is conflated in Genesis 26:34 and Genesis 28:9. Genesis 36:10 suggests that Esau the Elder's wives were Adah and Basemath. Both were Hittite brides, and probably the daughters of Horite Hebrew priests living among the Hittites of Canaan. The other wives are Judith (Hittite), Mahalath (Ishmaelite), and Oholibamah (Horite Hebrew). One of these women was probably a concubine, not a wife.
This would mean that Esau was Jacob's half-brother. Esau was the son of Isaac's half-sister bride and his proper heir. Jacon was th son of Rebecca, Isaac's cousin bride. As such, Esau and Jacob would not have been in competition to rule over Isaac's territory. Esau was the proper heir and Jacob was the sent-away son. As Isaac's first-born son by his half-sister wife (a daughter of Abraham and Keturah), Esau would rule over the territory of his father Isaac. Jacob would have been sent away to establish himself in another territory.

The cousin bride's naming prerogative pertained to noble wives, not to concubines. Only the first-born sons ascended to rule in the Hebrew clans. The first-born of the first wife was the proper heir of his biological father. This explains why Isaac was Abraham's proper heir. The first-born son of the cousin bride served as a high official in the territory of his maternal grandfather.
Other sons were given gifts and sent away to establish territories of their own (Gen. 25:6). Many of the Bible's greatest figures were sent-away sons who had to rely on God's direction and provision to become established in their own territoires. This marriage and ascendancy pattern drove Kushite expansion out of Africa as has been confirmed by DNA studies. The same pattern contributed to the wide dispersion of the Horite Hebrew.
This marriage pattern is found among the Kushite pharaohs. For example, the Kushite ruler Amenhotep III was the father of Akhenaten the Younger who was named by Amenhotep's cousin wife after her father. This means that Akhenaten the Younger ascended to the throne of his maternal grandfather, after whom he was named.
Egypt under the Kushites had two thrones (symbolized by the double crown) and Horus was said unite the peoples. The Horite Hebrew were devotees of the High God and his son Horus. This belief in God Father and God Son is central to the faith of Abraham and his Horite Hebrew people. Abraham's faith lives in Christianity.

The “begets” of Genesis 4 and 5 present a very old kinship pattern which I have diagrammed and analyzed using E.L. Schusky’s Manual for Kinship Analysis, one of the most important books of the 20th century because it presents a method for understanding ancient kinship patterns such as described in the Bible. Kinship patterns are like cultural signatures that can be used to trace the original homeland of a people or caste. The analysis of the kinship pattern presented in Genesis 4 and 5 directs us to the homeland of Abraham’s ancestors, who were ethnically Kushite. The antecedents of the Abraham's faith are found among the ancient Nilotes and Proto-Saharan ruler-priests.

Analysis of the pattern shows that Cain and Seth married the daughters of a chief named Enoch. These brides named their first-born sons after their father. So it is that Cain's firstborn son is Enoch and Seth's firstborn son is Enosh. The names are linguistically equivalent and derived from the root NK. The names are related to African words that designate a proper heir or the one who its to ruler after his father. Enoch, anochi means one who ascends to the throne and the one who is heir. The title corresponds to the Hebrew first person singular pronoun forms anoki and ani and to the Akkadian first person singular pronoun anaku. In ancient Egyptian, the equivalent pronoun is ink which is related to the word Anochi, referring to the royal first person.
Among the Igbo, anochie means “a replacer” or “to replace” and among the Ashante the word anokyi means "Ano Junior" or the "Ano who follows his father." In both cases, one finds the idea of succession from father to son, suggesting a line of descent. A Nigerian friend reports that anochie also means "direct heir to a throne." The word Enoch is clearly associated with royal ascendancy.
Today a similar pattern is found among Nilotic and Kushitic rulers and metal working chiefs in Niger, Sudan, Nigeria, Cameroon, and the Horn of Africa. Emmanuel Kenshu Vubo, of the Department of Sociology and Anthropology of the University of Buea, Cameroon, has done a good deal of research on this among the peoples of Cameroon. However, the marriage and ascendancy pattern of the Horite Hebrew appears to be distinctive and probably unique to that ruler-priest caste.
The marriage and ascendancy pattern of these ancient rulers drove expansion into Africa, the Middle East, and Southern Europe. These are the Sumerian and Akkadian rulers of Genesis 11:1.


Before a man could become chief in his father's place, he had to have two wives. Rulers with this pattern include Lamech, Terah, Abraham, Jacob, Amram, Moses, Jesse, Elkanah, Ashur, Mered and Joash. The wives maintained separate households,usually on a north-south axis. Abraham's half-sister wife Sarah resided in Hebron, and his cousin wife Keturah resided in Beersheba to the south of Hebron. Their households marked the northern and southern boundaries of the chief’s territory.

The wives were placed on a north-south axis rather than on an east-west axis because the east-west axis marked the territory of the High God whose symbol was the Sun which makes a daily journey from east to west. Lamech's wives were Adah (dawn) and T-Zillah (dusk), suggesting that he assumed for himself equality with God.

If Esau and Isaac were from different mothers, doesn't this contradict what we read in Genesis and in Jasher 26:12 where Rebecca was pregnant with twins that fought within her? If they were from 2 different mothers wouldn't there be record of this?

Kirsten, there is no biblical proof that Rebecca was the mother of both, and the book of Jasher is a late text.

Lamech, Terah, Abraham, Jacob, Amram, Moses, Jesse, Elkanah, Ashur, and Joash are among the Horite Hebrew with two wives. Abraham's two wives were Sarah (his half-sister) and Keturah (his patrilineal cousin). They resided in separate settlements in Hebron and Beersheba.

I appreciate your prompt response. I am just trying to get an understanding of what you are proposing. What about Gen 25:24? Can you explain what you mean by biblical proof?
Thank you much!

Kirsten, a combox response to your questions would be insufficent. I invite you to join this international Facebook group where we discuss these matters: