Rebecca Ran to Her Mother's House 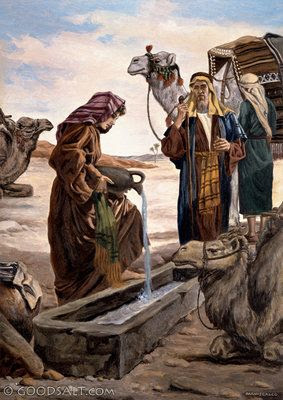 The man [Abraham's servant] bowed his head and worshiped the Lord and said, “Blessed be the Lord, the God of my master Abraham, who has not forsaken his steadfast love and his faithfulness toward my master. As for me, the Lord has led me in the way to the house of my master's kinsmen.” Then the young woman ran and told her mother's household about these things. Genesis 24:27-28


A very ancient practice is alluded to in Ruth 1:8-9. Here Naomi urges her daughters-in-law to return to their “mother’s house.” This is Naomi’s way of encouraging Orpah and Ruth to remarry. Hoping that they will marry again, Naomi sends them back to their mothers.

The “mother's house” is where women gathered to plan weddings for betrothed girls. The women attended to the practical arrangements for weddings and the items needed to set up a new household. On the other hand, the “father's house” was where the fathers deliberated the terms of the marriage involving dowry, inheritance, and property. The elders of the village were present to witness the deliberations.

Sometimes fathers denied marriage to eligible daughters. A woman who was forbidden to marry (or re-marry) was to return to her father's house. When Judah refused to marry another of his sons to Tamar, as was required by the Levirate marriage law, he told her to return to the father’s house (Gen. 38:11).

This practice entails more than preparing for a wedding and a new household. It is about building a lineage. Naomi tells both of her widowed daughters-in-law to return to their "mother's house" so that they can remarry and have families. The perpetuation of the lineage also guaranteed the survival of the clan.
Apparently, a dissatisfied concubine could return to her father’s house. Judges 19 tells the story of the abusive Levite's concubine. She left him in anger and returned to her father's house in Bethlehem where she remained for four months before he came to win her back. Then it took five days of deliberations between the woman’s father and the Levite before he was able to leave with his concubine. Unfortunately, she was sexually assaulted by the men of Gibeah (Saul’s hometown), and she died as a result of her injuries. This same Levite made her tragic death the cause of great violence among the Israelites. He inflamed the clans who attacked the Benjaminites, and in the ensuing war the clan of Benjamin was routed. According to Judges 21, the men of Israel swore an oath at Mizpah, saying, "None of us shall give his daughter to Benjamin as a wife."
It is likely that Dinah returned to the father’s house after she was raped near the city of Shechem. In an act of vengeance, her brothers Levi and Simeon killed the men of Shechem (Gen. 34).

Related reading: Wells and Brides; A Woman at a Well; The Daughters of Horite Hebrew Priests; Mother's House and Father's House; Translating the Bible: The Case of the Abusive Husband by Dr. Claude Mariottini