A Woman at a Well

Archaeologists have found many images of women at wells in Palestine and Syria. Below is a detail of the baptistery painting form Deir ex-Zor in Syria. Some believe that this may be an image of the Virgin Mary. However, it more likely is an image of Photini, the Samaritan woman who Jesus spoke to at Jacob's well.

Photini is esteemed among Christians. In the Eastern Church, she is regarded as "equal to the Apostles." She was the first evangelist, and tradition holds that she and her children were martyred in Carthage. 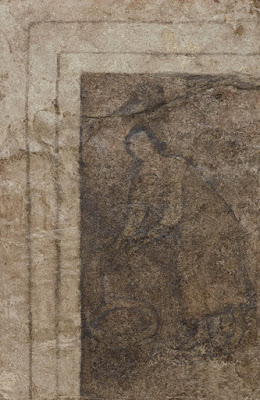 
In the Bible brides are often met at wells. In this sense, Photini represents the Bride of Christ, the Church. Her meeting with the Lord Jesus points to the Wedding Feast of the Lamb when Christ returns as the Bridegroom.

“Therefore blessed Jacob, as you have heard, went into Mesopotamia to take a wife. When he had come to a certain well, he saw Rachel coming with her father's sheep - after he recognized her as his cousin, he kissed her as soon as the flock was supplied with water. If you notice carefully, brothers, you can recognize that it was not without reason that the holy patriarchs found their wives at wells or fountains. If this had happened only once, someone might say it was accidental and not for some definite reason. Blessed Rebekah who was to be united to blessed Isaac was found at the well; Rachel whom blessed Jacob was to marry was recognized at the well; Zipporah who was joined to Moses was found at the well.” (Sermon 88:1)


The list of ruler-priests daughters who were first approached at wells includes:  Keturah, Rebekah, Rachel and Zipporah, Asenath, and Tamar. All these women grew up around shrines where their fathers served as priests. Asenath’s father was a priest of the Egyptian shrine at Heliopolis on the Nile. Zipporah’s father was a priest of a shrine in the Negev. Tamar’s father is identified in Targum Pseudo-Jonathan as the priest Shem of Melchizedek. This explains why Tamar was to be stoned to death. According to Leviticus 21:9, a priest's daughter guilty of prostitution or adultery was to be executed by this means.

These daughters of priests were women of high rank but they did not live pampered lives. Zipporah was drawing water for her father’s livestock when she met Moses. Rebekah was likewise engaged when Abraham’s servant arrived to contract a marriage between her and Isaac.

Note that most of these priestly daughters had two sons:

Often the younger son receives a position of priority or a familial blessing. Both sons are ancestors of Messiah, however, since the early Hebrew lines intermarried. We find this preference for the youngest son in the stories of Abraham, Terah's youngest son, and David, Jesse's youngest son.

Let’s take a closer look at each of these women.

Keturah, Abraham’s Cousin Wife
Keturah resided at the Well of Sheba (Beersheba) where Abraham went to take her as his cousin wife. She was the daughter of the priest Joktan. According to the cousin bride’s naming prerogative, she named their first-born son Joktan after her father. She bore Abraham six sons. Her son Midian is the ancestor of Zipporah who married Moses.

Rebekah's father was Bethuel. Bethuel was Abraham’s nephew, the son of his brother Nahor who ruled over Terah’s territory on the Euphrates River. His name means "House of God" and likely refers to his shrine.

Rachel was Jacob's cousin wife. She was of the clan of Laban. It is likely that she and Leah were half-sisters. Jacob met her while she was drawing water at the well. She bore him two sons, both of whom are significant ancestors of Jesus Messiah. The oldest son, Joseph, married Asenath, the daughter of a priest of Heliopolis, the most prestigious shrine city on the Nile at that time.

Asenath bore Joseph two sons: Manasseh and Ephraim. Ephraim, the younger son, was tagged as an ancestor of the Jesus, God’s Son. Asenath's name means “holy to Anath.” Anath was goddess who was sometimes called Mari-Anath, the consort of the high God. Some water shrines were dedicated to her, and women came to these shrines to ask the High God for children or to ask for healing (compare to John 5).

Zipporah was Moses’ wife and a daughter of Jethro, Priest of Midian. Her name is derived from the word ציפור (tsipor, meaning “bird”). Moses met her at a well where she and the other women were being harassed by Egyptians. She bore Moses two sons: Gershom and Eliezer. The younger son was Eliezer, whose name means "God is my help”, is tagged as the ancestor of Jesus, the Son of God. Jacob gives the blessing reserved for the firstborn to Ephraim (Gen 48). Ephraim's descendants inhabited the principal Canaanite settlements, including Baal-shalisha which means the Three-God or the God associated with the number three.

In 1 Chronicles 23:17, we read about Eliezer’s descendants: "Rehabiah was the first. Eliezer had no other sons, but the sons of Rehabiah were very numerous.” Note that the name of Eliezer's only son is a variant of the name Rehab. Rehab, who dwelt in Jericho, was another ancestor of Jesus Christ.

In 1 Chronicles 23:17, we read about Eliezer’s descendants: "Rehabiah was the first. Eliezer had no other sons, but the sons of Rehabiah were very numerous.” Note that the name of Eliezer's only son is a variant of the name Rehab. Rehab, who dwelt in Jericho, was another ancestor of Jesus Christ.

Rahab helped Joshua and Caleb to capture the city of Jericho. She lowered the spies from a window and tied a scarlet cord from the window to protect her household when the Israelites attacked. The scarlet cord, like the blood of the lamb on the doorposts in Egypt, is a sign of the Blood of Jesus.

Tamar was Judah’s daughter-in-law who bore him twin sons after he had intercourse with her at a shrine. Possibly this was the shrine of her "father's house" to which she was sent by Judah when he refused to provide her another of his sons as levir. [2]

Tamar's name means date nut palm. The tamar was a symbol of fertility. Judah praised Tamar as "more righteous” than himself (Gen. 38:26) because she found fulfilled the levirate law when he failed to do so. The younger of Tamar's two sons was Perez, is tagged as an ancestor of Jesus Christ. The book of Ruth tells us that King David is a descendant of Abraham through Perez.


The Pattern in the New Testament

In the New Testament, we find the pattern with Photini, the Samaritan Woman at Jacob’s well. According to Tradition her name is Photini and she symbolizes the Church, the "Bride of Christ". The well represents refreshment and a place of ritual cleansing, like baptism. Caesarius of Arles explains that Isaac, Jacob and Moses are types of Jesus Christ, "for this reason they found their wives at wells, because Christ was to find His church at the waters of baptism."

Mary's father was Joachim and tradition tells us that he was both a priest and a shepherd. This meant that he would have needed a well or river to water his flocks. Mary's husband was Joseph of Bethlehem [3], the city of David. According to 2 Samuel 24, David built an altar at the threshing floor of Araunah, the Jebusite. Here the shepherd David is shown as a priest, the dual roles that characterize the ruler-priests whose patrilineal lines intermarried, bringing us to the house of Joachim, Mary's father, who was both priest and shepherd.

Widows attached themselves to shrines and temples once their husbands have died. This is what happened in the case of the Prophetess Anna (Luke 2:36-38). She had been living in the temple precincts for many years when Mary brought Jesus to the temple. She beheld the Christ child and proclaimed to all the appearing of Messiah.

Osofo Ahadzi explains that women consult deities at the water shrines in order to have children. These children are often pledged to the shrine or to the deity (as Hannah pledged Samuel to God in return for blessing her with a child). Ahadzi says that people who fail to redeem such pledges eventually lose those children.

The same practice is evident at Hindu temples. Dr. Shabhash C. Sharma writes, "Regarding the treatment of people (including the young girls and widows) in shelters, temples and orphanages, Hinduism is quite emphatic in its opposition to any abuse and exploitation at the hands of those in positions of power and authority: 'He, who betrays one who has sought refuge, will meet destruction. The very earth will not let the seed that he sows, sprout.' The Mahabarata (1, p. 181).

Dr. Sharma further explains: "Sometimes even if the parents of a young girl or boy are alive, they might not be in a good socio-economic condition to take care of their kid and thus could decide to send her/him to live in a temple thinking that the temple would do a better job in raising their child. Thus the temple might be considered by some people an ideal place to raise their child where free room, board and education (in spirituality, arts, music, dancing etc.) are available, perhaps in return for a small or light physical (manual) service (work) to the temple."

Dr Sharma explains: "The same type of consideration, as indicated above for young girls, is generally applicable to adult women, especially the widows, when they decide to live in temples and religious places like Vrindavan. Note that even though the widows living in such places (temples etc.) might number in several thousand they still represent an extremely small minority relative to millions of Indian widows..."

1. While it seems that most of the stories of conflict between brothers involve two brothers, there is always the larger picture to consider which often involves a third brother. For example: Abel is killed and Seth is his replacement. Abraham's older brother Haran is said to have died in Ur. Usually, one of the three sons is less well known, dies, or even hidden in the text. This is the case with the three brothers Magog, Og and Gog. We have to hunt to find Og, because this third brother is hidden in the text. Another example is the three-clan confederation of Uz, Huz and Buz (Gen. 22; Gen. 36:28). We note the pattern of three sons here:

Moses was one of three sons. His brothers Aaron and Korah were both priests. Korah was a direct descendant of Seir the Horite Hebrew ruler of Edom (Gen. 36) 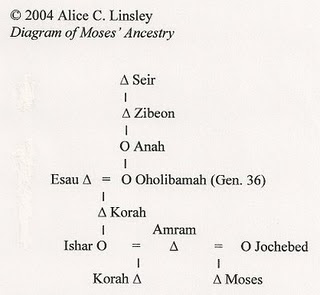 It appears that the three sons formed a three-clan confederation. The same trait is found among the extant Jebusites. While there are two Jebu provinces, there are three brothers: Yoruba, Egba and Ketu. We find this same two kingdoms-three brother pattern in Genesis.

2. The practice of levirate marriage is very ancient. The term is derived from the Latin word levir, meaning "husband's brother". When a man died without a man heir, his widow was married to the next oldest son whose duty it was to produce a son for his dead brother.

3. Bethlehem was a Horite Hebrew town and the Horites and Jebusites shared common ancestors. I Chronicles 4:4 lists Hur (Hor) as the "father of Bethlehem".

Related reading: Wells and Brides; Where Abraham Spent His Old Age; The Daughters of Priests; The Two Brides of Christ; Three-Clan Confederations to Twelve Tribes