The Celestial Dance Observed by the Magi

Rick Larson spent over eight years researching the Star of Bethlehem and discovered the difference between sidereal astronomy and astrology. Sidereal astronomy is real science, based on observation of the arrangement and movement of the fixed stars and planets. This science originated among Abraham's Nilo-Saharan ancestors who had recorded information about the fixed stars and clock-like motion of the planets and constellations for thousands of years. They shared this knowledge with the kings of Egypt. 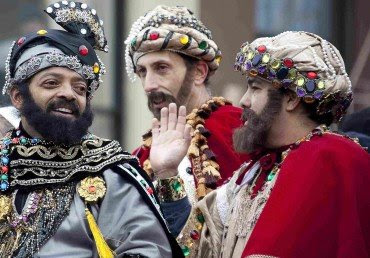 The Magi were sidereal astronomers who lived east of Israel, probably in Babylon. They were heirs of the same astronomical knowledge as the ancient Egyptians because they were from Judah, like Daniel and the other men of Judah (Jews) who served as advisers to King Nebuchadnezzar.

They clearly were aware of God's promise concerning a King whose kingdom shall endure through all the ages (the Messianic Psalm 145:13, which is found repeatedly in Daniel, punctuates the theme of the rise and fall of kingdoms). These astronomers from the East recognized the singular event of Jupiter's triple spiral that brought it in close proximity to Regulus. The Babylonians called Regulus 'Sharu', which means 'king.' The Persian (Farsi) word shir means lion (leo).

Using Starry Night, a soft ware program that can track celestial events at any time in history, Larson discovered that Jupiter, the Planet of Kings met Regulus, the Star of Kings at the beginning of the Jewish New Year in the year 3 BC. The conjunction produced the appearance of a single extraordinarily bright star. Larson believes that this is when the Angel Gabriel announced to Mary that she was chosen to bear Messiah.

Larson explains, "In 3/2 BC, Jupiter's retrograde wandering would have called for our magus' full attention. After Jupiter and Regulus had their kingly encounter, Jupiter continued on its path through the star field. But then it entered retrograde. It 'changed its mind' and headed back to Regulus for a second conjunction. After this second pass it reversed course again for yet a third rendezvous with Regulus, a triple conjunction. A triple pass like this is more rare. Over a period of months, our watching magus would have seen the Planet of Kings dance out a halo above the Star of Kings. A coronation."

We know from the number symbolism of the Afro-Asiatic peoples that the number 3 associated with a King means universal shalom. This message of peace corresponds to the angels' proclamation to the shepherds tending their flocks outside Bethlehem at the time of Jesus' birth.

The plurality of stars, planets and constellations speaks of the immeasurable nature of the universe, yet all are the work on the Ancient of Days, who alone is God, dwelling in light. The unique celestial events that surround the Annunciation, Nativity and Visitation of the Magi (the first Christmas) confirm that God set the universe's clock from before time. The orderliness of the heavens was such that the astronomers of old, whose work it was to observe the heavens, could not have missed the conjunction of Jupiter and Regulus and the emergence of Virgo, the Virgin, with the sun at her head and the moon at her feet.

As Vern Poythress has said, "So, at the very beginning of arithmetic, we are already plunged into the metaphysical problem of unity and plurality, of the one and the many. As Van Til and Rushdoony have pointed out, this problem finds its solution only in the doctrine of the ontological Trinity."

Related reading: Horite Expectation and the Star of Bethlehem; Who Were the Wise Men?; David's Royal City; The Ark Rested in Bethlehem

Yes, and there is evidence of a connection between the Vedic astrologers and the Babylonian magi. Larson picks up on this when he mentions that the West held the Eastern astronomers (the Bible calls them astrologists) in highest regard because the science was so well developed, in the sense of having extensive records, that there was predictability. That is why they could easily identify the celestial anomaly. Sidereal astrology/astronomy is very old, going back to the Afro-Asiatic Dominion that we have discussed before.

Good to hear from you, my friend!