A Coptic Monk Reflects on Genesis 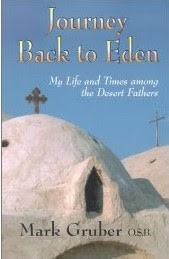 Abuna Elia was one of the disciples of the monastic reformer, Abuna Mina el Muttawahad, who rejuvinated monasticism in Egypt in the 1940s and 1950s. Abuna Mina later became the Coptic Patriarch, Pope Kyrillos VI.
Abuna Elia was the only one of Abuna Mina's original disciples who didn't become a bishop, an abbot, or a pope. He lived for about a decade as a solitary in a cave in the desert. Concerned monks of St. Bishoi (Pishoy) brought him to their monastery when he was no longer able to care for himself in the harsh desert environment. As the monks were carrying the aged monk into the monastery, Abuna Elia saw Mark Gruber, an American Benedictine monk and Catholic priest. Fr. Gruber was staying with the monks to conduct a year-long anthropological study. At the gate of the monastery, the aged monk turned to Fr. Gruber and said, "You are a Roman... You will want to see me; you will want to have some opportunity to talk with me."
Fr. Gruber reponded, "Yes, Abuna. I would be very happy to see you."
This fateful encounter led to numerous conversations between Abuna Elia and Fr. Gruber, and some of Abuna Elia's thoughts are presented in Fr. Gruber's books: Journey Back to Eden and Sacrifice in the Desert (Orbis Books). Journey Back to Eden is available to read online here.