Numbers and the Kingdom of God

St. Augustine (A.D. 354-430) wrote: “Numbers are the universal language offered by the Deity to humans as confirmation of the truth.” St. Augustine argued against the Donatist, Tichonius, observing that "if Tichonius had said that these mystical rules open out some of the hidden recesses of the law, instead of saying that they reveal all the mysteries of the law, he would have spoken truth" (De Doctrina Christiana, III, xlii).

The Church Fathers recognized that mystery surrounds the divine, but they condemned magical use of numbers in occult practices. They observed patterns in the numerical symbolism of Scripture. St. Ambrose, commenting on the days of creation, explained that interpretation for the Christian relies upon the guidance of the Holy Spirit. He wrote:


"The number seven is good, but we do not explain it after the doctrine of Pythagoras and the other philosophers, but rather according to the manifestation and division of the grace of the Spirit; for the prophet Isaias has enumerated the principal gifts of the Holy Spirit as seven.”

The Church Fathers were not interested in philosophical speculation about numbers. However, they did wish to lift up the meaning of Scripture according to the tradition which they received, a tradition that Jesus Himself drew on; a Tradition rich in number symbolism, typology, and pattern. Perhaps Ambrose’s view takes into consideration the consistency of number symbolism throughout the Canon.

Casting lots was a method of selecting and is not occult. It is based on probability and it is likely that the ancient Horite Hebrew understood that randomness resolves in patterns. They would have viewed these patterns as being fixed by the Creator.

One form of divination that God allowed was done only by the High Priest. This is sometimes referred to as "cleromancy". Exodus 28:30, explains that the Urim and the Thummim (probably sets of stones) were in the breastpiece, "so they may be over Aaron’s heart whenever he enters the presence of the Lord. Thus Aaron will always bear the means of making decisions for the Israelites over his heart before the Lord.” One set was white and the other was black. These appear to represent a yes-no approach to decision making consistent with the binary worldview of the Horite Hebrew. These seem to represent binary sets. The urim would have a number of associations which would be assigned the opposite meaning with the thummim. Using these tools involved yes-no questions, but also a cosmological framework by which meaning was expressed. That would involve considerations such as the four directional poles, sacred centers, gender, numbers, and reversals.

The prophet of old, the moreh, gave instruction from their trees. Abraham consulted the Moreh at Mamre who sat under a great Oak. Deborah sat under a tamar, or date nut palm. These prophets, like John the Baptist, were away from the population centers. People had to make an effort to travel to them. Further, their trees appear to be at the sacred center between two shrine cities. The oak of the moreh was between Ai and Bethel, on an east-west axis. The tamar of Deborah was between Bethel and Ramah, on a north-south axis.

The number symbolism of the ancient prophets represents a system that assigned numbers and gender virtues to the north, south, east and west. Thus the number one is assigned to north, and north is associated with the heavens, God’s eternal throne. The number six is assigned to sacred center (tiferet), a state of harmony or equilibrium.The number nine represents the west, the future, the bridal chamber, and the consummation of the celestial union.

When the number 3 is associated with south, fertility, productivity, and peace on earth (shalom). It is that state of heaven coming down (the advent of God, Messiah's Incarnation). This is evident in the description of the New Jerusalem in Revelation. The city has twelve gates and sits on twelve foundation stones (Revelation 21:12-14). Three face east, three face north, three face south, and three face west. We may illustrate this as follows

Imagine a circle with north as a point at the top center. This also represents high noon, a time of no shadows. This position of priority is assigned the number 1, symbolizing the Uncreated Hidden God (Ain Soph). Directly opposite is the point south, assigned the number three. It is associated with marriage and fertility, divine overshadowing and miraculous conception.

In Genesis the numbers two and seven point to a kingdom given or revealed. We see this in the necessity for two wives to establish a kingdom. Sarah resided in Hebron (Kiriath-Arba) and Keturah in the region of Beersheba. Their separate households were on a north-south axis and marked the northern and southern boundaries of Abraham's territory in Edom (Idumea - land of red people). 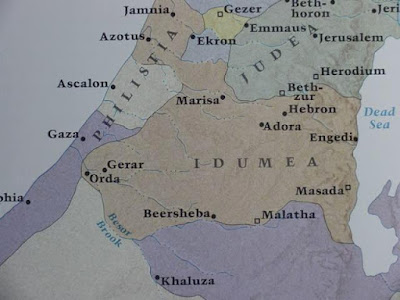 In the story of Joseph’s interpretation of dreams in Genesis 40-41, we find a pattern involving the number two and seven:

Compare this to Luke 10:1-20 which uses two and seven to speak of the Kingdom:

70 + 2 appointed to proclaim the Kingdom
2 sent (in pairs) to declare peace to many households
2 cities: Chorazin and Bethsaida, where Christ perform miracles and none repented (Luke 10:13)
2 cities: Tyre and Sidon, where the Prophet Elijah performed miracles and Jesus was recognized as Messiah (Mark 3:8; 7:24).

The number two speaks of a kingdom given and received. The ancient kingdom builders built up their houses through two wives and two concubines. This was the pattern until the time of David and Solomon. The first born sons of the two wives did not share their father's throne. The proper heir was the first born son of the first wife. This wife was a half-sister, as was Sarah to Abraham. So, Isaac was Abraham's proper heir. His first born son by Keturah was Joktan. He was named after Keturah's father and served as a high ranking official in the territory of his maternal grandfather, after whom he was named. This is pattern characterizes the marriage and ascendancy pattern of the Horite Hebrew.


Related reading: Number Symbolism in the Bible; Yes, Georgia, there is a Kingdom; Jesus Christ in Genesis; Kushite Kings and the Kingdom of God; Genesis on Sons and the Son

I responded to that report here:

The Pella temple in Jordan is very interesting in that the Bronze age structure has east-facing entrances for the light of the rising sun to enter. The temple is aligned to the solar arc. The huge entrance columns resemble those at Herod's temple. His ancestry was in Edom.

The Edomites built temples with pylons like those of Egyptian temples. One of the most prestigious temples was at Heliopolis (Biblical On) where Joseph married the daughter of the high priest. People who lived there called the place Iunu, meaning place of pillars.