Eusebius Hieronymus, better known as St. Jerome (c.347-420), was one of the most learned men of Christian antiquity. His grasp of ancient Semitic roots is astonishing. He was a classically trained scholar who became a monk and resided in Bethlehem, practicing extreme ascetical practices. He is the translator of the Latin Vulgate and a gifted interpreter of the Bible. The following reflections of St. Jerome on Genesis help us to understand some of the more difficult passages. 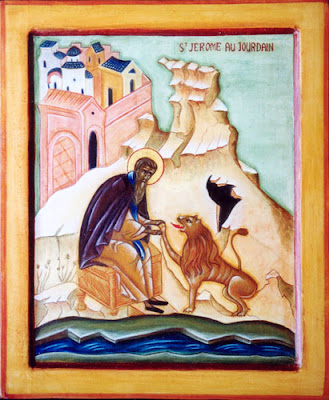 To be sure, if there was water and the Spirit, there was also from the beginning the Pleromic Blood of Jesus, for these three - the water, the Spirit and the Blood - bear eternal witness to the Truth.

On the Tree of Life at the sacred center

Now if wisdom is the tree of life, Wisdom itself is Christ. You understand now that the man who is blessed and holy is compared to this tree - that is, he is compared to Wisdom. Consequently, you see too that the just man, that blessed man who has not followed the counsel of the wicked - who has not done that but has done this - is like the tree that is planted near running water. He is, in other words, like Christ, inasmuch as he "raised us up together and seated us together in heaven." You see then that we shall reign together with Christ in heaven. You see too that because this tree has been planted there together with him. (Homilies 1)


On the building up of the Church

"God took a rib from the side of Adam and made it into a woman." Here Scripture said aedificavit ("built"). The concept of building intends to denote the construction of a great house; consequently Adam's rib fashioned into a woman signifies, by apostolic authority, Christ and the church, and that is why Scripture said he formed (aedificavit) a woman from the rib. We have heard about the first Adam; let us come now to the second Adam and see how the church is made (aedificatur) from his side. The side of the Lord Savior as he hung on the cross is pierced with a lance, and from it there comes forth blood and water. Would you like to know how the church is built up from water and blood? First, through baptism of water, sins are forgiven; then, the blood of martyrs crowns the edifice. (Homilies 66)


On God's coming to Adam in the cool of the day
We read in Genesis that when Adam transgressed, when he paid heed to the serpent rather than to God, when he hid himself from the face of God, then God came into the garden and was walking about in the cool of day. Now listen to what the Scripture says. God sought out Adam, not at midday but in the evening. Adam had already lost the sunlight, for his high noon was over. (Homilies 1)

Here we see that St. Jerome knew the Tradition that speaks of God meeting man at high noon when there are no shadows. Noon is the sacred center of the day. This is what St. James intends us to understand when he writes, "every good giving, and every perfect gift is from above, coming down from the Father of lights, with whom is no variation, or shadow of turning."


On Methuselah's Dying in the Year of the Flood

There is a famous question that has been aired by discussion in all the churches: that by a careful reckoning it can be shown that Methuselah lived fourteen years after the flood. It appears that in this case as in many others, in the Septuagint translation of the Bible there is an error in the numbers. Among the Hebrews and the books of the Samaritans, I have found the text written this: "Methuselah lived a hundred and eighty-seven years and became the father of Lamech. Methuselah lived after the birth of Lamech seven hundred and eighty-two years and had other sons and daughters. Thus all the days of Methuselah were nine hundred and sixty-nine years; and he died. And Lamech lived one hundred and eighty two years and begot Noah." Accordingly, there are 369 years from the day of Methuselah's birth to the day of Noah's birth; to these add Noah's six hundred years, since the flood occurred in the six hundredth year of his life, and so it works out that Methuselah died in the nine hundred sixty-ninth year of his life, in the same year when the flood began. (Hebrew Questions on Genesis 5:25-29)

Here Jerome notes the discrepancy between the Septuagint and the Hebrew and Samaritan texts. The Septuagint has Methuselah living for 14 years after the flood. The Hebrew and Samaritan texts have him dying the year of the flood. It is possible that the Septuagint was influenced by the Babylonian Talmud in assigning these 14 years. In the Babylonian tradition, 14 - the sum of 7+ 7 - represents the fullness of time. In the Hebrew and Samaritan tradition, which use a base 9 counting system, the 369 years from Methuselah's birth to Noah's birth is obviously symbolic. It signifies the end of unity on earth, and the 600 years of Noah's life signifies that two lines of descent from Noah will be established on earth (which happened with the lines of Shem and Ham, which intermarried).

In either case, the flood of Noah occurred during a wet period that lasted about 500 years in the region of Lake Chad and the symbolic numbers assigned to the antediluvian patriarchs are sensible in the context of the Afro-Asiatic cosmology of Abraham's people. As removed as Westerners are from the ancient deep reading of the Scriptures, it would help us were this to be "aired by discussion in all the churches."

On the deeper meaning of the Ark's dimensions

We read in Genesis that the ark that Noah built was three hundred cubits long, fifty cubits wide and thirty cubits high. Notice the mystical significance of the numbers. In the number fifty, penance is symbolized because the fiftieth psalm of King David is the prayer of his repentance. Three hundred contains the symbol of crucifixion. The letter Τ is the sign for three hundred, whence Ezekiel says "Mark THAV on the forehead of those who moan; and do not kill any marked with THAV." No one marked with the sign of the cross on his forehead can be struck by the devil; he is not able to efface this sign, only sin can. (Homilies 84)

After the deluge Noah drank and became drunk in his own house, and his thighs were uncovered and he was exposed in his nakedness. The elder brother came along and laughed; the younger, however, covered him up. All this is said in type of the Savior, for on the cross he had drunk of the passion: "Father, if it is possible, let this cup pass away from me." He drank and was inebriated, and his thighs were laid bare - the dishonor of the cross. The older brothers, the Jews, came along and laughed; the younger, the Gentiles, covered up his ignominy. (Homilies on Genesis 13)

One of Noah’s sons comes under a curse and Abraham’s descendents are troubled by Lot’s descendents, the Moabites. Yet even in these stories we find redemption. The descendents of Ham helped the Israelites escape from Egypt. Jethro, the Priest of Midian (a descendent of Ham through Keturah’s line) acted as an advisor to Moses. A Moabitess trusted God to care for her and Naomi in Bethlehem. There Ruth married Boaz and became the great grandmother of King David and ancestress of Messiah.

Notice the symmetry of a father-in-law and a mother-in-law. This is consistent with the complementary binary oppositions that frame the Afro-Asiatic worldview. We also find the theme of laughing Jews in the story of Sarah, a type of the Jewish people. To her was given the promise of a son. Initially, she laughed at the promise because she thought only in natural terms and she was beyond the age of child bearing. Then in her later days, she received the promised son and even insisted that he alone was to rule over his father’s territory. This is what happened to the Jews. They were given the promise of the Messiah, God’s Son, and they laughed at the promise. But later many came to believe in Him.
From this brief exploration of Jerome's exposition of Genesis, it is evident that he read the Scriptures on a deep level and detected the pattern that points us to Jesus Christ. The Church is richer for his work in translating the Bible into Latin, tirelessly comparing the versions available to him. May St. Jerome's memory be eternal!


All quotations are taken from Ancient Christian Commentary on Scripture, Volume I, Genesis 1-11. InterVarsity Press, 2001. Edited by Andrew Louth in collaboration with Marco Conti.