The ancient rulers named in Genesis controlled vast territories along major river routes. This was true for Terah, Abraham's father who was a descendant of Nimrod, the son of Kush (Gen. 10: 8). 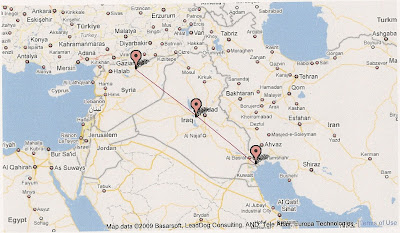 The map shows Terah's territory which extended from Haran [1] in southern Turkey to biblical Ur [2] in southern Iraq. The marker at the midpoint between Haran and Ur shows that Terah's route between his two wives corresponded to the Euphrates River and its lakes. In Terah's day the rivers and lakes were larger.

The location of biblical Ur has been the subject of interest through the centuries. St. Jerome suggests that Ur may represent a religious practice rather than a place. He wrote, "...in the Hebrew it has 'in ur Chesdim,' that is, 'in the fire of the Chaldeans.' Moreover the Hebrews, taking the opportunity afforded by this verse, hand on a story of this sort to the effect that Abraham was put into the fire because he refused to worship the fire, which the Chaldeans honor, and that he escaped through God's help and fled from the fire of idolatry."[3]

Here St. Jerome refers to a legendary episode based on midrash in which Abraham was thrown into the fire by order of King Nimrod. The legend is as anacronistic as the citing of Ur as a Chaldean population center in the time of Terah. Ur could not have been "of the Chaldeans" prior to the Neo-Babylonian empire in the seventh century B.C.

Josephus and Rabbi Maimonides believed that Ur Kaśdim was in Northern Mesopotamia, in what is today Syria or Turkey. Following their idea, various sites have been proposed as biblical Ur. One site is Urkish in modern Syria (37° 3′ 25″ N, 40° 59′ 50″ E37.056944, 40.997222 ). There are two problems with this location. First, Afro-Asiatic chiefs established their territories along waterways which they controlled, but there was no waterway running between Harran and Urkish. Second, as Urkish is almost directly east of Harran, this would mean that Terah set his two wives on an east-west axis, which is unlikely.[4]

Another site that has been proposed is Urartu. This is impossible since it isn't a specific site but a region of Armenia near Lake Van. The placement of wives in separate settlements, each with their own shrines, requires a specific site.

The third location is Urfa in modern Turkey (37° 9′ 0″ N, 38° 48′ 0″ E37.15, 38.8). This site is more likely than either of the first two proposed because it is about 40 miles north of Harran. This would mean that Terah's two wives were properly placed on a north-south axis. However, this indicates that Terah's territory was much smaller than seems likely. (Terah is the great Patriarch from whom all the principal figures of biblical history are descended.) Another problem is that the route between Harran and Urfa does not correspond to a waterway.

The most likely site is that proposed by the British archaeologist Charles Woolley in 1927. He identified biblical Ur Kaśdim with the Sumerian city of Ur in southern Mesopotamia, situated east of the present Euphrates river in Iraq (see map above). This site is the most likely as it fits the pattern of Afro-Asiatic chiefs maintaining their wives on a north-south axis corresponding to waterways. If this is biblical Ur, we must conclude that Terah was a very great chief indeed. His territory would have extended along the Euphrates River for about 800 miles. This explains why Terah's descendents - Nahor, Abraham, Lot, Isaac, Jacob, Esau and Joktan - were recognized as great chiefs also. 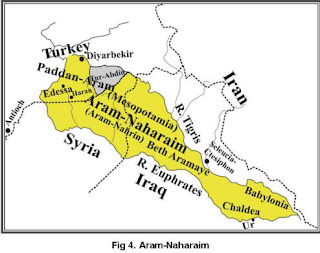 There is a tendency to think that people in Abraham's time didn't travel widely, but the Genesis material suggests that rulers traveled the length and breadth of their territories. Terah traveled between his 2 wives, one in Haran and the other in Ur, a distance of at least 730 miles. Abraham traveled about this distance from Haran to the shrine between Bethel and Ai, where he first settled in Canaan.

Abraham also set his wives on a north-south axis, with Sarah in Hebron and Keturah in Beersheba. This means that Abraham's territory corresponded to a system of rivers, lakes and wells as did the territory of his father and his ancestors Noah and Nok.

1. Haran means "crossroads" and suggests the existence of a shrine in the time of Terah.

2. Ur means "fire" and it appears in many place names in the area shown on the map. It probably refers to the fire altars that were common throughout the Afro-Asiatic Dominion. Archaeological evidence of such altars has been found in the Indus Valley culture dating from the proto-Harappan age (3500 BC- 2500 BC) to the Harappan age (2500 BC - 1750 BC). There was probably a fire altar in Jerusalem (a Jebusite city) in the time of Melchizedek. David built a fire altar at the threshing floor of Ornan the Jebusite. Elijah's offering, and Jezebel's false prophets, were consumed by fire from heaven on a fire altar.

4. The wives maintained separate households on a north-south axis. Their households marked the northern and southern boundaries of the chief’s territory. Sarah, Abraham’s sister bride, resided in Hebron and Keturah, Abraham’s cousin bride, resided in Beersheba, to the south. The wives were placed on a north-south axis rather than on an east-west axis because these chiefs did not presume to set themselves up as God, whose solar emblem moves from east to west.
Posted by Alice C. Linsley at 8:34 AM

"It is most likely that Terah and his family, including Abram, lived in Ur Kasdim, and not the Sumerian city of Ur."

I'm not sure about that.

Terah was a great Kushite ruler, like Nimrod before him. These rulers maintained 2 wives in separate households on a north-south axis. The wives' settlements marked the boundaries of the ruler's territory. If Terah controlled the length of the Euphrates, my bet is that the correct Ur is the one where the two great rivers meet.

I would like to thank you for clarifying your association of Ur Kasdim with Ur of Chaldea as being the same city located where the two rivers meet. It is quite possible that this may be the case, however, no one biblical scholar can agree on the exact location of Ur Kasdim. Most of them associate it with Ur of Chaldea, which, by the way, did not become a city of Chaldea until the 6th Century B.C. (Chaldean Dynasty - Babylonia - 626-539 B.C.). I do agree that Terah was a ruler of a vast area from Ur Kasdim to Haran, which took place years before the Chaldean Dynasty existed.

The page is very interesting, but the very first comment by the author is erroneous. It is incredible that no one has disputed it. It is even more incredible that this error has been verified as truth by at least one other person. Nimrod was descended from Ham (Genesis 10:6-8). Abram was descended from Shem (Genesis 11:10-26). while Abram is a "cousin" of Nimrod, he most certainly is not his direct descendant. And Terah was not a great Kushite ruler because he was never a Kushite to begin with.

Abraham's ancestors were Kushites. The lines of Ham and Shem intermarried exclusively.

The quote from Genesis 10:8, does not establish that Terah descended from Nimrod. I'm not sure why the author chose that; but the scripture clearly states that Terah and subsequently Abram descended from Noah's son Shem. Please see Genesis 10:10-26. This takes the line from Shem's son Arpachshad, who is listed earlier in this chapter. That is a rather huge mistake as the Messianic line descends from Shem through Abram !

Abraham's people were a caste and a culture trait of all castes is that they practice endogamy. The Horite clans intermarried exclusively. The lines of Cain and Seth intermarried, as did the lines of Ham and Shem. Abraham is therefore a descendant of both Ham and Shem. See this:
http://jandyongenesis.blogspot.com/2012/01/abraham-descendant-of-both-shem-and-ham.html

Ur of the Chaldeans must of existed in the time of Moses (as he is credited with the writing of Genesis) or have been added as clarification later on. I believe the first to be true as every great empire existed as a nation or people long before greatness. Thus, any city proposed as a possibility which was not part of Chaldean territory is completely erroneous.

The Tigris-Euphrates River Valley was under Kushite control long before Moses' time. Moses' Kushite wife was his half-sister. They had the same father - Amram - but different mothers.

Nimrod was the son of Kush. Nimrod ruled over Ur and Haran long before Moses.

As with some others, I kind of choked on the first line... However reading the comments I am even more curious about this statement...

"Moses' Kushite wife was his half-sister. They had the same father - Amram - but different mothers."...

It quite possible that I've missed it, but this is not something I have noticed in the Bible before... could you please explain how you've come to this conclusion?

Chris, this is the same pattern for all the Habiru (Hebrew) rulers. Abraham and Sarah were half-siblings. They had the same father, Terah, and different mothers. The half-sister wife was the wife of the ruler's youth. The second wife was usually a patrilineal cousin.

The marriage and ascendancy pattern of these ancient rulers is described here:
http://jandyongenesis.blogspot.com/2008/06/biblical-kinship-symmetrical-pattern.html

This data is taken from the Bible using kinship analysis, a tool of cultural anthropology.

Ok so I'm trying to understand how Nimrod is an ancestor or Terrah, and I could see how during this era, cousin married cousin (and sometimes half-sister). And I've read your article "The Lines of Ham and Shem Intermarried." Based on my research reading the King James version of Genesis 10 and 11, I still don't see any connection with Nimrod and Terrah.

So somewhere along Abram's line past Eber, Sheba the Younger intersects.

So how do you get Nimrod out of this?

I did a table to help me understand all this. Broke it down by generations from Noah (1, 2, 3, etc) if this could help.

Good work, David! It would be good if you had some training in kinship analysis so you would know how to set up the diagrams. I recommend Ernest L. Schusky's Manual For Kinship Analysis. Much easier to understand the marriage and ascendancy pattern of Abraham's ancestors when seen in diagram form. Lists like this are helpful up to a point.

To answer your question, see the diagram here:

Best wishes and keep up the good work!

So is the King James version wrong then where it shows "Arphaxad?" Where do you get the spelling of "Arpachshad" from?

When you study the Bible, use more than one version, side by side. You will see that there are variant spellings of most biblical names. Enosh/Enos is one example. The spelling depends on whether the Bible is based on the Greek Septuagint - Enos, in that case, or the Masoretic text - Enosh.

In the case of that particular ruler listed in Genesis 10, the spelling is Arphaxad (Septuagint - LXX) and Arpachshad (Masoretic MT).

where is it in the Bible that Abram had another wife in a another city? Clearly in Gen 11:29 says only Sarai. Then Sarai told him to take her maiden, Hagar, as wife. Definitely was not in anther city; as scripture is clear they were at odds living in the same place.

Hagar was a concubine, not a wife. Abraham's second wife was Keturah.