The Curse of Ham Falls Also on Shem


My botanist friend Ann recently wrote to me:

In my agricultural work in Africa, I met African Christians that believe they are cursed still because of the story of Noah and Ham. They are very sad. I was surprised to encounter that idea. God seems so active in Africa-- he has so many believers there! Surely the work of Christ liberates Africa too from that curse, --whether one believes it is literal or symbolic? Does your work give any insights about that?

The so-called "curse of Ham" has been used to justify racism by people who are ignorant of what Genesis tells us about fathers who curse their children out of anger, something that greatly displeases our Heavenly Father.

Noah, a man of the soil, proceeded to plant a vineyard. When he drank some of its wine, he became drunk and lay uncovered inside his tent. Ham, the father of Canaan, saw his father's nakedness and told his two brothers outside. But Shem and Japheth took a garment and laid it across their shoulders; then they walked in backward and covered their father's nakedness. Their faces were turned the other way so that they would not see their father's nakedness. When Noah awoke from his wine and found out what his youngest son had done to him, he said, "Cursed be Canaan! The lowest of slaves will he be to his brothers." He also said, "Blessed be the LORD, the God of Shem! May Canaan be the slave of Shem. May God extend the territory of Japheth; may Japheth live in the tents of Shem, and may Canaan be his slave. (Gen. 9:20-27)

To understand this in the proper biblical context we must investigate the pattern. In the following account, we find two themes: the anger of the father and the ranking of sons. We notice also that it is not Ham that is cursed, by Canaan. This supplies a clue as to when this story entered the biblical narrative. It comes from the later Deuteronomist Historian who is anxious to assert Shem's right over his brothers. 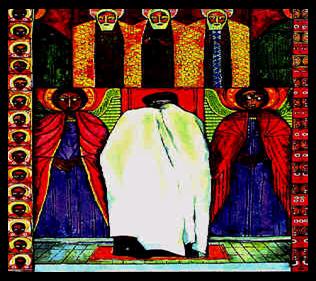 However, since the rulers of the lines of Ham and Shem intermarried, the curse of Ham would have to fall on Shem's descendants as well. In this sense, Noah’s curse falls upon both his Hamitic and Semitic descendants, which is what happens when a father acts out of self-loathing.

There are other interesting similarities as well. Noah was angry because his son Ham had looked upon his nakedness. Jacob was angry because his son Reuben has slept with his concubine. In both cases we find the idea of exposing the father's nakedness. Noah’s curse falls on Canaan, Ham’s son, which is a deflection of guilt. Jacob’s blessing of Joseph’s sons falls on the youngest, a deflection of blessing. The excuse given for Jacob’s behavior is that he was blind. The excuse given for Noah’s behavior is that he was drunk. (The theme of drunken fathers bringing disgrace upon their children is taken up here.)

Another parallel exists between the curse of Canaan and the curse of Cain (Gen. 4:11). Cain’s curse involves his being expelled from his homeland. The curse of Canaan is clearly intended to justify Israel’s conquest of the land of Canaan by the driving out of the inhabitants know as the Canaanites. Although it is clear that some Habiru/Hebrew married Canaanites. Rahab’s marriage to Salmon, of the tribe of Judah, is one example. More importantly, the Genesis genealogical information makes it clear that the descendants of Ham intermarried with the descendants of Shem. 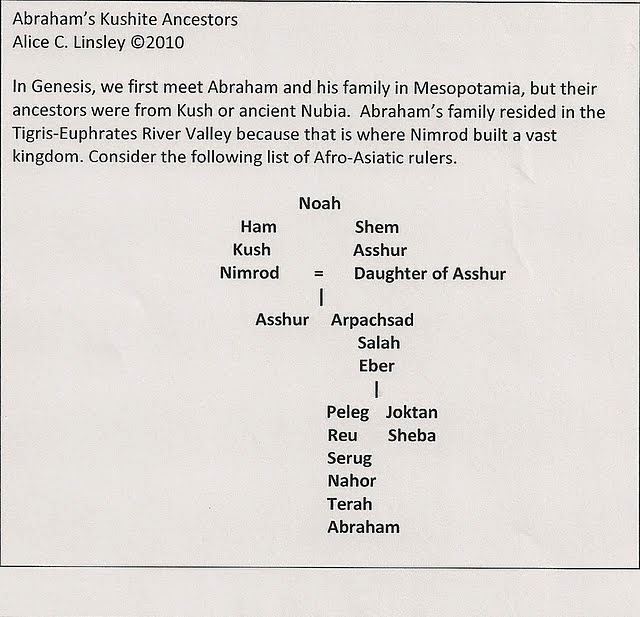 The fact that the lines of Ham and Shem intermarried underscores the stupidity of claiming the curse involves only black people of black. Further, we know today from molecular genetics that these peoples were diverse in their appearance, some having a red skin tone and waving dark hair, and some having a black skin tone with wooly hair.


There is no justification of racism in the book of Genesis. Race itself is a non-starter, anthropologically and genetically speaking. What people looked like has no bearing on their intelligence, their technological development, or their way of life. If a white person lives a simple country life, this is viewed by whites as "simplicity" but if black person chooses the same way of life, whites are likely to regard that person as lacking ambition.