When I was in seminary, my Old Testament professor told the class that he doubted Isaac’s existence because there is so little information about Isaac. He noted that the story of Isaac pretending that Rebecca was his sister parallels the story of Abraham asking Sarah to say that she is his sister. He concluded that Isaac is a literary construction reflecting the author’s love of doublets. Doublets are duplicate narratives of the same event believed by critics to be a single story told by two different sources.

My professor also noted the limited genealogical information about Isaac (Yitzak). He is presented as an only son after his half-brother Ishmael was sent away. Unlike his ancestors, Isaac is presented as having only one wife, Rebecca. She is his cousin. She is barren until God hears Isaac's prayers (another doublet) and she conceives twins: Esau and Jacob. Esau is the first born and in time, Jaccob is sent away.

While I appreciate this professor’s observations, I disagree with his conclusion. Isaac’s historicity can be verified by his adherence to the kinship pattern of his ancestors. Kinship patterns as complex as this are not found with fictional characters. Further, the kinship pattern of Abraham's people reveals a good deal of information about the principal figures of Genesis.

We note that after the binding of Isaac, Abraham and Isaac are found living in Beersheba and it was to Beersheba in the south (Gen. 24:62) that Abraham’s servant brought Rebecca to meet her betrothed. Beersheba was the settlement of Abraham’s wife Keturah. Had Isaac married a half-sister or a cousin other than Rebecca, he would have married someone from the line of Abraham by Keturah. The evidence points to him marrying a daughter of Yishbak. Yishbak was one of Abraham's sons by Keturah.

The evidence for Isaac’s other wife is rather hidden, as is the identity of Abraham’s mother. The final editors of Genesis wanted to preserve the claim of Isaac as the son of promise through whom Israel would claim the Land. It wouldn’t do to admit that Isaac had other children by an Arabian wife of the house of Sheba, or that Abraham’s mother was Canaanite. Yet the kinship pattern of Genesis provides the essential information to draw these conclusions and to justify them on the basis of the text alone.

It is likely that Isaac had other sons and daughters besides Jacob and Esau. It is possible to trace them through the cousin bride’s naming prerogative. Rebecca’s father was Bethuel (Gen. 22:23), a son of Na’Hor, Abraham’s brother. Why didn’t she name her first-born son Bethuel after her father? This is the pattern for those who were to rule. We are given this explanation: Jacob grasped his twin brother’s heel as he was born (Gen. 25:26) “so his name was called Jacob.” It is also possible that Rebecca didn’t name her first-born son after Bethuel because this son was not the one who would rule after Isaac’s death.

Rebecca is central to Isaac’s claim as the heir to Abraham’s territory and to the divine promises, yet she doesn’t name her first-born son after her father, as was the common practice for sons who were to be rulers. This suggests that Isaac had another first-born son by another wife.

How do we track Isaac’s first-born by his other wife? We must look for the hidden third son, which involves looking for linguistic similarity as in the case of Og, Magog and Gog. When we do this, we find three sons of Abraham: Yitzak (Isaac) by Sarah; Yishmael (Ishmael) by Hagar, and Yishbak (Ishbak) by Keturah. We note the parallel names Yish and Yitz, which recall the 3-son confederations of the ancient Kushite rulers. [1]

Yishbak the elder would have had a grandson name Yishbak. This younger Yishbak is the first-born of Isaac by a daughter of Yishbak. She named their first-born son Yishbak after her father, according to the naming prerogative of the cousin bride. 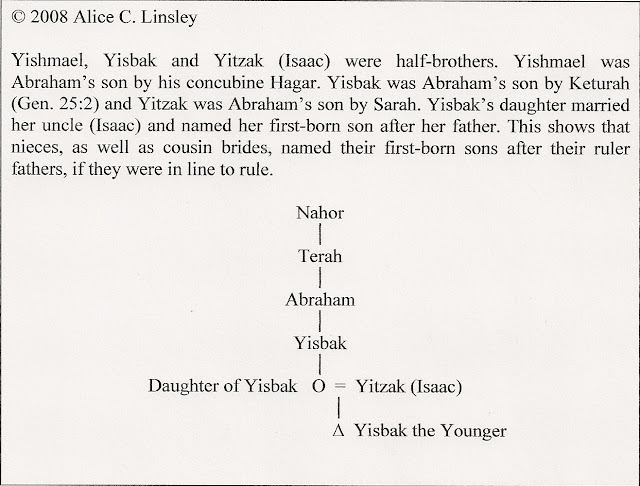 Yishbak’s name means he will leave. He is likely one of the sons to whom Abraham gave gifts before sending them away to the east (Gen. 25:6). Yishbak’s descendants lived in the lands to the east of Canaan. Assyriologist Friedrich Delitzsch identified the name Ishbak with Iasbuk found on cuneiform inscriptions from a land whose king was allied with Sangara of Gargamis (Carchemish) against Assur-nazir-pal and Shalmaneser II (c. 859 B.C.). This Ishbak or Yisbak was likely a descendant of Abraham and Isaac.
It is fairly safe to conclude that Isaac had at least three sons and their names were: Jacob, Esau and Yishbak, the last being named by the cousin bride after her father, according to the cousin bride's naming prerogative. All three appear to have been rulers over their own territories.

This pattern is like that of the Kushite rulers. The Kushite ruler Piye united Nubia and Egypt and established the 25th Dynasty. Before his death, Piye divided his kingdom between his 3 first-born sons, whose names are linguistically similar. Sheba-qo ruled in Thebes, Shebit-qo ruled in Napata, and Ta-har-qo ruled in Memphis. Shebaqo revived the office of high priest, which he awarded to his son Hori-makhet who was high priest in Thebes.
Posted by Alice C. Linsley at 4:59 PM

I just discovered this blog a few days ago, hence I did not see this post until today. Sorry to be commenting on old material, but that's the reason.

Anyway, I'm afraid the argument in favor of Isaac having a second wife does not strike me as convincing, or even a valid argument. All that has been proven is that IF Isaac had a second wife, THEN she would have to have been of a certain ancestry and given her son a certain name. However, the original question, as to whether Isaac actually had another wife besides Rebecca, has not been established.

I hope these comments prove helpful!

Yes, this is not proof of Isaac having 2 wives, but it is evidence that suggests he did.

It focuses the question of why Isaac would NOT have 2 wives since it was the pattern of the ruling sons to do so. Maybe Isaac wasn't the ruling son?

I tend to accept the biblical claim that Abraham made Isaac the ruler over his territory before he died. If true, this explains Abraham's urgency for Isaac to have a second bride, preliminary to his becoming the next chief. It also explains why Rebecca was brought to Beersheba instead of to Hebron.

Hi, Susan. That is possible. Jacob had two cousin wives, but Jacob's marriage appears to have been irregular and he was not Isaac's proper heir. That was Esau. Esau or Yeshu was indeed a great Horite ruler whose marriage pattern corresponds exactly to the Horite ruler-priest pattern. This is Esau the Elder, a contemporary of Seir the Horite of Edom. See http://jandyongenesis.blogspot.com/2010/02/two-named-esau.html

There are two possibilities concerning Issac's first wife. Either she was a half-sister (daughter born of Keturah) or a patrilineal niece (born of the wife of one of his brothers). In the second case, Yitbak would be my educated guess.

Cousin brides and niece brides were common among the Horites. Neither would have been regarded as irregular. There is some indication that both were classified as "cousins" which followed the practice of the Egyptians royalty.

I now lean toward the view that Isaac's first wife was a half-sister, given Isaac's status as Abraham's proper heir. The pattern of first wife (half-sister) and second wife(patrilineal cousin/niece) appears to apply to Isaac.

Very helpful. Thank you for answering. And thank you for sharing so much of your research with us here online. I'm finding it fascinating to read and ponder. Susan

I'm having doubts about my thinking in this article. I'm beginning to look in another direction for data concerning Isaac's first born son by his half-sister wife. This son was Isaac's proper heir and would have ruled over Edom when Isaac died. I'm beginning to think that his proper heir was Seir the Horite (Genesis 36).

Abraham's son Isaac was likely much younger than Nahor's first born son Huz. This is the son of Milcah (Gen. 23:20-24). Huz had a brother named Buz. Huz/Buz and Uz ae a 3-clan Horite confederation. Nahor's other so was Kemuel. He is associated with the Horite city of Hebron in 1 Chronicles 26:30 and 1 Chronicles 27:17. Uz's daughter married Dishan and named her first born son Uz after her father. Uz the Younger is listed in Genesis 36 as a chief of the Horite clan of Seir, the ruler of Edom. This would make Seir the age that he would have been born to Isaac and his first wife, his half-sister.

I found this because I was curious about how, when Isaac and Esau discover Jacob's theft of the blessing, Isaac says to Esau, "I made him a master over you, and I gave him all his brothers as servants". Made me wonder if Isaac had other children, perhaps through concubines, who may not have rated as highly as Esau and Jacob did in the hierarchy of the culture of that place and time.

Rhona, you are asking good questions.

I recommend reading this short piece: