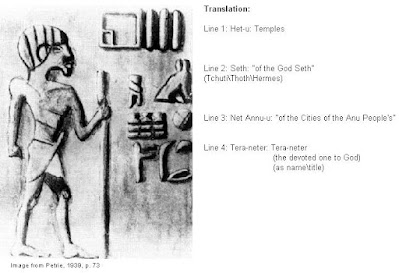 Abraham's father was Terah. Terah is an ancient word meaning "priest" among the Nilotic Hebrew. Terah was a descendant of Nimrod, a Kushite kingdom builder.

The tile above shows a Tera (priest) of the Sethite Hebrew (a moiety) who served at a temple in a city of the Anu. The Tera-neter tile was found by British Egyptologist W.M. Flinders Petrie (1853-1942) in the early temple at Abydos underneath the dynastic temple.

The figure has the drooped chin of the same type seen in the ivory king from Abydos, and the Scorpion king of Nekhen, the oldest known site of Horite Hebrew worship.

Keeping with the custom of his Hebrew ancestors, the ruler-priest Terah had two wives. One wife was the mother of Nahor and Abraham, and the second wife was the mother of Haran and Sarah. Nahor was Terah's proper heir. Abraham was a sent-away son. Haran's mother was a cousin bride as is evident by the cousin bride's naming prerogative. She named her first-born son Haran after her father, the chief of Haran, shown on this map. 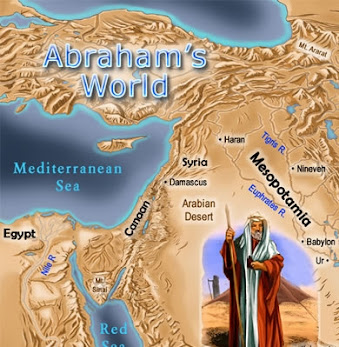 Haran is shown on this map.

The first-born son of the cousin bride was not his father's proper heir. He was to serve as a high official in the territory of his maternal grandfather after whom he was named. Haran's death in Ur suggests that he was not yet serving in that capacity. Haran probably died at a fairly young age. He had only one son, Lot.

Terah's proper heir was Nahor, the first-born of his principal wife who was a half sister. They had the same father but different mothers. This was also the case with Abraham and Sarah (Gen. 20:12).

Terah took Abraham, Sarah, and Lot from Ur to Haran where Terah died. Nahor assumed control of Terah's considerable holdings in the territory designated as Paddan-Aram on this map. 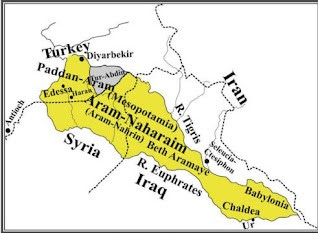 Paddan Aram designates the region of Harran in upper Mesopotamia. "Paddan Aram" and "Haran" relate to the Akkadian words paddanū and harranū meaning "road" or "caravan route." This gives a sense of the prosperity enjoyed by Nahor who, as regional chief, would have controlled commerce in and through his territory.
Nahor's high status is also indicated by his Horus title. Na'Hor is a Horus title that ran in the family. Terah's father was Na'Hor also. In Akkadian, "na" is a modal prefix indicating service to, affirmation, or affiliation. The name Na'Hor would indicate a servant of HR (Horus), further evidence that Terah and his sons were Horite Hebrew rulers.
After Nahor assumed control of their father's territory, Abraham received gifts and was sent away from Paddan-Aram. This constituted his call by which God would establish him in a territory of his own. Abraham adhered to the same custom. Before he died, he gave gifts to the sons of his concubines and sent them away from Isaac his heir (Gen. 25:6).

Abraham speaks of Paddan-Aram as his "own country" in Genesis 24:4. He sent his servant there to fetch a cousin bride for his heir Isaac. If Isaac upheld the marriage and ascendancy pattern of his Hebrew ancestors, she would have been a cousin bride. Rebekah was indeed his patrilineal cousin.

Yes, I see a connection with TER which is a series of rituals around wife inheritance among the Luo. JA TER is the man who carries it OUT. It is possible that these rituals were priestly activities in ancient times.

Excellent observation. Thanks, John! Your knowledge has helped so much with this research.

Thanks! This is awesome.