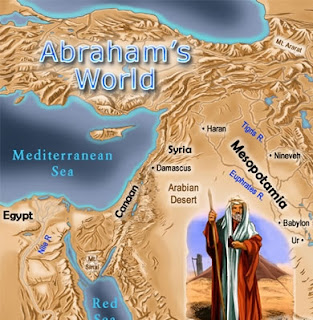 Haran and Ur are shown on this map.

Abraham's father Terah maintained two wives in separate households. One resided in Ur of Chaldea (modern Iraq) and the other resided in Haran (modern Turkey). The rulers of Abraham's people marked their northern and southern boundaries by the placement of their wives. Abraham did this also. Sarah resided in Hebron and Keturah resided in Beersheba to the south. (Both Hebron and Beersheba were in the territory that the Greeks called Idumea, which is Edom, the land of red people.) 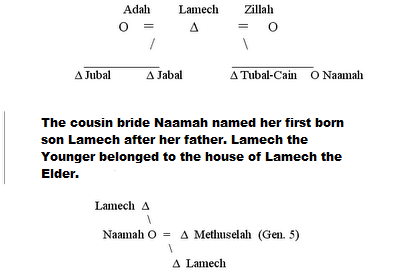 The Horite Hebrew rulers did not place their wives on an east-west axis because that would be to claim equality with God. The solar arc symbolized God's daily route as Sovereign over the Earth from the rising to the setting of the sun. There is a subtle criticism of Lamech the Elder (Gen. 4) whose two wives apparently lived in settlements on an east-west axis. As the Hebrew scholar Theodor Gaster noted, their names Adah and Zillah indicate dawn and dust. This rounds out the picture of Lamech's arrogance, for besides boasting of killing a man, he set himself as an equal to God.

Evidently, Terah was a powerful ruler. His territory was the fertile land between the rivers Tigris and Euphrates. His son Nahor ruled after Terah died in Haran (Gen. 11:32). Nahor was Abraham's older brother and Terah's propre heir. Na'Hor is a Horus title that ran in the family. Terah's father was Na'Hor also.

In Akkadian, "na" is a modal prefix indicating service to, affirmation, or affiliation. The name Na-Hor would then indicate a servant of Horus; further evidence that Terah and his sons were Horite Hebrew rulers.

Nahor's sons were Uz, Buz, Kemuel, Chesed, Hazo, Pildash, Jidlaph and Bethuel. Job was of the clan of Uz. Nahor also had children by a concubine named Reumah. Their names were Tebah, Gaham, Tahash, and Maacah (Gen. 22:20-24). The name "Tahash" refers to tanners and leather workers. A stronghold called Aram-Maacah is mentioned as an ally to the late Bronze Age strongholds of Aram Naharaim and Zobah in 1 Chronicles 19:6. 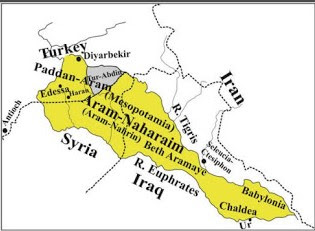 According to the marriage and ascendancy pattern of the Horite Hebrew, Abraham would have received gifts from his father before Terah died. These were provisions for Abraham's departure as a "sent-away" son. Abraham did the same for the sons of his concubines (Gen. 25:6). Sent-away sons were to seek territories of their own away from their father's proper heir. The sending forth of Abraham constitutes a divine call and appointment. It means that a kingdom will be gained, not according to worldly means, but as God directs. Sent-away sons receive divine protection, guidance, territory, authority, and heirs. This pattern is found with Cain, Abraham, Moses, Yacob, Yoseph, Samuel, and David. 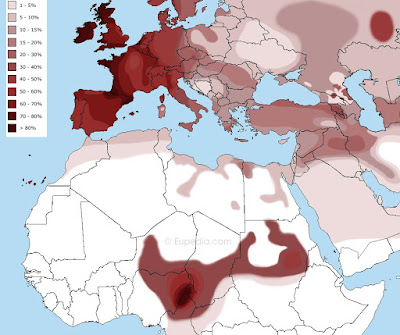 The right of rule was bestowed on the first-born son of the principal wife. The principal wife was the bride of the man's youth and a half-sister, as was Sarah to Abraham. Inheritance grants were given to the sons of concubines. Abraham gave grants to the sons of his concubines Hagar and Masek and sent the sons away from the territory of his proper heir, Isaac (Gen. 25:6).

Many heroes of the Bible are men who left their homes and relied on God for provision of their own territories. This practice of sending away sons drove the expansion of the early Hebrew into new territories. It explains why the Horite Hebrew are found dispersed among the peoples of Y-DNA Haplogroup R (shown on map above).

Related reading: The Wives' Settlements Marked Boundaries; The Calling of Abraham; Solar Symbolism Among the R1 Peoples; The Marriage and Ascendancy Pattern of Abraham's People; The Chiefs of Edom; Hebrew Rulers with Two Wives

I have been watching your blog for a while and I can say that you are right on many things, however, I have some arguments:

Chris, I encourage you to join the international Facebook group The Bible and Anthropology where we discuss these topics. I believe you will find it helpful.

Hurrian, Hur, Horite and Horim share the same root HR, which is an ancient Egyptian word that means Most High One. It is applied to God Father and God Son.

The Edomite rulers listed in Genesis 36 were Horite Hebrew. That means they believed in God Father and God son. The son was called "Horus" among the Nilotes and "Enki" among the Akkadian speakers of Mesopotamia. Genesis 36:31 says that the Horite rulers of Edom ruled before there was ever a king in Israel.

The oldest known site of Horite Hebrew worship is at Nekhen on the Nile (3800 BC).

The Vedic texts are useful to study for anthropologically significant data, but they are not as old as the oldest material in Genesis.

Thanks for asking great questions! Again, we discuss these matters in greater depth at the Facebook group.