The Bosom of Abraham


The idea of a place reserved for the righteous dead is very ancient. The concept stands behind the phrase "Bosom of Abraham," a place or state of existence where the righteous dead await the Day of Judgment. The expression is found only in two verses of the Bible, both from St. Luke's parable of the Rich Man and Lazarus (Luke 16:19-31). However, the concept appears in Jewish writings, though not all rabbis believe that there will be a bodily resurrection. Adda bar Ahaba, a third-century rabbi, is said to be "sitting in the bosom of Abraham" and this is interpreted as already being in Paradise.

Gehenna and the Bosom of Abraham strike a contrast between the peaceful repose of the righteous and the tormented repose of the unrighteous. In the Bible, this time of repose is not infinite. It lasts only until the day of Judgment when the righteous and the unrighteous, both the living and the dead, will stand before the Throne of God. Some will enter into the Paraside of the eternal Kingdom. Some will go to the second death from which there is no rising.

The Egyptians believed in the second death and prayed for, offered sacrifice for and prepared the bodies of their dead in the hope that they might rise to life.

Saint Augustine , a North African bishop, wrote "that the Egyptians alone believe in the resurrection, as they carefully preserved their dead bodies." ("Death, burial, and rebirth in the religions of antiquity", Jon Davies, Routledge, 1999, p. 27)

The Kushite and Egyptian rulers built thousands of tombs and funerary pyramids. Some of these are buried under the shifting sands, but 17 were recently identified using satellite technology. Egyptian archaeologists also recently discovered a 4400-year-old tomb, south of the cemetery of the pyramid builders at Giza, Egypt. The Egyptian Minister of Culture, Farouk Hosny, said the ancient tomb belonged to a priest named Rudj-Ka (or Rwd-Ka), and is dated to the 5th Dynasty - between 2465 and 2323 BC. Dr. Zahi Hawass said that Rudj-Ka had several titles and would have been an important member of the ancient Egyptian court.

The ancient Egyptians were concerned about the afterlife because they believed the soul or "Ba" to be eternal. Ba is sometimes depicted as a human-headed bird flying out of the tomb to join with the 'Ka' in the afterlife. 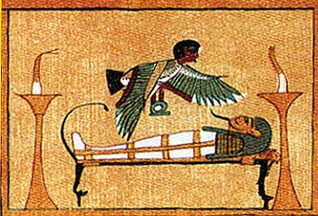 The unification of Ba and Ka after death was the reason for mummification. Dying the second death meant not becoming an "akh."  Only as an akh could one enjoy the resurrection life. The ankh for the ancient Egyptians was the hieroglyphic sign of life. It is symbolic of the Sun's daily course from east to west, with the loop representing the Sun.

The horizontal crossbar symbolizes the path of the sun from east to west. To put this in terms more familiar to Christians, life is possible where the Sun, the Creator's emblem, sheds light and warmth.  The ancient Egyptians believed that these elements - Ka, Ba and Ankh - became separated at death.  By mummification, with prayers and sacrifices, they attempted to keep the KaBa together and prepared to receive the resurrection of Ankh at some future time.

The phrase  "Abraham, Isaac, and Jacob" is a formulaic expression for the righteous ancestors who in death enjoy the peace of God and await the Day of the Lord. The "bosom of Abraham" is shorthand for the repose of those who put their trust in Yeshua, the Son of God, the Christ anticipated by Abraham's Horite people.

The Horites actually believed the protevangelion (Gen 3:15) that the Son of God would be born of their bloodline. This is the meaning of Hebrews 11, and this is why John the Forerunner identifies his cousin as the "Son of God" at the ancient Egyptian river shrine of Nim-rah (the waters of God). The expectation of the Son's coming is associated with Abraham and it is in this faith, hidden in Abraham's bosom, that all the faithful departed rest.

Jesus alluded to the Nilotic myth of Horus when he spoke to this disciples about his passion.  He said, “Now the hour has come for the Son of Man to be glorified. In all truth I tell you, unless a wheat grain falls into the earth and dies, it remains only a single grain, but if it dies it yields a rich harvest.” (John 12:23, 24)

This is an explicit reference to the Nilotic myth concerning Osirus, who is said to “be one” with his son Horus. Abraham’s Horite people were devotees of Horus. They were ethnically Kushite and the oldest known centers of Horus worship have been found in ancient Kush (Sudan and the Upper Nile Valley).

The Kushites and Egyptians observed the death of Horus (Osirus) in a 5-day festival. The first 3 days were marked by solemnity (as Plutarch noted in Isis and Osiris, 69). The last 2 days were a time of feasting and rejoicing. Horus is said to have died on the 17th of Athyr. His death was commemorated by the planting of grain. On the third day, the 19th of Athyr, there was a celebration of Horus’ rising to life. It is no coincidence that Jesus alludes to the ancient Horite myth when describing his passion and resurrection. He is a direct descendant of the Horite ruler-priests lines which exclusively intermarried and he was born in Bethlehem of Judah, in the ruler-priest line of Matthew (Mattai/Mattan). This was the line of Joseph of Hari-mathea, a voting member of the Sanhedrin. He and Nicodemus, a fellow member of the Sanhedrin, buried Jesus’ body. They knew from first-hand experience that Jesus was dead and they clearly believed that He rose from the grave. Probably they, along with other disciples, had seen the Risen Lord. Christian Tradition holds that they became witnesses to the Resurrection.


Related reading:  Who Were the Horites?; The Christ in Nilotic Mythology; Nimrod and the Baptism of Jesus
Posted by Alice C. Linsley at 2:30 AM

In your view, is the Bosom of Abraham a state of repose or a place of repose? Or both?

Also, I take it that you find that the name "Bosom of Abraham" is a reference to the faith that was held and represented by Abraham? IOW, not a reference to the physical Abraham (the man). Am I understanding what you're saying correctly?

A blessed state or repose.

Abraham is the father of our Faith. We who are not of the Horite blood line of ruler-priests are grafted into his lineage through Jesus Christ.