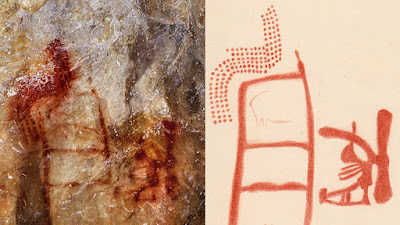 The term "Neanderthal" has taken the connotations of a hairy, toothy ape-like creature. This is far from the reality. Homo neanderthalenis is the term coined in 1863 by the Irish anatomist William Kin. This human population was named after the Neander Valley in Germany where the first skeletal remains were discovered. The bones of the original Neandertal from the Neander Valley are well within the range of modern human anatomy.

The Neanderthals began to spread across Europe and Asia around 400,000 years ago.

The oldest human fossils are millions of years older than the Neanderthal fossils. The archaic humans walked upright, had opposing thumbs, short fingers, human ankle bones, and human dentition. In humans, the back teeth are larger than the front teeth (not so with apes), and the canines are not pointed. Humans also lack the characteristic diastema, or tooth gap, found in apes.

When Jeremy DeSilva, a British anthropologist, compared the ankle joint, the tibia and the talus fossils of human ancestors ("hominins") between 4.12 million to 1.53 million years old, he discovered that all of the ankle joints resembled those of modern humans rather than those of apes. Chimpanzees flex their ankles 45 degrees from normal resting position. This makes it possible for apes to climb trees with great ease. While walking, humans flex their ankles a maximum of 20 degrees. The human ankle bones are quite distinct from those of apes.

The discovery of a complete fourth metatarsal of A. afarensis at Hadar that shows the deep, flat base and tarsal facets that "imply that its midfoot had no ape-like midtarsal break. These features show that the A. afarensis foot was functionally like that of modern humans." (Carol Ward, William H. Kimbel, Donald C. Johanson, Feb. 2011) The Ward, Kimbel and Johanson study is very interesting. Donald Johanson was the person who announced to the world that Lucy was "ape of the South," or Australopithecus. He has since reconsidered that assessment.

The Neanderthals are posed as a recent stage of evolution from ape-like hominids to modern humans, but there is no evidence to support this theory. In fact, the evidence indicates that the Neanderthals were our European and Near Eastern ancestors. They were hardy and well-adapted to the challenging environmental conditions of their time.

The sequencing of the Neanderthal genome reveals that Neanderthals and modern humans are virtually identical. Here's the report:

It took four years for Pääbo’s team to assemble a working sequence from DNA in the bones of three 38,000-year-old Neanderthal women, found in Croatia’s Vindija Cave. The sequence, published May 6 in Science, covers about 60 percent of the entire genome.

Neanderthal humans walked upright, had human dentition, opposing thumbs, hunted in groups, fabricated artistic articles such as jewelry, performed religious ceremonies, ritually buried their dead (usually in red ochre), were organized in clans with leaders, made tools, built shelters, and controlled fire. They used carbon and red ochre to paint the walls of their rock shelters. See the paintings above, found in La Pasiega rock shelter in northern Spain. The ladder shape dates to at least 64,000 years and is the work of Neanderthals.

By every indicator, Neanderthals were fully human, and most modern humans have Neanderthal ancestry. Indigenous sub-Saharan Africans have little to no Neanderthal DNA because their ancestors did not migrate through Eurasia.

Holloway (1985: 320) has stated "I believe the Neanderthal brain was fully Homo, with no essential differences in its organization compared to our own."

Neanderthal anatomy is identical to humans: same number of bones which function in the same manner (Trinkaus and Shipman, 1992).

But that's not the idea at all - most scientists believe they were a parallel evolutionary hominid branch. Of course dna will give a more precise picture.

So in other words, Neanderthals and Homo Sapiens are related to one another the way I am related to black people or some such thing?

If that's the case, it seems as though one ought to eliminate any separate category on the species level.

Yes, Ed. We are the same species and not separate, as proposed by macro-evolutionary theory. Neanderthals are far from the oldest humans. The oldest human fossils are millions of years old, but generally not categorized as such. The labels applied to different fossils represent attempts to force the evidence into a Darwinian framework. Ignore the labels and look at the evidence. The bulk of the fossils in question fall into 2 categories: apes or humans, but nothing in between.