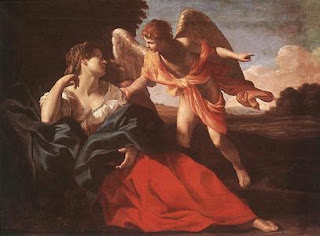 Painting of Hagar in the wilderness by Giovanni Lanfranco. It hangs in the Musée du Louvre.

Hagar was the Egyptian handmaiden to Sarah, Abraham’s sister wife. She was also one of Abraham’s concubines. Though she is presented as a downtrodden slave, it is likely that Hagar was highly cultured and moved comfortably in the circle of nobles.

Genesis portrays Hagar as having a complex personality. In later life she is a strong and independent woman, contracting marriage for her son and apparently producing other offspring known as the Hagarites. They are mentioned in Psalm 83:6. The core of this psalm is believed to pre-date David. The Hagarites are distinct from the Ishmaelites in the Psalm 83 listing of allies, so it is apparent that Hagar (like Anah and Oholibamah) was regarded as a clan chief.

This picture of Hagar as a mature clan chief differs from the picture presented in Genesis 16:5 where we are told that Hagar acted tactlessly toward her childless mistress. Sarah blamed Abraham for this and Abraham said to Sarah: “Your slave-girl is at your disposal. Treat her as you think fit” (Genesis 16:6). Sarah then abused Hagar who fled to a spring where Abraham had lived for a time (Genesis 20:1). The Angel of the Lord found her at the spring and prophesied concerning her son that his name should be Ishmael meaning God Hearkens, for God heard the cry of Hagar's affliction. 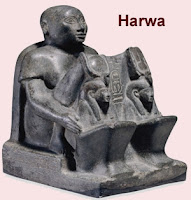 This story portrays Hagar as a tactless, abused runaway, but note how she has a personal encounter with the Lord at the water shrine! She knows that she has encountered the all-Seeing God because she declares that she has gone on seeing, even as she is seen (Genesis 16:14). The Angel of the Lord speaks in the first-person, and in verse 13 Hagar identifies the visitor as God. To me, this sounds like a conversion story.

Given the times in which Hagar lived, she would have run to a place where she felt she could provide for her son. She traveled to a shrine half way between Kadesh and Bered (Genesis 16:14). In Genesis, when a water system is identified as being along a road between two towns, it is a shrine to which a priest is attached. It is likely that Hagar had family there. Since this was Horite Hebrew territory, an Egyptian priest (Harwa) at a water shrine would have been a Horite priest. 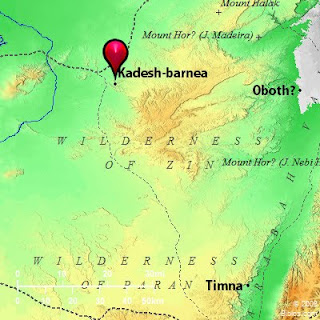 A temple dedicated to Hathor, the mother of Horus was discovered at the southwestern edge of Mt. Timna by Professor Beno Rothenberg of Hebrew University. This is the site of some of the world's oldest copper mines.

Horite priests were devotees of Horus, who was called “Son of God.” From ancient Egyptian texts we gather that Horus is equal to the Father in nature and glory. The Ancient Egyptian Coffin Texts and Pyramid Texts provide a great deal of information about Horus, the divine son of Ra. This is expressed in the Ancient Egyptian Pyramid Texts. In the priest's prayer to the King, he says, "Horus is a soul and he recognizes his Father in you..." (Utterance 423).

In these texts Horus is described as the one who unites the peoples (the Upper and Lower Nile). This is symbolized by the double crown. The rulers of the two regions wore different crowns, but Horus was called "Horus of the Two Crowns" because he wore both. This is what stands behind the account of Yeshua/Joshua, the priest, receiving the "crowns" in Zechariah 6:11: "Take the silver and gold, and make crowns, and set it upon the head of Joshua the son of Jehozadak, the high priest..."

A reference to the third day resurrection is found in the Pyramid Texts: "Oh Horus, this hour of the morning, of this third day is come, when thou surely passeth on to heaven, together with the stars, the imperishable stars." (Utterance 667)

Consider how Horus describes himself in the Coffin Texts (148):


I am Horus, the great Falcon upon the ramparts of the house of him of the hidden name. My flight has reached the horizon. I have passed by the gods of Nut. I have gone further than the gods of old. Even the most ancient bird could not equal my very first flight. I have removed my place beyond the powers of Set, the foe of my father Osiris. No other god could do what I have done. I have brought the ways of eternity to the twilight of the morning. I am unique in my flight. My wrath will be turned against the enemy of my father Osiris and I will put him beneath my feet in my name of ‘Red Cloak’.


This text is about 1000 years older than the words of Psalm 110:1, a clear messianic reference: The Lord says to my Lord: “Sit at My right hand until I make your enemies a footstool for your feet."

Horus was expected to trample down the serpent. This expectation is expressed int he Pyramid Texts:
"Horus has shattered (tbb, crushed) the mouth of the serpent with the sole of his foot (tbw)" Utterance 388 (681).

This reference dates to about 800 years before Psalm 91: ""They will bear you up in their hands, That you do not strike your foot against a stone. You will tread upon the lion and cobra, The young lion and the serpent you will trample down."

Horus gives himself as mystic food of immortality. In The Pyramid Texts, dating from the beginning of the 4th Dynasty, we read: "O Hunger, do not come for me; go to the Abyss, depart to the flood! I am satisfied, I am not hungry because of this kmhw-bread of Horus which I have eaten." (Utterance 338) The Egyptian word km means to bring to an end, to complete, or fulfill, and hw refers to the heavenly temple or mansion of the firmament above.

It appears that the "kmhw-bread of Horus" is what the Church Fathers call "the bread of immortality." Concerning himself, Jesus said that "unless you eat the flesh of the Son of Man and drink his blood, you have no life in you. Whoever feeds on my flesh and drinks my blood has eternal life, and I will raise him up on the last day" (John 6:53-54).

These are key elements of the Messianic Faith by which Messiah is identified.

Jesus Messiah is sometimes called “the Angel of the Lord.” Perhaps he met Hagar’s when she fled to the Horite shrine. Might Hagar's conversion be due to a personal encounter with the pre-incarnate Christ?

This is how some Church Fathers see Hagar's visitation. He who is of one essence with the Father, “for in Him dwelleth all the fullness of the Godhead bodily” (Col. 2:9) came into the world to save sinners like Hagar... like me.

Hi Alice, I was just reading this on Peaceful Science

You said, "Enoch the Elder would have been a contemporary of Adam." I don't think you are an evolutionist (neither am I), but you believe the region was populated by the time Adam and Eve exited the Garden. I have an idea that these people were actually descendants of Adam and Eve. In Ezekiel 31 there are references to the Garden of God and the trees of Eden as nations.

What do you think of the idea that Adam and Eve may have had many offspring in the Garden and that as they sinned or rather the heads of people groups sinned, God kicked them out of the Garden. Lastly, and perhaps thousands of years later, Adam and Eve sinned and were likewise expelled from the Garden? Can you comment on that possibility?

The biblical description of Eden is as a vast well-watered garden that extended from the source of the Nile in Ethiopia's highland where the waters part forming a V (Ha'Vilah) to the Tigris and Euphrates. This is the cradle of humans and the oldest human fossils have been found in East Africa.

The historical Adam and Eve are posed in Genesis as the parents of Cain and Seth who were late Neolithic rulers who built cities, had musical instruments, worked stone and metal, etc.

The mythological Adam and Eve are posed as the first humans. This is consistent with the African origin stories. Among the Gikuyu, the first man and women were called Gikuyu and Mumbi. On closer examination, it is clear that these are not the first humans of all humanity, but the founders of the Gikuyu people. Likewise, Adam and Eve are the founders of the clans that come to be identified as Horite Hebrew in the Bible.