Lucy and her kin lived about 3.4 million years ago.  It appears that Mary Leakey suspected that these were archaic humans after her work in Ethiopia. She certainly had reason to think so after her 1979 discoveries in Tanzania. That was the year that Mary discovered the earliest known footprints of hominids, animals and birds at Laetoli. The footprints were preserved about 3.6 million years ago under falling ash from the nearby Sadiman volcano. The raised arch and rounded heel of the footprints showed that these creatures walked as humans today.

Unfortunately, Lucy and her kin were given the name "Australopithicus" (meaning ape of the south) by Donald C. Johanson, though Mary Leakey would have called the finds Homo, as she thought they were. She expressed her regret that "the Laetoli fellow is now doomed to be called Australopithecus afarensis," a name contrary to the evidence that Lucy and her people walked upright, had oppositional thumbs, short fingers, human dentition, built fire, shared their food, and used flints to scrap, saw and chop.

Now there is evidence that Lucy and her kin butchered meat. Read the NYT story here. If true, this pushes back the use of butchering flints in the same region from 2.6 to 3.4 million years ago.

Here is the gist of this recent report: "stone-tool-inflicted marks on bones found during recent survey work in Dikika, Ethiopia, a research area close to Gona and Bouri. On the basis of low-power microscopic and environmental scanning electron microscope observations, these bones show unambiguous stone-tool cut marks for flesh removal and percussion marks for marrow access.” On page 11 of the supplementary materials, it states that microscopic stone fragments were found in the cut marks.

There are actually 2 fossilized bones with what appear to be marks made by stone tools. 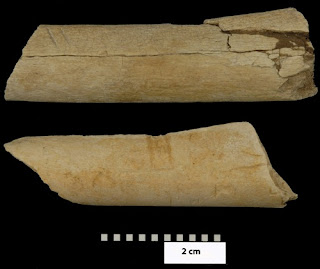 David DeGusta, Founder of Paleoanthropology Institute in Oakland, California, compared the markings published in Nature with images from Njau and Blumenchine (2006) paper titled, “A diagnosis of crocodile feeding traces on larger mammal bone, with fossil examples from the Plio-Pleistocene Olduvai Basin, Tanzania.”  Here are the images. What do you think? 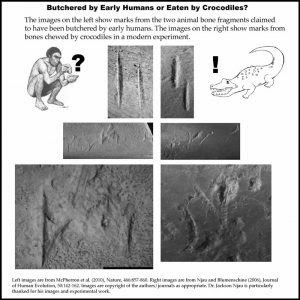 The stone tools marks are more V shaped and smooth, while the marks left by crocodile teeth are more rounded and pitted. Still, the marks must be evaluated in light of the larger archaeological picture of ancient humans in Africa, so let's compare the marks (dated about 3.9 million years) at the left with the marks made on this 75,000 stone from the Blombos Cave in southern Africa:

A close-up look shows that the markings are organized in a geometric pattern.  This is symbolic work whereas the marks on the animal bone are utilitarian. Yet the marks on both the stone and the bone suggest reasoning and deliberate controlled motion. Crocodile victims thrash about until they are dragged under the water. The deeper more rounded marks left by crocodile teeth suggest a more violent motion.

Donald Johanson said, "There is no question that the announcement of stone tool use at 3.4 million years ago will unleash a flurry of controversy and genuine disbelief among some scholars. However, I believe the team has presented a convincing case of stone tool use during Lucy's time. These unexpected results may well generate a new understanding of early hominid behavior and will prompt a reexamination of the tens of thousands of animal bones already collected from this time period at Hadar, Lucy's home, and other sites in Kenya and Tanzania."

Dr. Curtis Marean of the Institute of Human Origins at Arizona State University said, "Most of the marks have features that indicate without doubt that they were inflicted by stone tools." He helped to identify the nature of the marks.

Criminal forensic science has the technology to determine what type of knife is used in murders when only skeletal remains have been found. Also, the ossuary with the inscription; John, Brother of Jesus, has pictures of the microscopic particles inside the cut marks. Surely they can do more to definitively decide this question. However, just a glance at the fabulous pictures posted on this site and I can see for myself that these marks are human. GREAT BLOG!

Yes, you are right. It appears that this find is conclusive, since stone fragments were found in the cut marks and stone use among Lucy's kin was already well estabished by Johanson and the Leakeys. Still, many are not willing to accept the evidence because it doesn't conform to their scientific ideology.