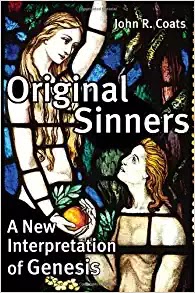 John R. Coats, a former Episcopal priest and graduate of Virginia Theological Seminary, has written Original Sinners: A New Interpretation of Genesis (2009), in which he presents Genesis not as historical narrative, but as metaphor and symbolism reflecting the reader's own life. In other words, he misses the point of the book! Genesis is about the origin of Messianic expectation among Abraham's Horite people and about the ancestry of Jesus Christ.

Here is part of a review of the book:


The introduction lays out the sources used in compiling the chapters. One form of understanding these is known as Source Theory, which is briefly explained. The notes at the end list each page's group of references for further study if one chooses, since some are more obscure than others.

Coats sprinkles his thoughts with personal reflections of how he identifies with the people and places in Genesis. For the most part, these are interesting. The tale of an interaction with his daughter will curdle milk. While I realize it should be taken in context, Coats is also clearly out of line.

Rather than an interpretation of each chapter, there are four large sections covering a certain person or group. These sets have a further breakdown of Acts - three subsets apiece. In a way, this makes a lot of sense. Readers can read straight through, or select whatever section appeals best.

Despite Coats having a theological background, this book is easy enough to understand. There is a natural ebb and flow to his words so readers will want to know more as the pages go by. Is it the best interpretation out there? Each person can decide. Further study might be indicated, but perhaps not. Just don't consider this book the final word on the subject. Other ones exist.