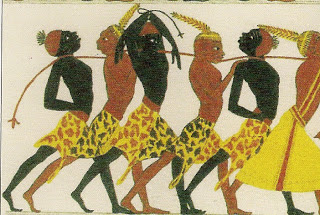 
The Nubians were a Nilotic people who would have been called Kushites in the time of Abraham's ancestors. Some were red and some were black.

Before the naming of modern nations in Africa, Kush was ruled by powerful tribal chiefs. Ancient Kush was a much larger territory than generally recognized. It probably included Upper Egypt, and much of Sudan, Ethiopia, Somalia, Kenya and Tanzania. Kushite peoples moved into Eurasia where they were known by different names: Kushan, Kushana, Saka, Scythians, etc. It is likely that the Hittites were culturally Kushite.

The following is a report about tetracycline laced beer consumed by Nubians who lived between 350 and 550 A.D.  However, Egyptians and other Nilotic peoples consumed beer as early as 3000 B.C. The fermentation process was perceived to be a gift from the High God. Nubian beer is mentioned in the Ancient Pyramid Texts (Utterance 151): "O Osiris the King, provide yourself with the ferment which issued from you - 2 bowls of Nubian beer."

Clearly, there is a ancient precedent for what George Armelagos found.

People have been using antibiotics for nearly 2,000 years, suggests a new study, which found large doses of tetracycline embedded in the bones of ancient African mummies.
What's more, they probably got it through beer, and just about everyone appears to have drank it consistently throughout their lifetimes, beginning early in childhood.


While the modern age of antibiotics began in 1928 with the discovery of penicillin, the new findings suggest that people knew how to fight infections much earlier than that — even if they didn't actually know what bacteria were.


Some of the first people to use antibiotics, according to the research, may have lived along the shores of the Nile in Sudanese Nubia, which spans the border of modern Egypt and Sudan.


"Given the amount of tetracycline there, they had to know what they were doing," said lead author George Armelagos, a biological anthropologist at Emory University in Atlanta. "They may not have known what tetracycline was, but they certainly knew something was making them feel better."


Armelagos was part of a group of anthropologists that excavated the mummies in 1963. His original goal was to study osteoporosis in the Nubians, who lived between about 350 and 550 A.D. But while looking through a microscope at samples of the ancient bone under ultraviolet light, he saw what looked like tetracycline — an antibiotic that was not officially patented in modern times until 1950.


Read it all here.

Beer was a staple in Egyptian diets and was listed in the rations for pyramid builders. Some archaeologists suggest that we owe the development of agriculture to the desire to brew beer. Despite the availability of other food resources, barley was domesticated as early as 10,000 years ago even though it is a labor-intensive crop.


Related reading:  Who Were the Kushites?; The Saharan Origin of Pharaonic Egypt; Wine Use in Antiquity; Neolithic Medical Care