In conversations with students I have found that there is a great deal of confusion about the names and morphological features of the earliest human populations. In this essay, we will look at some of these finds to clarify the picture of early human populations.

The search to understand archaic humans was led astray by a fraud in England called the Piltdown man. This skull was the discovery of Charles Dawson in 1912. It had a large brain case similar to modern humans and an ape-like jaw. It was exposed as a fraud in the early 1950's. Because of Darwin's theory of apes and humans evolving from a common ancestor, people expected to find human ancestors with ape-human features.

Recent discoveries in South Africa and in Southern Siberia, along with molecular genetics, has provided a much more complex picture of human origins, but there is agreement that Africa is where the earliest humans lived.

Cro-Magnon was once used to refer to the population that lived alongside Neanderthals between 35,000 and 13,000 years ago (mid Holocene). The name 'Cro-Magnon' refers to a rock shelter near the Dordogne Valley of France where parts of five skeletons were discovered in 1868. Scientists compared these skeletons to Neanderthal skeletons found in similarly dated sites at Paviland, Wales and at Combe Capelle and Laugerie-Basse in France, and decided they were different from the Neanderthals. However, Cro-Magnon remains were very like modern humans.

Homo neanderthalenis is the term coined in 1863 by Irish anatomist William Kin. This human population was named after the Neander Valley in Germany where the first specimen was discovered. These are the bones of the original Neandertal from the Neander Valley and they are within the range of modern human anatomy.

T
The sequencing of the Neanderthal genome is almost complete and not surprisingly it reveals that Neanderthals and modern humans are virtually identical. Here's the report:


It took four years for Pääbo’s team to assemble a working sequence from DNA in the bones of three 38,000-year-old Neanderthal women, found in Croatia’s Vindija Cave. The sequence, published May 6 in Science, covers about 60 percent of the entire genome. (Read the full report here.)


The discovery of Australopithecines in South Africa beginning in 1924 showed that the early hominins had human bodies and brains of a size proportional to their bodies. The size of these archaic brains was small, but brain size does not preclude complexity of thought.

Australopithecus afarensis is the term coined by South African anatomist Donald C. Johanson. These 3.2 million year old remains were found in Hadar, Ethiopia in 1973. For about 20 years A. afarensis was described as the earliest known “human ancestor species.” Australopithecus means “Ape of the South” and afarensis refers to the Afar Triangle of Ethiopia where the fossils were found. The first discovered skeleton of this population was named "Lucy" and she was described as an ape rather than a human.  Only about 40 percent of her skeleton was recovered.

Since 1974, many more A. afarensis bones have been found in Africa, mainly in Cameroon, Ethiopia and Tanzania. All are at least 3 million years old. The bone structure reveals that these were not apes, but early humans. They walked upright (erect) and had human ankle bones.

When Jeremy DeSilva, a British anthropologist, compared the ankle joint, the tibia and the talus fossils of human ancestors ("hominins") between 4.12 million to 1.53 million years old, he discovered that all of the ankle joints resembled those of modern humans rather than those of apes. Chimpanzees flex their ankles 45 degrees from normal resting position. This makes it possible for apes to climb trees with great ease. While walking, humans flex their ankles a maximum of 20 degrees. The human ankle bones are quite distinct from those of apes. (Read about DeSilva’s research here.)

A recent discovery of a complete fourth metatarsal of A. afarensis at Hadar that shows the deep, flat base and tarsal facets that "imply that its midfoot had no ape-like midtarsal break. These features show that the A. afarensis foot was functionally like that of modern humans." (Carol Ward, William H. Kimbel, Donald C. Johanson, Feb. 2011) Read the report here.

Additionally, A. afarensis apparently used polished bone tools, shared food (which apes don’t do) and used fire. Some of the earliest evidence of controlled use of fire by humans was found at Swartkrans in South Africa. Other sites that indicate fire use include Chesowanja near Lake Baringo, Koobi Fora, and Olorgesailie in Kenya.


Mary Leakey’s 1979 discoveries in Tanzania added to the evidence that humans walked the earth about over 3 million years ago. At Laetoli, about 25 miles south of Olduvai Gorge in Tanzania, Leakey discovered footprints of a man, woman and child created about 3.6 million years ago and preserved under falling ash from the nearby Sadiman volcano. The raised arch and rounded heel of the footprints showed that whoever left these footprints walked as humans today.


Johanson, who was scheduled to speak before Mary Leakey, scooped Mary's speech. She was angry that Johanson had named her discoveries, using a designation that was totally at odds with what she believed to be the evidence. Johanson's name stuck though he clearly has doubts based on more recent discoveries as to the accuracy of the ape designation.


The designation of the finds in Ethiopia as apes is contradicted by the evidence that these fossils had oppositional thumbs, short fingers, human dentition, and apparently built fires. Recent discoveries in Dikika, near Gona and Bouri, Ethiopia indicate that they shared their food, and used flints to scrap, saw and chop. Two fossilized bones have been found that appear to be marked by stone tools. On the basis of low-power microscopic and environmental scanning electron microscope observations, these bones show unambiguous stone-tool cut marks for flesh removal and to access bone marrow. 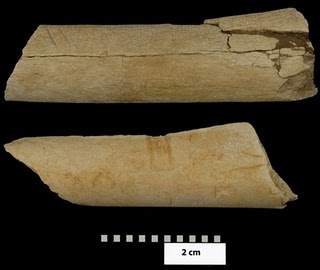 Johanson has said, “There is no question that the announcement of stone tool use at 3.4 million years ago will unleash a flurry of controversy and genuine disbelief among some scholars. However, I believe the team has presented a convincing case of stone tool use during Lucy's time. These unexpected results may well generate a new understanding of early hominid behavior and will prompt a reexamination of the tens of thousands of animal bones already collected from this time period at Hadar, Lucy's home, and other sites in Kenya and Tanzania.”


Dr. Curtis Marean of the Institute of Human Origins at Arizona State University said, "Most of the marks have features that indicate without doubt that they were inflicted by stone tools." He helped to identify the nature of the marks.

Archaic humans dating to 400,000 years have been found in Southern Siberia and Northern Spain.

Archaic populations in Southern Africa are presently being studied by the Rising Star Expedition.

The earliest fossils that scientists agree to be fully human date to about 160,000 years and were found in desert sands near the Ethiopian village of Herto in 1997. These fossils show a range of anatomical features yet all the features are found among humans today. The nearly complete skulls of people who lived 160,000 years ago are, in the words of the American paleontologist Tim White, “like modern-day humans in almost every feature.”


Some of the Australopithecine fossils dating between 700,000 and 2.4 million years are recognized by scientists as early human fossils. Mary Leakey considered her 4 million year Tanzania finds to be Homo, not ape.

It is clear from this review of the data that the classification of fossils as ape or human has been revised several times because the criterion of classification of human and ape has not been consistently applied. It is also clear that scientists interpret evidence through their preconceptions and are prone to seek the limelight in order to gain funding to continue their work.


The evidence indicates that humans have been on the surface of the earth for millions of years and that a range of physical features from population to population has been the norm. Population specific features were likely enhanced because archaic people practiced endogamy (marriage within the clan). From 3 million years to the present, there was been a limited amount of physical changes in humans, but no change in the essence of humanity, and devotion to the theory of evolutionary branching of ape and human from a common ancestor simply is not supported by the data.

As to the theory of humans and apes having a common ancestor, this is not indicated by the genome research. See “Study Reports a Whopping ‘23% of Our Genome’ Contradicts Standard Human-Ape Evolutionary Phylogeny,” Evolution News, June 3, 2011.