Were you to ask my friends about me, only a few would know about Just Genesis and my work in biblical anthropology. More would know that I enjoy gardening and renovating houses.  I'm working on my fourth house at the moment.

A few more would tell you about the young people I help to develop their writing skills and find publishers for their work. You may read some of their work here and here.

Only my closest friends know that I rehabilitate disturbed cats. These are often abandoned pets that have been severely abused to the point that they cannot be adopted until they learn to trust humans and exhibit normal feline behaviors. My three helpers in this effort are cats: Maximilian (8 years), Widget (6 years) and Bibb (2 years).

All of the cats I've worked with have been successfully adopted.  Some were easy to rehab and others were very challenging.  The easiest was an orange tabby named George.  The most difficult was a very large and very aggressive gray female who could not be brought into contact with my cats because she would have injured them.  She had been named "Emerson" for Ralph Waldo.  I'm sure that contributed to her problem!  The first step in her rehabilitation was to rename her "Eme" and keep her in solitary confinement with lots of toys, food, water, soft pillow beds and climbing trees for five weeks.  During that time I visited her four times a day for fifteen minutes.  Finally she allowed me to stroke her and eventually she climbed on my lap.  After five weeks and a five-page typed report on her adjustment and needs, Eme went to the Woodford County Humane Society which found her the perfect home.

I am fond of dogs and horses also, but cats just seem to find their way to my house.  I have the local animal rescue on speed dial because I simply can't take on every case.  Sometimes the same cats that the rescue lady takes away make their way back to me via the humane society since I'm on the list as a foster home for cats waiting to be adopted.

When God created this world, He thought to make cats.  I'm not sure why, but if you are fond of these creatures you know what a wonderful invention they are!  Cats are playful, independent, affectionate, proud, often protective and territorial, and the perfect defense against rodents. They have been the subject of great poetry, my favorite being Dorothy Sayers' "The Final Redemption of Cats."

The ancient Egyptians had a special affection for cats, to the point that they even mummified them. In 1888 an Egyptian farmer discovered a large tomb with 80,000 mummified cats outside the town of Beni Hasan, dating to 1000-2000 BCE.

Just for fun, here are some images of cats: 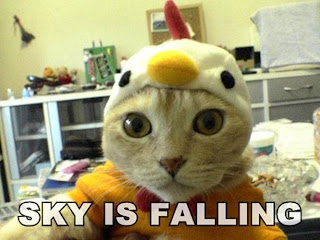 A woman after my own heart.

I love the "Inbread Cat" and my home wouldn't be very nice without my three barn cats: Tom House, Tom Barns & Jackaroo...
Three cheers for cats!!

Cats go to heaven, too. (And live in peace with dogs and mice.)

We have two ourselves, as well as two dogs.

Few things more comforting and enjoyable than a soft, warm, furry, purring animal sprawled out on you.

With three cats and only one lap, there is competition on some cold days. :)

I have another cat named Mr. Werthers. He has congestive heart failure but purrs when I enter the room. He is staying with me until he can safely return to my sister's house.

Also I now have 3 ducks. They were abandoned at the lake next to my house. My home has become a place of quacks!