Migrations Out of Africa


I have discussed the evidence of molecular genetics in Haplogroups of Interest to Biblical Anthropologists.

Genesis 10 speaks of the migration of the Kushites into Mesopotamia. This is one of the later migrations out of Africa, between about 3500 and 1500 B.C. The Kushites represent a highly organized people, consisting of numerous clans and castes. Their rulers controlled the major water systems and founded early mining industries along the Nile and in southern Israel. Nimrod (Gen. 10:8-12) was a Kushite kingdom builder. He and his brother Ramah were the sons of Kush.

Amenhotep III ruled between about 1382 and 1350 B.C. (about 600 years after Abraham's son Jok-tan). His name means "peace of Amen" and indicates a date when Amen, a name for God favored over the name Set, which was favored in the Delta. It was during the 18th dynasty that the title 'King's Son of Kush' was first used. The earlier known Kushite ruler was called K-ash-ta which means The Throne of Kush.

Penelope Aubin has written, "According to I. Hofmann (and several other scholars starting with F. Cailliaud in 1822), similarities in art may attest to significant cultural contacts between the Indian subcontinent and ancient Kush. In addition, there are very clear resemblances between the Egyptian numeral system, particularly the Hieratic, and the oldest Indian forms. Resemblances in script strengthen the hypothesis of contacts with the Nile Valley."


Earlier Migrations out of Africa

Evolutionists maintain that "modern" humans originated in Africa about 200,000 years ago, reaching full behavioral modernity around 50,000 years ago.  The genetic root of modern humans is mtDNA Haplogroup L.

DNA studies are helping to piece together a clearer picture of archaic populations, their migrations and the mixing of archaic peoples. Of particular interest is the migration of Haplogroup C, which traces lineage by the Y-chromosome.

The negrito Andaman and Nicobar Islanders belong to M130 (Haplogroup C) designated by Spencer Wells, who leads the Genographic Project. This lineage of Nilotic peoples migrated between 70,000 and 50,000 years ago from Africa and Arabia, traveling along the coastlines and eventually crossing the sea. They moved eastwards to India, Japan and Australia.

The indigenous Orang Asli (aboriginal peoples) populations in the Malay Peninsula such as the Negritos (Jahai and Kensui) and Proto-Malays (Temuan) are associated with the first wave of human migration from Africa. It is believed that they may be descended from the Hoabinhians, as their mtDNA variation shows strong evidence for indigenous origins within Malay Peninsula, with time depth of ∼60,000 years ago. However, their origin and the route of their migration to Asia is still a matter of great speculation.

The 20,000 year old human skeletons found at Lake Mungo in New South Wales are may be descendants of the early Nilotic peoples who were seafaring.  Both groups buried their rulers in red ochre, derived from hematite, Fe2O3. The earliest known use of red ochre (300,000 years) is at the site of GnJh-03 in the Kapthurin Formation of East Africa, and at Twin Rivers in Zambia. Prominent persons were buried in red ochre for at least 40,000 years. 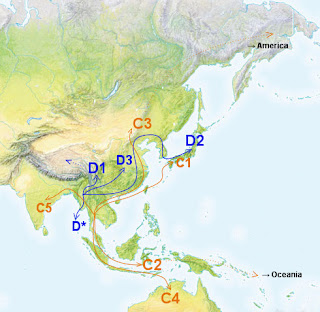 The Onges and Jarawas belong to Haplotype D which is also common in Tibet and Japan. The Ainu aboriginal people of Japan are in haplotype D (Y-chromosome) and haplogroup X (mitochondrial chromosome).  The Ainu have a red skin tone similar to Abraham's Horite (Edom = red) people. This explains why the Hebrew and Japanese alphabets are similar. 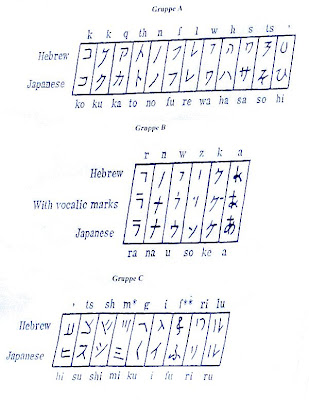 The Ainu/Annu also migrated westward and settled in Greenland, Labrador and the eastern coastline of Canada. The Ainu share a common female ancestors and are classified in mtDNA haplogroup X. The heaviest concentration of mtDNA haplogroup X is found among the descendants of the Annu living in Eastern Canada. They say that their ancestors crossed to the New World from Wales (which explains the absence of haplo X in Siberia).  This is supported by the discovery of red ochre burial in the Upper Paleolithic in Wales.

Sub-group X1 is restricted to North and East Africa, and also the Near East. Sub-group X2 appears to have undergone population expansion and dispersal after the last glacial maximum, between 21,000 and 15,000 years ago. Sub-group X1 is more strongly present in the Near East, the Caucasus, and Mediterranean Europe. There are concentrations of sub-group X2 in Georgia (8%), the Orkney Islands (7%) and amongst the Druze (27%), most of whom live in Galilee and have a red skin tone similar to the tone of the red Nubians and the Edomites/Horites of Genesis 36.