The Ainu of Hokkaido are genetically closest to the Ryukyuan of Okinawa and to the Andaman Islanders. The negrito Andaman and Nicobar Islanders migrated between 70,000 and 50,000 years ago from Africa, and eventually crossing the seas. The Onges and Jarawas of Andaman and Nicobar belong to Haplotype D, a subtype of Haplogroup C, which is also common in Tibet and Japan. The Ainu aboriginal people of Japan are in haplotype D (Y-chromosome) and haplogroup X (mitochondrial chromosome).


The Ainu preserved their customs as they dispersed out of the Nile Valley. This is evident when we compare the dress of the Ainu chiefs in Hokkaido (top) and Canada's eastern seaboard (bottom). 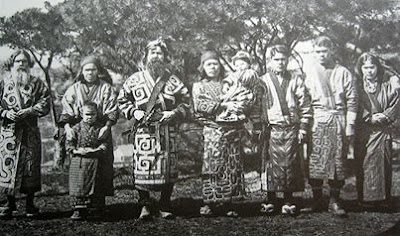 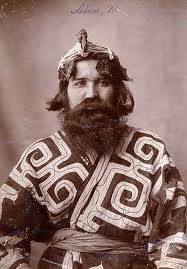 Ainu chief of the Miqmac in eastern Canada


The Ainu are at the center of Cavalli-Sforza's genetic distance chart. This suggests that they were very selective in their choice of marriage partners and likely practiced clan endogamy. This is a practice of some of the oldest human populations, and suggests that the Annu/Ainu may one of the world's first people.

The Annu/Ainu originated in the Nile Valley and dispersed in many directions following coastal routes and crossing seas. The Nilotic Annu/Ainu priests were associated with the most prestigious shrine and temples of the ancient world, including Nekhen and Biblical On (Heliopolis). The shrine at Heliopolis was known as Iunu, place of pillars. Heliopolis was one of the places were the Habiru (Hebrew) Horites served as priests. Joseph married a daughter of the priest of Heliopolis. The pyramids at Giza, Abusir and Saqqara were aligned to the obelisk of On.

As the Ainu dispersed they took with them their religion and rituals. It was their custom to build water shrines in circular valleys or basins (kar) and their priests performed rituals (nak) at these shrines. Kar is a very ancient lexeme. Lexemes are words that represent a whole complex of related ideas. Ki-kar refers to a circle as in Exodus 25:11: ki-kar za-hav ta-hork, meaning "circle of pure gold." Kikkar ha-yarden refers to the Jordan valley.

This genetic distance chart indicates that the Ainu at at the center of the dispersion of modern humans.


What do the following words have in common?

Kena, Canaan, Qatna, Kano, khinna/henna, Karnak (Egypt), Karnataka (India), Katakana, and Kana
They all share the KN root, as in the place kar-nak, meaning place of rituals. Kena and Canaan are related to the word Kain. Kano is a city in Northern Nigeria named after Kain.  It is north of Nok, which name appears as Hanock in the Bible.

Kinna and henna speak of the color red. Kana are the syllabic Japanese scripts. In Japan, Katakana is used to write Ainu.

Qatna (Arabic قطنا, modern Tell el-Mishrife) is an archaeological site in the Wadi il-Aswad, a tributary of the Orontes, 18 km northeast of Homs, Syria. The Ainu shrine city of Meroe on the Orontes is also of special interest. Likewise, the rock shelters of the Ani in Turkey attest to the archaic settlements of these dispersed Annu/Ainu. Ani is a ruined medieval city situated in the Turkish province of Kars near the border with Armenia. Kar refers to fortifications at high elevations. These places had temples and shrines and were served by priests.

Karnak on the Nile and Carnak in Brittany are examples. In Dravidian car means "sheltered together" and kari refers to a river. In Manding kara means "to assemble." In ancient Sumerian é-kur refers to a mountain house, pyramid, or elevated temple.

Since the Kar were places of burnt offerings, the term is often associated with charcoal and soot. The Turkish kara means "black." In Magyar korom refers to soot, as does the Korean word kurim. Among the Nilotic Luo kar specifies a place with boundaries.

The kars of the archaic world were mainly circular. Ki-kar refers to a circle, as in Exodus 25:11: ki-kar za-hav ta-hor, meaning "circle of pure gold."  The word kikar can refer to a circular enclosure.

Rock shelters and fortified sites have been identified in the Carpathian mountain range. The range is called Karpaty in Czech, Polish, and Slovak, and Карпати in Ukrainian, Carpați in Romanian, Karpaten in German, Kárpátok in Hungarian, Karpati in Serbian, and Карпати in Bulgarian. In Albanian karpë means "rock."

Karnak was the site of Ainu devotion to Horus, the "son of God." The Ainu had a red skin tone. Abraham's father was Terah the Ainu. The Ainu originated in the Nile Valley and dispersed to Northern Japan, Northwestern China, and Eastern Canada.