That is an interesting question raised by some theorists who are familiar with the Girgam, a chronicle of the rulers of Kano-Borno who controlled commerce along the rivers. Girgam, also called Dīwān, was discovered in 1851 by the German traveler Heinrich Barth. The chronicle lists Adam, Seth, Noah, Shem, Kenan, Enosh, Terah and many others. Some of the names appear to have been "corrected' by Arabic scholars. However, the orthography is closer to the presumed Hebrew original than to that of the Arab authors.

Gir indicates that these rulers were also traders. They kept records of the transfer of goods, weights and values. The Sumero-Akkadian term girginakku refers to a box for written tablets.

Kano-Nok-Borno is the region where some of Abraham's ancestors lived. Bor-no means "Land of Noah" and the local Kanuri people called Lake Chad Buhar Nuhu, meaning "Sea of Noah". Kano is likely a variant spelling of Kain (Cain) and the term Nok appears as to be related to the royal name names Enoch and Hanock.

The prologue and first section of Girgam name biblical patriarchs, ancient Mesopotamian kings, and the last Assyrian kings. This has led to speculation that Kano-Borno was the home of refugees from the collapsing Assyrian Empire. According to this theory, the royal titles in the Girgam and the origin-chronicles indicate mass immigration of various peoples who formerly lived under Assyrian rule until that Empire collapsed in 612 BC. There is less evidence to support this view, however, than there is to support the biblical record of Kushite expansion. 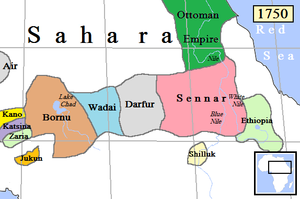 Map shows Kano and Borno and related kingdoms extending to the Nile in 1750.

Another theory is that Kain and Noah were early Proto-Saharan rulers. According to Genesis 10, their Kushite people spread far and wide. Nimrod, the son of Kush (Gen. 10:8), controlled the Tigris-Euphrates River Valley where tablets have been found that speak of the greatness of his rule. He is known in history as Sargon the Great. Kushite rulers controlled a vast expanse from Nigeria to India, what I have termed "the Afro-Asiatic Dominion." Akkad was the center of Nimrod's ruler (Gen. 10:10) and Akkadian cuneiform was the script of his empire.

Abraham's father Terah was no more a refugee than Nimrod. Instead, they were Kushite kingdom builders. Terah controlled the length of the Euphrates. He was a descendant of Nimrod, the son of Kush. The authors of ancient Indian literature claimed that the Kushites ruled the archaic world for 7000 years.

Prof. Bator Vamos Toth has identified hundreds of place names that link the Sudan and Central Asia. For example, the places names Orissa and Karnak are found in Egypt and in Central Asia. The temples at Karnak in Egypt and at Karnak in Orissa, India, are Sun temples associated with the cult of Horus, who the Horite ruler-priests regarded as the "son of God", miraculously begotten according to an ancient promise. This Kushite migration has been confirmed also by DNA studies.

Clyde A. Winters has shown that the "Elamites, Dravidians, Sumerians and Manding are all of Proto-Saharan origin. They were called the Kushites, Nubians, Afro-Asiaitcs, etc. Testimony of the great heritage of these dispersed peoples results from their boldness in trade and seafaring expeditions.

There appears to be a relationship between the words gir or gar and ghar or khar. Bulghar was spoken by the Asiatic Ghars (Khars) from which the takes its name. This region was the home of the prehistoric ancestors of the Bulgarian and Hungarian/Magyar peoples. The term Onogur refers to a confederation of related clans. One theory says the word Ono pertains to On-Oğuz, meaning "ten tribes of the Oğuz". Onogur may also be related to the name "On" (iunu = place of pillars) also called Heliopolis. Joseph married a daughter of the high priest of On, a Horite shrine city to which the great pyramids of Giza, Saqqara, and Abusir were aligned.


The word ghar means house, as in royal palace or royal city and is a cognate to word khar. In ancient Egyptian, khar refers to a measure of fuel used to offer sacrifice in the temple. The temple was in the precinct of the royal palace, often located near the Nile. Among the Guruntum-Gar, a West Chadic people, khar appears as har in last names. An example is Andrew Haruna. Haruna is a variant spelling of Aaron, suggesting a connection between the Hebrew priesthood and their Nilotic ruler-priest ancestors.

The Kushites also spread along the Shari and the Benue rivers, establishing kingdoms as far as Lagos in Nigeria and into the southern Kordafan. This explains the linguistic connections between Yoruba and Akkadian. Kushite rulers and traders moved out of Africa to Northern Japan and the Philippines.

Related reading: From the Nile to the Philippines: Tracing the Gurjars; The Kushite-Kushan Connection; The Nile-Japan Ainu Connection; Abraham a Descendant of Both Cain and Seth; Biblical patriarchs from a pre-canonical source mentioned in the Diwan of Kanem-Bornu; Horite and Kushite Rulers Linked; Noah's Descendants; Europe's Oldest Prehistoric Town Unearthed in Bulgaria

The Ijebu talk of migration from Wadai and similar tribal marks with the people of Borno.

I don't yet know of any archaeological evidence indicating the presence of peoples like the Yoruba, Edo and Igbo, in southern Nigeria prior to 700BC. Perhaps then they left the Assyrian Empire around the time of 612BC when it collapsed.

That is possible, but when people migrate or flee from one area to another, they usually go to where they have kin. Were these people refugees, as claimed, their ancestors were Kushites, so they were returning to the region of their ancestors.

According to 2 Esdras 13, the people of Israel decided to leave Assyria for a place never before inhabited, and if the had made use of the Ephod (Ifa) to inquire of God they wouldn't have needed to go where they had any kin.

Esdras refers to a late period in Israel's history. It is post- exilic and we have no evidence that the post-exilic Jews had the Ephod or that they used it for inquiring of God.

Hi Alice,
I appreciate your work very much. I have a question for you. I am a so-called african-american (which is the name of two continents). I do not know much about my heritage. I have recently began to do some research especially after hearing that so-called negroes are not african. I was shocked, however, I could not say where I descend from because I do not know. All I know is what was taught to me in school. I didnt even know that arabs also sold negroes as slaves. I just found this out a few days ago. I was never taught this in school. I was also told that arabs called negroes Yahoodee,which means yehuda, or jew, and the people of the book. Arabs also said that negroes were cursed by God and pre-destined to be slaves. I am told that I descend from the ancient israelites. I am told that blacks in America are hebrews and not africans. Why would africans sell millions of their own people? It makes no sense. In the bible, it talks about how israel would lose their identity because of disobedience. It also talks about how the lord says he will scatter israel into the four corners of the earth. He also says in deuteronomy 28:68 that he would send israel into eygpt again by ships as bondmen and bond women.Egypt also means bondage. I can not say they were sent back to the land of eygpt because God said that they would be sent to a nation from far away, a nation that neither them or their fathers have known. After the roman persecution in 70 AD the israelites fled. I know some returned but not all. Now we have missing tribes. During the Transatlantic slave trade, millions of slaves were sold and sent all over the place. Could this have been the diaspora? If you look at the curses of deuteronomy 28, it really fits the slaves and their descendants. Even on the birth certificates, we were referred to as negro and not african until recently. Also, Im not saying only the american blacks, but the puerto ricans, hatians, mexicans, native americans, dominicans, etc. What do you think?

There is a huge blind spot in American education and academia when it comes to Africa. You are right to investigate your origins since nobody will do this for you.

Likely your ancestors were West Africans which narrows the scope of your investigation somewhat. The groups that you might consider are Ashanti, Igbo, Diara, Takrur, Djolof, Mamprussi, Borgu, Dendi, Oyo, Yoruba, Igala, Kwararafa, Kano, Wagadugu, Mane, Fante, and Ibo.

The Arabs sold Jews and the Jews sold Arabs. Slavery was a widespread practice in ancient times. Usually these were people captured in war or kidnapped. Africans sold Africans from enemy tribes. All of this has been documented by historians.

The idea that African-Americans are descendants of the Jews is a theory with little support. Where some Jews black? Yes. Some were brown, others were reddish brown. Today many are white because the European Jews intermarried with Gentile Europeans. White Jews dominate the State of Israel which is guilty of reproductive crimes against Ethiopian Jewish woman. See this:
http://college-ethics.blogspot.com/2013/02/israels-abuse-of-ethiopian-women.html

You can find out if you are of Semitic lineage by having a DNA test. If four of your grandparents were born in Africa, the test is free. Here is information: https://www.facebook.com/notes/african-traced-descendants-of-the-diaspora/free-dna-testing-for-africans-that-have-4-grandparents-that-were-born-in-africa/600416113349474