Melchizedek, the ruler-priest of Jerusalem (Salem), is one of the most fascinating figures of Genesis.  His Hebrew name is malkîtsedek, which means righteous king. He is mentioned in Genesis 14, Psalm 110:4 and in the book of Hebrews, where he is given much attention by the Apostle Paul. Melchizedek is also considered in the works of modern philosophers such as Soren Kierkegaard.

It is clear from Genesis 14 that Melchizedek and Abraham were well acquainted.  Both belonged to the Horite order of ruler-priests which practiced endogamy. In other words, they were kin.  It is likely that Melchizedek was the brother-in-law of Joktan, Abraham's father-in-law. 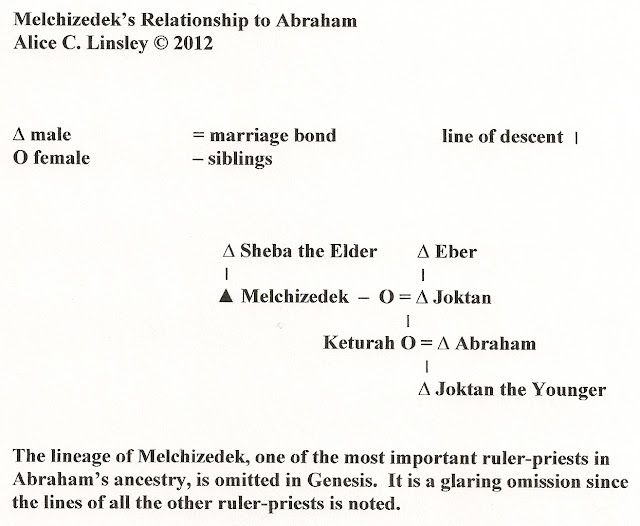 Abundant legends and erroneous ideas surround Melchizedek. In the Dead Sea Scrolls, he influences the demise of the Angel Belial and the wicked spirits in league with him. In the Second Book of Enoch, he is taken by an angel to Eden. According to Rashi, a French medieval rabbi, Melchizedek was Shem. This is highly improbable since Melchizedek lived at least 300 years after Shem. 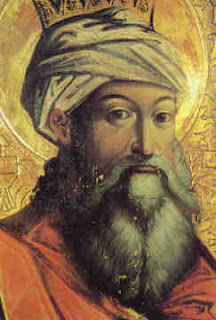 In the book of Hebrews, Melchizedek is viewed as a type of Jesus. This notion informs the Coptic view that Melchizedek was born of a virgin (Second Book of Enoch). Jesus is the "Priest after the order of Melchizedek."  Therefore His priesthood is from of old, existing before that of Aaron. This pre-existant order of priests expected the Divine Seed (Gen. 3:15) to come into the world and believed that He would be born of one of their own virgins.

As a type of Jesus Christ, Melichizedek is the Righteous King, the King of Peace (Salem), and is said to have no earthly father. In reality, Melchizedek did have an earthly father, probably Sheba the Elder, whose ancient royal line rivaled the House of David (II Sam. 20). If Genesis was compiled during David's reign, the omission of Melchizedek's ancestry was motivated by political expediency. 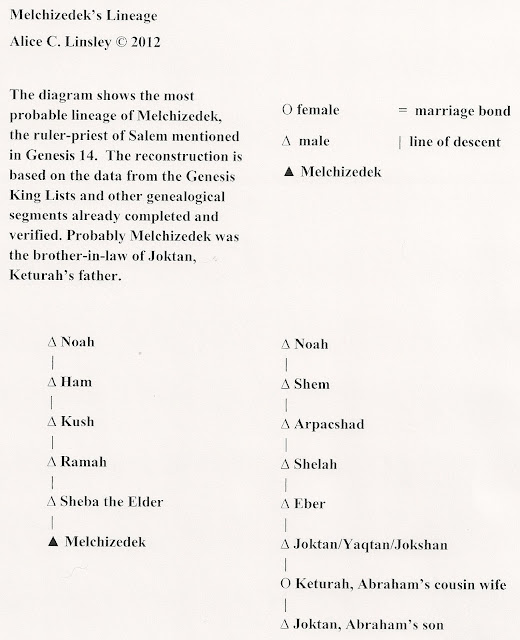 Related reading:  The Order of Melchizedek; Mary's Ruler-Priest Lineage; The Daughters of Horite Priests; The Messianic Priesthood of Jesus
Posted by Alice C. Linsley at 2:25 PM

Dear Alice,
I believe you have made an error in examining who in Genesis is the most probable person of Malchezedek. Look again at Genesis at what is written about the ages of the Patriarchs and then read Hebrews Chapter 7 and you will see that the oldest son of Noah - Shem - is indeed the Malchezedek they all speak of. High Priesthood was to occur again in the Levi'ites in the person of Aaron (brother of Moses) but not while the first Melchezedek was still alive. We can see from Hebrews 7 that Melchezedek is not a Levi'ite, but rather born much before (much older) as Levi pays tithes to him by the act of Abraham (great grandfather) paying tithes to Melchezedek. Other stories in Genesis relate that Abraham was blessed from the much older Melchezedek after returning from the battle of the four kings. The fact that Shem lived another 500 years after the flood (602 years old) means he could have outlived the 9 generations to follow, in fact he even outlived Abraham. Further evidence comes from the Book of Enoch, an amazing book authored by Enoch, the great grandfather of Noah, which tells that Shem took a different path than his two brothers Ham and Japheth. The Lord's promise was to Noah and his son's that they would repopulate the earth and priority went to Shem to become the High Priest from the teachings of his great great-grandfather Enoch, the first to be taught the deepest secrets of our creation and "hidden" reality.
My name is Asim, and I am a scholar of many Holy Books and the secrets of our world. If you have questions you would like to ask, you can contact me.
Peace and Love.

You refer to many sources to reach your conclusion. I am a Biblical Anthropologist. I draw my data from the Bible.

Alice, I am enjoying your work. I have been taught that Melechzedek was a mysterious figure a pre incarnate of Christ. Help me understand how this line of teaching of Melechzedek being a mystery came into evangelical preaching and theology? It makes me wonder what is being preached it the masses. I always wondered why they saw him a pre incarnate and I saw him as a priest from a far off land. I don't understand the Christ connection at this point. What is it that I am not understanding? I just need clarification, please.

Evangelical preaching and exegesis tends to recycle material from the rabbinic literature. This idea that Melchizedek has no known ancestry come from the rabbis. There is an agenda. It is ironic, isn't it, that Evangelicals claim the Bible to be their authority and yet they turn to the Talmud for understanding of the Bible.

What is that agenda?

To support and perpetuate the Jewish narrative as Dr. Cohen represents it here:

Today many Jewish scholars recognize that this narrative does not align with the facts.