In February 2012, Egyptologist Souley Garba (a Nigerian) announced his discovery of a pyramid mound near the village of Dan Baki, 20 km west of Zinderand 2 km north of the village of Tirmini. Garba speculates that the unopened pyramid might contain more than 40,000 gold objects.
The Dan Baki pyramid has a twin nearby and may to be part of a series of mounds located in the region of Tanout. Many other pyramids have been found across the Sahara.

The Proto-Saharans left behind engraving of bulls, calves, elephants, and mules. These giraffe petrogylphs in Niger date to between 6000 and 8000 years. The two giraffe, thought to be one large male in front of a smaller female, were engraved on the weathered surface of a sandstone outcrop. 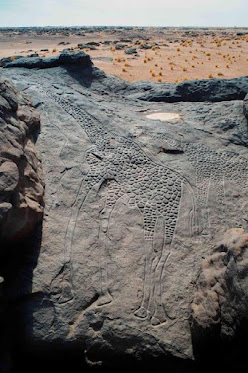 Souley Garba claims that the mound of Dan Baki is 4500 years old. It is in an advanced state of deterioration, but was not open when it was discovered by Garba.

Mr. Garba reports that this discovery is the "result of our activities we have been carrying out over 7 years and with a private institute of the United States of America." Garba explained that years of study of the hieroglyphic texts led him to the name of the village where he discovered the pyramid. He believes that the point of origin of humanity is in Niger. From there people spread into Chad, Nigeria, Sudan, Egypt, Yemen and Saudi Arabia. He has not attempted to explain the presence of more ancient monuments in Southern Africa, Turkey and China.

Study of the ancient hieroglyphic texts reveals a close affinity between Ancient Egyptian and Hausa. The names Tanout and Dar-Gaza recur in the hieroglyphic texts that Garba studied. He says that Ta-nout means "belongs to the sky"  and Dar-Gaza means "crown of God" and refers to the sun. Gaza is a variant of .
Hausa is in the Afro-Asiatic language group. This group includes Akkadian (the oldest known Semitic language), Ancient Egyptian, Arabic, Aramaic, Amharic, Babylonian, Chadic, Elamite, Ethiopic, Hahm/Jaba, Hebrew, Phoenician, Sumerian and Ugartic. The diversity of this group is amazing! Chadic alone has 600 dialects.

There is also a sphinx near the twin pyramids and Garba describes it has having a lion shape. 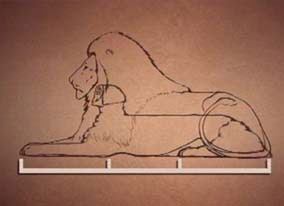 The Zinder mounds reflect a very ancient practice of building mounds, pyramids, and high places. The Dan Baki site is especially interesting because there appears to be a sphinx. This is Sanounou Ybrah's 3D before and after reconstruction of the pyramid and sphinx. 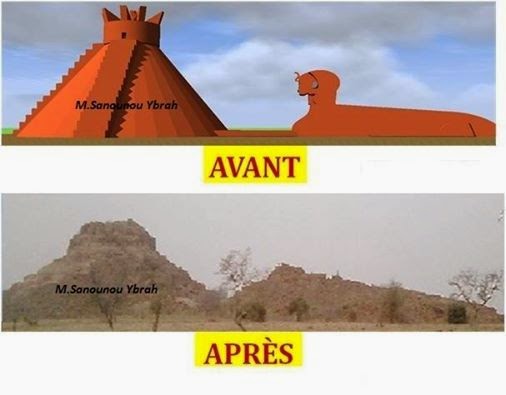 Here are some interesting facts about Niger:

Niger has both prehistoric sites and protohistorical settlements.

Paul Sereno has been studying the 200 human burials at the Gobero site, on the edge of a paleolake in Niger. This cemetery provides a record of human occupation in this area from 8000 B.C. to about 2500 B.C.

Niger has grown 200 million trees over the past two decades; the only country in Africa to have added forest cover in the same period.

Related reading: Pyramids and Mounds Galore; Was the Giza Sphinx a Recumbent Lion?; The Mysterious Pyramid at Zinder (en français); Fascinating Conversation With Laouali Yahaya; Undiscovered Pyramids Seen From Space; When the Sahara Was Wet; Nilotic Cattle Herders; Boats and Cows of the Proto-Saharans

Please be careful with regards to the reports of Souley Garba. He is known in Niger to have been fascinated by egyptian mysticism, has not provided solid sources for his hyeroglyphic materials, and the pyramid he has discovered does not bear any striking difference from a natural rock formation in this area. He claims many remarkable things. Like for instance that the ground water basins in Niger are connected to the Nile and supplying it with water. Please verify what private institute he has been working with, and if there is any written report on this discovery before drawing any assumptions from this.

The Niger Basin and the Benue Trough were once connected to the Chadic Basin and to the Nile. See this:

The mounds are like those of a similar age built by the Kushan. See this:
http://jandyongenesis.blogspot.com/2012/11/the-kushite-kushan-connection.html

Has there been any update on Sule Garba's Niger Pyramid discovery of almost a year ago?

Sunday June 12, 2016 10:00 AM EST tune in to hear about our discovery of a pyramid in South Sahara WEST AFRICA in Dan Baki, Zinder, Niger. http://www.blogtalkradio.com/thevalleyofdrybones/2016/06/12/the-helios-biblios-hour-book-of-the-sun-the-dan-baki-pyramid-at-zinder