Archaeology and the Afro-Arabian Context of Genesis


"Upon this first...rule of reason, that in order to learn you must desire to learn, and in so desiring not be satisfied with what you already incline to believe, there follows one corollary which itself deserves to be inscribed upon every wall of the city of philosophy: Do not block the way of inquiry."--Charles Sanders Peirce, 1896


Arabia as a region was never ethnically nor linguistically distinct from Africa. Arabia was the connective tissue in the body of the ancient Afro-Asiatic Dominion. Southwestern Arabia, the Tunisian island of Djerba, coastal Yemen, and the Horn of Africa have common flora and fauna.

South Arabia and specifically Yemen, have Paleolithic sites, tumuli, and megalithic enclosures dating to the Neolithic. In the region of Dedan there are magnificent tombs carved in the mountains. They are decorated with geometrical motifs. This site also has many Dedanite, Minaen, Lihyanite, Thamudic, and Nabataean inscriptions.
Prior to 2500 BC, two Bronze Age cultures existed in North Yemen. In the middle of the second millennium BC, the first important urban centers appeared in the coastal area, among which are the sites of Sabir and Ma'laybah. This Sabir culture, named after the German-Russian excavations in Sabir beginning in 1994, has been the subject of great interest.
Features of the ancient culture common to the adjacent regions of Africa and Arabia include Tukul huts, pottery, weapons, tools and burial finds. Tukul huts of the Tihamah are identical to those found on the Ethiopian highlands and in the parts of the Sudan that once drew water from the Nile. East Africa Red Pottery has been found at Petra and along the Yemen coast.

Archaeologists working in the Ethiopian highlands have identified the remains of settlements from the first millennium B.C. that had strong cultural and religious connections with coastal Yemen. Recent excavations and surveys have focused on the ancient town of Yeha, believed to be a major center of the Diamat kingdom (c.700 B.C.).

Excavations at Yeha and surrounding sites have uncovered buildings, burials and pottery that indicate cultural connections with the culture of ancient Yemen. Among the discoveries was a perfectly preserved sacrificial altar adorned with a Sabean royal inscription.


The 2008 discovery by Ethiopians archaeologists of the sacrificial altar was made in Meqaber Ga’ewa, a previously unknown location near the city of Wuqro. The altar bore a royal inscription in Old South Arabian (Dedanite) bearing the name Yeha. This is likely related to the Israelite name for God - YHWH. The double H likely represents reduplication for emphasis or enhancement, as in the phrase I am I am (Exodus 3:14). Reduplication is a common feature of languages in the Nilo-Saharan and Semitic languages.

Further, genetic research has demonstrated extensive female-mediated gene flow from Sub-Saharan Africa into Arab populations of the Tihamah, the Hadramawt, and the Near East.

The Tihamah is a low narrow plain along the eastern shore of the Red Sea. Hemmed in by mountains and high plateau, the climate is hot and humid. A site survey of human occupation for this region was completed in 2008 by a coalition of Yemeni Governmental agencies. The survey documented a large number of sites dating to the early Holocene containing obsidian tools, especially geometric microliths like those found on the Horn of Africa. 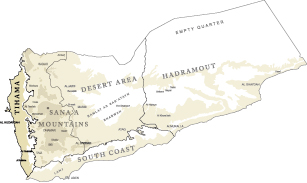 The name of the coastal region is related to the Akkadian words for sea, tâmtu and ti'amtum, and to the Egyptian word tehem which refers to water. The Hebrew word tehom in Genesis 1:2, refers to the chaotic deep, the primeval chaos represented by dark, turbulent waters.

There appears to be a very ancient association between the mythological Tiamat and the Ainu. Tiamat bore two hairy sons called Lahmu and Lahamu, probably related to the Lehab of Genesis 10:13. Their names mean the "hairy" and they were temple gatekeepers in Eridu. According to the myth, Lahmu and Lahamu were associated with Anu, a deity and a people. There may be a relationship to the hairy Ainu of Northern Japan.

The Ainu are at the center of Cavalli-Szforza's Genetic Distance Chart, which is what would be expected of "First People." Ainu is also spelled Annu and Hannu. In all the ancient texts they are described as bearded and hairy with a reddish skin tone. Esau's physical description in Genesis 25 corresponds to the description of the Ainu. The Ainu word for priest is Tera (Terah) which is the title held by Abraham's father. 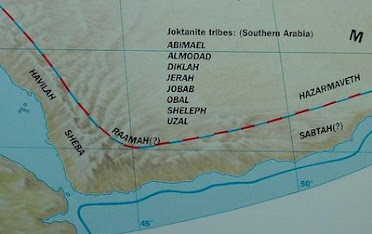 The Lehab were later classified as Dedanites and among them two groups are especially notably as they were metal workers: the Letushim and the Leummim, both groups being descendants of Abraham by his cousin wife Keturah (Gen. 25:1-4). Keturah's son was Joktan, the progenitor or acclaimed common ancestor of the Joktanite clans of Arabia.

Related reading: The Urheimat of the Canaanite Y; The Nubian Context of YHWH; The Canaan That Abraham Knew; The Sabir Culture and Coastal Yemen during the second millenium BC; The Nile-Japan Ainu Connection; A Kindling of Ancient Memory; The Afro-Arabian Dedanites; The Nile and Tigris Linguistically Connected; Biblical Sheba and East African Settlements Linked