Is Hebrew an African Language?

I believe the evidence supports the view that many of the languages in the Afro-Asiatic family have words that can be traced back to biliteral roots found in Africa. Some of the figures or marks found in later scripts are found on Proto-Saharan pottery and on petroglyphs in Sudan and Somalia.

Before the Old Testament books - originally all separate clay tablets or scrolls - there were Paleo-Hebrew writings found in the region of Judah and Edom. Mostly these were commercial records, trade agreements, and political records. They were sealed with Paleo-Hebrew bullae/seals, many of which used the Holy Name or variants of the Holy Name like Yah or Yahu. This name was known in ancient Nubia.

The Hebrew Bible has many non-Hebrew words that are derived from proto-languages of peoples who migrated out of the Nile Valley and the Sahara. Hebrew relies on Proto-Canaanite and ancient Egyptian and Proto-Saharan words. The ancient Egyptian signs (hieroglyphs) provide valuable clues to understanding many of the non-Hebrew words that appear in the Old Testament that have a Nilo-Saharan origin. Egyptian hieroglyphs were widely used among the early Semites because Egypt had become very powerful and exercised great influence in Canaan as evidenced by the Egyptian shrines on the ancient Horus road.

Another writing system that is important for understanding non-Hebrew words in the Old Testament is Sumerian. Some Sumerian words like: sahar (sand, dust, black, ashes); eden (steppe land, watered plain), and harran (route, roadway) appear in the oldest material in the Old Testament. Sahar שחר is the Hebrew word for black.

All of the scripts I have mentioned are in the same Afro-Asiatic language family, except the Ainu, the origin of which is still disputed. The evidence suggests that it may be related to proto-languages of Turkey and Hungary. The Hungarians called themselves "Magyar" and claim to be descendants of Noah, a Nilo-Saharan ruler. It is also known that the archaic Nilotic rulers moved into Turkey because they built the shrine city Meroe on Mount Silpius overlooking the Orontes River. The fortress on the spur of Mount Silpius was named IO, which means “pillared place dedicated to the Creator.” The O was a solar image. The sun was the Creator's symbol or emblem. Heliopolis (Biblical On) was called “Iunu” which means "place of pillars" because it was constructed with many pillars.

In ancient Egypt, the three superior planets Mars, Jupiter and Saturn were associated with Horus. Mars was named "Horus of the Horizon" or "Horus the Red." Jupiter was called "Horus Who Illuminates the Two Lands." Saturn was named "Horus, Bull of the Sky." These three superior planets were always depicted with the falcon-head of Horus (Krupp 1979).

The association of the falcon or owl with Horus is the likely source of the Semitic malk or melek, meaning king. In ancient Egyptian the owl was called m-l-k (See Gabor Takacs, Etymological Dictionary of Egyptian, p. 1).

In Hausa, a type of owl is called bambani. The word is related to ba-na, horni and hanu. Here we have a suggestion of the connection between Horus and Hanu or Ainu. (See Dictionary of Hausa, p. 19) Abraham's father bore an Ainu title- Terah, meaning priest.

In Hausa the word for king or ruler is sarki (See Charles Henry Robinson, Dictionary of Hausa, XXIV Preface). Auran saraki refers to the king's minister and is usually rendered chief. The word auran is related to Harun and Aaron, and to the Greek and Latin word for gold which is aurum. Aaron was asked by the Hebrews to fabricate a golden calf. The calf was the totem of Hathor-Meri, the mother of Horus. The oldest know site of Horus worship is Nekhen in Sudan. This appears to be the area where Abraham's ancestors listed in Genesis 4 and 5 originated.

Moses had a Kushite wife, probably his half-sister since Zipporah was his cousin bride.The Kushites were descended from Noah, a great Proto-Saharan chief. His grandson was name Kush and his great grandson Nimrod was a Kushite kingdom builder.

Kush was famous for gold, a fact to which Genesis alludes when speaking of the river Pishon that flowed through the land of Ha'vilah, where there is gold (Gen. 2:11). Another African river is the Gihon which wound through the land of Kush (Gen. 2:13). The high quality of Kushite gold is seen at Nekhen, the oldest known shrine city of Horus. An example is this gold plumed falcon representing Horus. 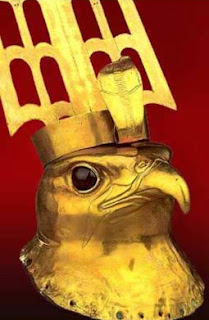 During his stay in Kano (1895), Henry Robinson persuaded a classical Arabic scholar to translate the Gospels of St. John and St. Luke from Arabic into Hausa, the scholar's first language. Here are some more interesting connections between Hausa, Hebrew and Ancient Egyptian.

The Hausa word for day  is rana. The root is ra, which is the Ancient Egyptian name for the Creator whose emblem was the Sun.

Al and El are synonyms for God. The plural form Allohi in Arabic is also found in Hausa and is equivalent to the Hebrew Elohim.

Amaria refers to lawful wife, as opposed to a concubine. There may be a relationship to the Amari speakers of Papua New Guinea. The Amari dialect is spoken in 14 villages from the Umi River to the Markham- Ramu Divide, with about 5,300 speakers remaining.