Dramatic and conventional in its portrayal... that's how I characterize the History Channel's presentation of Genesis and Exodus. Did it present Abraham's Horite people faithfully? Not at all. This was a rehash of old interpretations that fail to tell the whole story. In other words, a missed opportunity.

The program clearly stirred interest because after it aired this blog had over 300 reads in less than 30 minutes. The higher traffic continued the following day. People arrived from different search engines with questions like "Who was Abraham's firstborn son?" and "What color was Abraham?"

If you watched the program, try to imagine these changes:

Cain establishes a city and so does his brother Seth. These are great rulers over fertile lands in what is today the Sudan and central Nile Valley.

Noah's ark has a wooden frame and is covered with bundles of reeds. No Siberian tigers on the ark. The ark floated in the area of Lake Chad and came to rest on a mountain in East Africa. 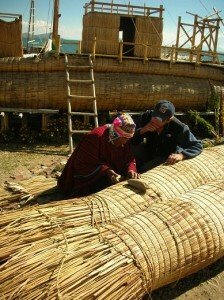 Abraham, the youngest of Terah's three sons does not look like a European Jew, but instead has a reddish brown to black skin tone because he is of Kushite ancestry. Lot, Abraham's nephew, would have a similar look.

Lot's choice to move to the plain was motivated by greener pastures for his flocks, but it was regarded as a bad decision because it broke with the pattern of his Horite ancestors who inhabited the higher terrain. This was not a conflict between rural and urban dwellers, as presented in the dialogue.  Horites also lived in the shrine cities which were on hills or mounds (tells).

Abraham and Sarah are much richer than portrayed. He is recognized as a "prince" among the Canaanites (Gen. 23:6). They are of the ruling class.  Hagar and Masek, though concubines, are royal handmaids.

Abraham is not a nomad. He does not move seasonally with his entire tribe. His two wives reside in semi-permanent settlements on a north-south axis. Sarah resides in Hebron and Keturah in Beersheba to the south. These settlements mark the northern and southern boundaries of Abraham's territory. The wives, children, and herds rarely move location. Abraham and his personal band of warriors are the ones who move within the territory.

Before Sarah loses hope and gives Hagar to Abraham, he has already married his second wife, Keturah. She gives birth to Abraham's first born son Joktan (Yaqtan). Joktan is the "father" of the Dedanite traders and scribes.

Here is a list of the sons born to Abraham by his two wives and his two concubines:

Hagar the Egyptian
Ishmael (Yismael), who was Egyptian since race/ethnicity was traced through the mother, as is true even today among Semitic peoples.

Masek, the Aramean
Eliezar of Damascus

One detail that the producers did get right is the T-shaped mark on Sarah's forehead. These are called Tilakam, Tikuli, Tilak, Tikli, and Tilaka among Kannada, Tamil and Telugu peoples and were worn by married Dravidian and Afro-Arabian women in Abraham's time. However, because of Sarah's high status her mark would not have been a smudge, but a well executed scar raised on the forehead by applying ashes to the original wound. (Dravidian is related to the languages of Chad, Sudan, Egypt and Somalia. Read more here.)

The T was a sacred symbol of the oversight of the Creator. The Tau and the cross are already evident among Abraham's Horite people who expected a woman of their blood lines to conceive by the overshadowing of the Creator whose emblem was the Sun. She would bring forth the "Seed" of God in fulfillment of the Edenic Promise (Gen. 3:15). This is the origin of Messianic expectation.

Another mark on the married woman's forehead was a solar tattoo. The oldest evidence of this is found on the mummy of Amunet, devotee of Hathor (2160-1994 BC). Hathor was the virgin mother of Horus. As Abraham and Sarah were Horites, it is likely that Sarah's mark was like that of Amunet. This mark on Sarah, their Horite beliefs, and the miraculous events surrounding Isaac's birth, suggest that Abraham may have believed Isaac to be the promised Seed. Here again we glimpse the solar imagery of the Proto-Gospel.

I didn't think Moses would have looked European either, but the actor chosen to play the role did. The casting of a light-skinned Pharoah opposite Moses also missed an opportunity. Admittedly I was only able to watch about 5 minutes of the show however.

As Abraham and his people were ethnically Kushites there would have been a range of physical appearance. Among the Kushites were dark reddish brown Beja, red-brown Egyptians, red Nubians, black Nubians and fair Ainu (Hannu).

The "T" or Tau symbol(cross) was used in the worship of the God "Tammuz". God forbade the making of anything or image of anything in worship.. Therefore Sarah would have had no such symbol on her forehead since she was a worshiper of the TRUE God.

I assume, Anon, that when you speak of God forbidding images, you are referring to the Law of Moses which came after the time of Sarah and Abraham.

The horned alter of Israel is an apophatic image of the sun.