The Descendants of Kain and Seth

Analysis of the line of Kain (Genesis 4) and the line of Seth (Genesis 5) reveals that the two lines intermarried as was the custom for Nilo-Saharan rulers and their Habiru (Hebrew) ruler-priest descendants. The pattern of the cousin bride naming her first born son after her father can be traced using regnal lists found in Scripture. This pattern is found in the families of Abraham, Moses and Samuel, strongly suggesting that these biblical figures shared a common ruler-priest ancestry.

The cousin bride’s naming prerogative is demonstrated in the recurrence of linguistically related names: Enoch/Enosh (both mean "one who ascends"); Kain/Kenan (both mean king; Kahn is related), and Irad/Jared (or Yared, which means "descend"). 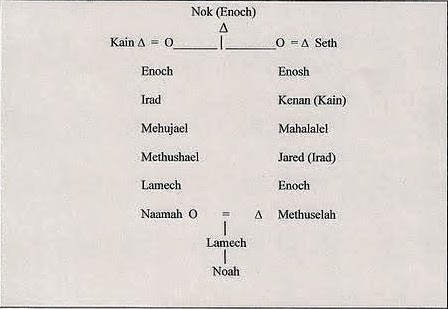 The first born sons of cousin brides did not ascend to the thrones of their biological fathers, but instead served as prime ministers in the territories of the maternal grandfathers.

This same pattern is found with Abraham. Abraham’s cousin wife was Keturah, the daughter of Joktan (Yaqtan). She named their first born son Joktan, after her father. Abraham’s first wife was his half sister, Sarah. The first born son of the sister wife ascended to the throne of his biological father. Therefore, Isaac, not Joktan, was Abraham’s proper heir, though Joktan was born before Isaac (Yitzak).

Compare this pattern to that found in Moses' family. 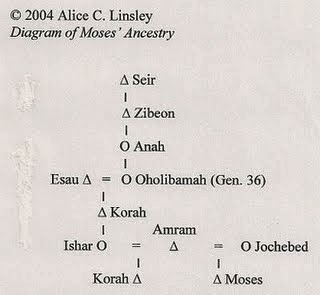 Here we note that Amram's cousin bride was Ishar. She named their first born son Korah after her father. Korah means "shaved one" and refers to the priesthood. This means that Jocheded was Amram's half-sister, as was Sarah to Abraham.

These ruler-priests had two wives. The first was a half-sister and the second, taken shortly before the son came to power, was the cousin wife. The wives lived in separate settlements on a north-south axis and their placement marked the northern and southern boundaries of their husband's territory.  Knowing this, we are able to identify the extent of Abraham's territory. Sarah resided in Hebron and Keturah in Beersheba. Based on this data, it is reasonable to entertain the likelihood Abraham's territory extended between Hebron in the north and Beersheba in the south.

Abraham would have traveled back and forth between his two wives as he attended to his various enterprises. These would have included diplomatic matters such a water treaties and mutual defense pacts, defense of his wells, the movement and care of his sheep and cattle, collecting tariffs for the movement of cargo through his territory, and metal work at Beersheba where copper was mined and smelted.

Genesis 22:19 tells us that after offering Isaac at Mount Moriah, Abraham did not return to Sarah. Instead he went to live on a permanent basis with Keturah in Beersheba. There he had built an altar and planted a terebinth. A terebinth marked the north end of Abraham's territory in Mamre (Gen. 12:6) and after Abraham's formed a treaty with Abimelech at Beersheba, he planted a terebinth there at the south end of his territory. Beersheba was both a shrine settlement and a border settlement.

Labels: analysis of Genesis 4 and 5