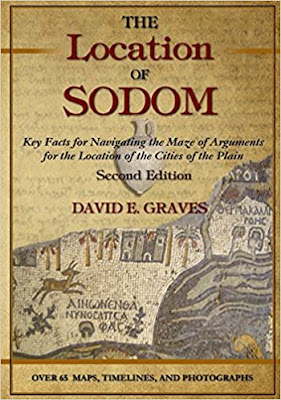 
There has been a great deal of speculation about the location of biblical Sodom. Recently, Steven Collins claimed to have found the site in Jordan. He believes that he has solid evidence that Tall el-Hammam is Sodom, and if his hypothesis is correct the conventional dating of the events and persons in Genesis must be radically revised. The pottery that Collins uncovered at Tall el-Hammam dates to a much later period. It would place Abraham and Lot in that region only two centuries before the Exodus.

Collins has received much attention by claiming that Tall el-Hammam is the true Sodom, or what scholars call the "Sodom of the north." However, he was not the first to suggest this possibility. In the late 19th century Tristram, Conder, Merrill and Thomson made a case for a location north of the Dead Sea in the southern Jordan Valley. Even after all these attempts the location of Biblical Sodom remains uncertain.

Collins' main argument hinges on his understanding of the Hebrew word kikkar or ki-kar. He maintains that this term can apply only to the wide circular area of the southern Jordan Valley north of the Dead Sea where Tall el-Hammam is located. This assertion is backed by suggestive, but far from convincing, evidence. Collins fails to look at the bigger picture and seems unaware of the linguistic evidence that kikar means a basin or circular place where there is water or at one time was filled with water or bounded by water.

Kar is a word of Nilotic origin. In Luo, for example, Kar is a noun that refers to a place that bestrides certain boundaries. It is also a verb meaning to bestride or straddle. Kar is one's stake with boundaries. Khar (ghar) was a unit of measurement used in trade in the Egyptian inscriptions (See James Orr, The International Standard Bible Encyclopedia, page 1421.) It appears to be associated with the ancient Horite traders.

Kar-nak was a Horite temple along the Nile and it may be that Abraham's maternal grandfather was a priest of this temple. Kar means place and nak refers to the ritual removal of six front teeth, a practice found among the Nilotic Luo and the ancient Natufians. Nak likely referred to rituals in general so that kar-nak would mean a "place of rituals" and in the ancient world these were water shrines.

Kar is a very ancient root KR that represents a complex of related ideas. Ki-kar refers to a circle as in Exodus 25:11: ki-kar za-hav ta-hor, meaning "circle of pure gold." In the Anchor Bible Commentary on Genesis, E.A. Speiser recognizes that kikar refers to a circle.


So it is clear that Collins' claim that "kikar" can refer only to the Southern Jordan Basin is mistaken. Tall el-Hammam is located in the circular Jordan Valley about nine miles northeast of the Dead Sea. Thousands of years ago this city would have been much closer to the water. The circular basin left by the recession of the waters is a “kikar” (ring, disk, circle), but the term can apply to more than one place.

"Kikkar ha-yarden" is usually translated "all the valley of the Jordan" (Genesis 13:10), but it simply means a circular basin with a shrine along the Jordan, or a Jordan Valley water shrine. All the Bronze Age (3600-2000 BC) cities along the Dead Sea were shrine centers in circular basins. One kikar was in the north where Tall el-Hammam is located, and another was in the south where Bab edh-Dhra and Numeria were located. Each basin had multiple cities and towns, spaced apart by a day's journey, similar to the Spanish missions along El Camino Real in California. The southern basin at one time connected Beersheba to Bab edh-Dhra, the city many archaeologists and Bible scholars believe to be ancient Sodom.

Genesis 13:10 says that Abraham and Lot saw "all the valley of the Jordan." In Hebrew this reads, "kikkar ha-yarden" and Collins insists that this refers to the Jordan Disk, not the Valley of Siddim at the southern end of the Dead Sea. He attempts to reinforce this with these additional claims: (1) The Jordan Disk is visible from the region of Bethel and Ai where Abraham had pitched his tent; (2) the area had bitumen, and (3) the battle of the kings would logically have taken place in the Valley of Siddim, as far away from Abraham's home as possible. Genesis 14:3 states that the kings fought "in the valley of Siddim."

The Jordan Disk was home to many fortified Middle Bronze Age occupations, including Tall Nimrin, Tall Kafrayn and Tall el-Hammam. Tall el-Hammam is the largest of these. The importance of the site is indicated by nearly 20-feet thick Early Bronze Age (3600-2350 BC) ramparts that surrounded the city. Situated on a major trade route, the shrine city enjoyed prosperity with numerous satellite towns. Genesis calls these "cities of the plain."

Collins believes that the evidence of a Middle Bronze Age destruction of Tall el-Hammam with the ensuing 500-year occupational hiatus strongly suggests that this northern city is the Biblical Sodom. He argues that the pottery and the cemeteries at Tall el-Hammam correspond more to the time of Abraham and Lot than those of the Cities of the Plain. However, both basins are sustained equally ancient populations. The ramparts at Bab edh-Dhra were started circa 3000 B.C. and the city thrived between 2500 and 2100. This corresponds closely to the time when Abraham would have been living in Canaan (c. 2050-1984).

The 1965-1968 cemetery excavations of Paul Lapp at Bab edh-Dhra cleared twenty seven shaft tombs with forty seven chambers in cemetery A, six tombs with single chambers on the slopes of cemetery C, and thirty shaft tombs with seventy three chambers in areas A, C, F, and G. It is fascinating to note that the majority of the graves were circular (kikar) like the “pan graves” of Abraham's Nilo-Saharan ancestors.

There is much in Collin's portrayal of Abraham that is supported by other research. For example, he argues that Abram and Lot were 'Apiru (Hapiru/Habiru) warlords who made treaties with regional rulers. The 'Apiru or Habiru (Abru in Akkadian) were an ancient caste (abrutu) of ruler-priests who excelled in war, metal work, astronomy, stone work, water management, and animal husbandry. They are called “Horim” by the Jews, which is rendered “Horite” in English Bibles. The Horite rulers were dispersed widely from Sudan to Southern India. Genesis 36 lists the Horite Hebrew rulers Edom, Abraham’s kinsmen.

Collins believes that Abraham would have fought the battle in the valley of Siddim because this was far removed from his home. However, Abraham already had a wife in Beersheba. She is the mother of Abraham’s first born son, Joktan (Yaqtan). Beersheba is where Abraham spent much of his time, and Isaac was living in the region of Beersheba when Abraham’s servant returned with Rebecca. Beersheba, to the west of Bab edh-Dhra, is situated where the eastern and western basins (kikars) of the Negev meet. "Kikar" in modern Hebrew refers to a circular space (a roundabout), suggesting a circular plain.

Collins does not believe that the Patriarchs can be dated with accuracy based on the chronologies of Genesis. However, analysis of the Genesis King Lists has confirmed that these Horite Hebrew rulers lived, married, and ruled over territories according to a pattern that can be traced to as early as 3300 B.C. among their Nilo-Saharan ancestors. Those ancestors are named in the king lists of Genesis 4, 5 and 10.

I have a question, I was hoping you could answer.

The Orthodox theology is more mystical than the theology of Rome. The priests and deacons are associated with angelic beings, as in the book of Revelation. In Roman and Anglican theology the priest stands at altar in persona Christi.

In Revelation the seven churches (lampstands), the seven stars (celestial messengers), seven oracles, seven seals and seven bowls speak of perfection in the sense of cosmic wholeness and recapitulate the seven days of creation. In Revelation, the number seven symbolizes the new creation, the restoration of Paradise, or the eternal Sabbath to be enjoyed by the Redeemed.

The seven angels with their seven trumpets are accompanied by an angelic being who offers the prayers of the saints with a great amount of incense (Rev. 8:3). This angelic being is among the hosts that stand before the throne of God and who appear with the Lord at the Judgment. Consider Deuteronomy 33:2: "The Lord came from Sinai and dawned from Seir upon us; he shone forth from Mount Paran; he came from the ten thousands of holy ones, with flaming fire at his right hand."

Priests and angels are linked in the Biblical descriptions of the coming of the Son of Man. The Orthodox Study Bible (p. 1725) notes that the angelic powers represent the Old Testament priests who sounded their trumpets during the temple liturgy (see also Jos. 6:12; 1 Ch. 16:6; Ps. 97:6).

If that's the case, then why can't women be priests, if the priests do not represent Christ, but angelic beings?

The angelic beings are priests of the Old Testament and there were no women among them.

Alice, you may seen this interesting article on Sodom and the Five Cities in Biblical Archaeology, but just in case, here is the link: http://www.aish.com/ci/sam/48931527.html?tab=y

Yes, I saw that, but thanks for the link!

Isn't it also true that the first and last priests ARE GOD?
That in Genesis, GOD makes the first substitutionary sacrifice of animals to cover the nakedness of Adam and Eve?
That then, Christ is the final Priest and the final substitutionary sacrifice for sin, the true sacrifice that the first blood sacrifice foretold?
That all human priests and sacrifices are representative, symbol, metaphor...yet we become priests, sacrifices, become participants, present in the sacrifice, through anamnesis, transubstantiation, and spiritual processes we cannot wholly fathom?

The Bible is one whole beautiful story of our origin, plight and cure, acted out live, in time, blood, life, matter and spirit.

Hi, Georgia! I hope you are well, my friend.

God is Priest, first and last. The priesthood is the office established by God that links divinity and humanity, and only one Person fulfills that: Jesus Christ, both human and divine. He is both the Priest and the Sacrifice offered for the atonement of sin.

Our redemption by the One Promised of God is indeed a beautiful story and it is lived out for all to see in our daily lives of prayer, service, worship, friendship and compassion.