The death of Jesus Messiah gives life to the world. The Incarnate One, who was from before time the Giver of Life, enters time and restores the original pattern of life through His blood. The ancients believed "life is in the blood." His sacrifice was prefigured in the sacrifice of red heifers (for purification), rams (a symbol of the invincible God), and in lambs (the rising God who justifies). His blood is precious beyond measure. 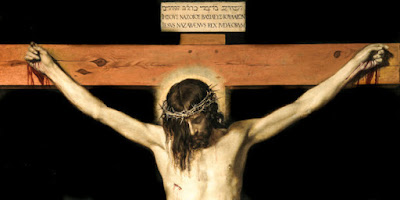 "But the righteousness wherein we must be found, if we be justified, is not our own; therefore we cannot be justified by any inherent quality. Christ hath merited righteousness for as many as are found in him." -- Richard Hooker, Anglican Divine (1554-1600)

Maundy Thursday speaks about betrayal and the institution of the Lord's supper, the medicine of immortality. Good Friday is about restoration of the original pattern of life (recapitulation) through the Life-giving Blood (and water from His side); and Holy Saturday speaks of redemption from Hades. On Holy Saturday the Church contemplates the mystery of the Lord's descent into the place of the dead. Death, our ultimate enemy, is defeated from within its own stronghold.

Matthew testifies that the Jewish authorities insisted that the tomb be secured, the stone sealed and a guard set (Matthew 27:66). They did this because the Jews feared that Jesus' followers would remove his body and declare that He had risen.The Roman seal was a cord that stretched across the stone. It was fastened at each end with sealing clay (Daniel 6:17). The seal indicated Roman imperial authority and it was a capital offense for unauthorized persons to break the seal. Very early on the morning of the first day, this outer seal was broken and the tomb was found empty.

They thought they contained Him with the Roman seal on the stone, but imagine what Christ our God accomplished during that time! In quietness He broke down the bars of Hades.

On Holy Saturday, Jesus entered the place that only the highest authority could enter. There He broke the seal of death so that He might lead captives in his train to the Father. This procession language was part of the ancient expectation that a Righteous King would rise from his tomb and lead his people to immortality.

"Now if the Jews, by looking to the brazen image of a serpent, escaped death, much rather will they who believe in the Crucified, with good reason enjoy a far greater benefit. For this takes place, not through the weakness of the Crucified, or because the Jews are stronger than He, but because God loved the world, therefore is His living Temple fastened to the Cross." --St. John Chrysostom (Homily 27, On the Gospel of John)

Related reading: Righteous Rulers and the Resurrection; The Deceiving Worm; The Lamb is Bound