Evidence of an Old Earth - Part 2


Evidence of an Old Earth - Part 1 explores how Young-Earth Creationism fails to align with the information found in Genesis. Young-Earth Creationism also fails to align with information in the various sciences. The discrepancy between the Young Earth interpretation and the evidence of the sciences is so great that many have the impression that Christianity and the sciences are in conflict. Truly, there is no conflict. The evidence from the sciences aligns quite well with the details given in Scripture.

Genesis 10 describes the dispersion of peoples that took place between 10,000 and 5,000 years ago. DNA studies have confirmed the dispersion of these Kushite peoples out of Africa. The Kushites ruled the ancient world for 7000 years according to Vedic (ancient Hindu) sources. Genesis 6:4 calls these rulers the "mighty men of old."

Abraham's ancestors named in Genesis 10 and 11 were ethnically Kushite. One of those ancestors was Nimrod whose kingdom was in the Tigris-Euphrates Valley. The language of his kingdom was Akkadian, an Afro-Asiatic language. The Akkadian lexicon (vocabulary) is more African than Asiatic.

Archaic humans were widely dispersed long before the Kushite dispersion described in Genesis 10. A 2013 report in Nature showed this map with the location of Middle Pleistocene fossils in Northern Spain (shown in yellow), Denisovan finds (blue), and Late Pleistocene Neanderthal finds (red). Ancient DNA has been recovered from fossils at these sites.

On the Arabian Peninsula, the Qafzeh population used tools 125,000 years ago at Jebel Faya. These people likely came into Arabia from Africa.  The migration of peoples out of Africa begin between 120,000 and 100,000 years ago. Subsequent migrations were caused by climate change, especially as the Saharan began to dry out. The most recent migration of peoples from Africa took place around 6000 years ago into Anatolia, Bactria, Hungary, Romania and Bulgaria.

The dispersal of human populations is confirmed by comparative linguistics. A 2013 report on phonemes (distinct units of sound) in 500 languages traces them back to a prehistoric mother tongue in Africa spoken at least 100,000 years ago.

Scientists have found that every language can be traced back to a long-forgotten dialect spoken by our Stone Age ancestors in Africa. The further away from the point of origin of the mother tongue, the fewer phonemes from that language survive. English, which developed from German, preserves many of the phonemes of the reconstructed prehistoric language.

Notice the area through which the peoples of Africa entered the Arabian Peninsula. Genesis tells us that this area was populated by Abraham's ancestors, including the clans of Dedan, Sheba, Raamah, and Joktan. The Joktanite clans still inhabit Southern Arabia. 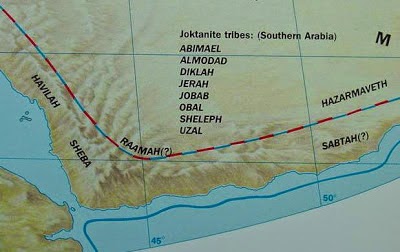 Human artifacts also testify to an old Earth. Ostrich eggshell fragments, dating to 60,000 years ago, have been hailed as the oldest example of symbolic written communication. The unusually large sample of 270 engraved eggshells were mostly excavated at Diepkloof Rock Shelter in South Africa. 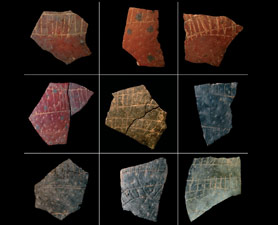 The Ishango bone (shown below) is a bone tool, dated to about 25,000 years ago. It is a dark brown length of bone, the fibula of a baboon, with a sharp piece of quartz affixed to one end, perhaps for engraving. The fossil has three rows of tally marks along its length. It may have been used to multiply or as a calendar.

Humans made reed mattresses 77,000 years ago in South Africa. That is where the oldest mattress— made from compacted grasses and leafy plants— was found at Sibudu Cave in KwaZulu-Natal. In this same region a stone carving of a python has been found that dates to 70,000 years.


There is the evidence of mining in South Africa between 80,000 to 100,000 years ago. These are major mining operations that included quarries and tunnels. It is estimated that a million kilos of red ocher ore was excavated from several mines. At one mine half a million stone-digging tools were found. The red ocher was ground to power and was used globally to bury rulers. Anthropologists agree that the red ocher symbolized blood and suggests that the people believed in life after death. The practice may have been connected to the hope or expectation that the ruler might rise from the dead and lead his people to immortality.

Burial sites and even ancient cemetaries reveal that archaic peoples practiced ritual burial. The use of red ocher in burial was widespread in prehistoric times. It indicates that archaic peoples believed in life after death. A man buried 45,000 years ago at La Chapelle-aux-Saints in southern France, was packed in red ocher.

The "Red Lady" of Paviland in Wales was buried in red ocher about 20,000 years ago. Her skeletal remains and burial artifacts are encrusted with the red ore.

The ‘Fox Lady’ of Doini Vestonice, Czechoslovakia (near Russia) who was buried 23,000 years ago, was covered in red ocher.

A 20,000 year old burial site in Bavaria reveals a thirty-year-old man entirely surrounded by a pile of mammoth tusks and nearly submerged in a mass of red ocher.

In the La Braña-Arintero cave in the Cantabrian Mountains of Spain, 7000 year old skeletons were discovered in 2006. The bodies were covered with red ocher.

Two flexed burials were found in Mehrgarh, Pakistan with a covering of red ocher on the bodies. These date from about 5000 BC. All of these burials predate the time calculated by Young-Earth creationists for the creation of the world.


Paul Sereno unearthed 10,000 year old skeletons at Gobero in Niger. These were buried on the edge of a paleolake on the northwestern rim of the Chad Basin. The Gobero site is the earliest known cemetery in the Sahara and the skeletons found there indicate that some individuals were at least 6 feet tall.


At the time of the Gobero populations (9700-4400 years ago), humans were dispersed globally, and these populations were not destroyed by a worldwide flood. Consider the following population estimates by urban center between 2400 and 2200 BC, the time when Noah's flood would have occurred:

The Natufians populated an area that includes Palestine, Jordan, Syria, and Lebanon between 15,000 and 9,000 years ago.The British archaeologist Dorothy Gerrod coined the term "Natufian" because the remains she studied were found in a cave at Wadi an-Natuf in Palestine.

There is no evidence that any of these peoples were wiped out by a worldwide flood. The evidence simply does not support the interpretation that all the peoples of the earth were destroyed in a catastrophic global flood and that the earth was repopulated by Noah's descendants. What we have in Genesis is a description of Noah as a Nilo-Saharan ruler in the region of Lake Chad during the African Humid Period. The region was already wet and apparently is was inundated after a prolonged monsoonal season. From Noah's perspective, the whole world was under water.


About 4000 years before Noah people were using dugouts to navigate the rivers of the Sahara. This is attested by the discovery of an 8000 year old dugout in Dufuna in the Upper Yobe Valley along the Komadugu Guna River in Northern Nigeria (shown above). This general region was much wetter at the time that Cain, Seth and Noah ruled there. Many of the major waters systems were connected so that it was possible to travel between the Atlantic coast and the Nile River.

Noah was a ruler

The Nilotic rulers kept personal menageries.  In his private zoo in Nubia, Akhenaten kept lions in domed buildings, antelopes in pens, and cattle in an enclosure made of sticks and branches. Before his time, the rulers of the Horite shrine city of Nekhen kept menageries and provided royal burials for the animals that died (see image below).

Nekhen has more animal burials than any early Nile Valley urban center. Noah was related to the rulers at Nekhen. It is likely that Noah, as a ruler, had his own menagerie. So the account of Noah saving animals aligns very well with the archaeological and anthropological evidence.

Scientific analysis of the marriage and ascendancy pattern revealed in Genesis 4 and 5 makes it clear that Cain and his brother Seth lived when there were human settlements along major rivers, boat building, fishing and hunting, tool production, textiles, pottery, religious traditions, such as animal sacrifice, ruling families, and an established pattern for marriage among the ruling houses. Nilotic rulers were building pyramids at the time that Cain lived.

Related reading: Ancient Water systems Connected the Nile and Central Africa; When the Sahara Was Wet; How Big Was Noah's Flood?; Boats and Cows of the Proto-Saharans; Nilo-Saharan and Saharo-Nubian Populations; The Ancient Egyptians Were Sea Faring; Sodom, Gomorrah, and the Seismic History of the Dead Sea: Support for Biblical History – Yes! Support for a Young Earth – No!

"An example is Havilah (Gen. 2:11), which refers to a region in the Upper Nile Valley." AL

Compare to your map of Arabia Felix - Havilah, near Sheba